“Mom, you’re making a big deal out of this.”

A phone call yesterday from my son, a mere 785.2 miles away and less than 48-hours after ‘this’ occurred, to tell me what I ironically believe not to be true. I really am NOT making a big deal out of ‘this.’

A BIG DEAL would have been dropping the phone and screaming in the middle of the restaurant when he first texted me the news. A big deal would have been dashing out of the restaurant without paying the bill or saying good-bye to my friends and driving straight to the airport for a two-and-a-half-hour flight to comfort him or driving eleven hours and 48 minutes just to reach him, hold his hand, coddle him.

Uncontrollable tears would have been a big deal, sobbing like there was no tomorrow when we finally spoke on the phone as he confirmed the life-altering news.

Luckily for all involved, I don’t panic in situations that might cause distress for others. I always remain calm, on the exterior, in the face of adversity, especially when it affects those I bore. I take my own quiet course of action instead of getting sucked into the drama of others.

And I am definitely NOT making a big deal out of ‘this.’

‘This’ being an ACL tear to his right knee. Not his dominate lefty-big-kick leg, but still an ACL tear coming during the light, spring soccer season of his junior year in college, and at a practice, no less.

Our son first stepped onto the turf at the tender age of four when on Saturday mornings this rough and tumble tow-head needed to burn off some energy. He quickly developed into a player with enough athletic ability and vision of the field to make a travel soccer team by the age of eight. If you know anything about travel sports, it became his life, our life, for the next ten years. He was lucky enough to take his talents to play at the collegiate level.

And if you know anything about ACL tears, you know it will take nine-twelve months to make a full recovery. In the hard-knocks reality of life, not nearly enough time for him to make it back to the field in time for his senior year of soccer. Game over. Just like that.

So no, in spite of the tears that want to come for all he has worked for and for what he won’t be able to finish, I am not making a big deal out of ‘this.’ And the reason for my composure is because of him: his amazing attitude toward this sudden change of events, his resiliency in the face of adversity, his ability to pick himself back up during the most trying of circumstances, and his maturity to be able to tell me, in no uncertain circumstances, “I got ‘this.’”

So proud. So relieved. He will be fine.

He has told me so, and I firmly believe his confirmation to be true.

He is fortunate to be in a city with a top-notch facility and surrounded by a staff that is taking care of him as I type these words. The day after the accident, the trainer already had him starting physical therapy on a stationary bike. The orthopedic surgeon who treats professional athletes, and oh by the way, my son, called me the SAME DAY he examined my son. My son has the utmost confidence in these people. He’s got this.

I’ve repeatedly told our son that I will fly to him on a moment’s notice, but he already knows that. What he doesn’t quite understand is my maternal instinct, the almost primal need to be there with him. I’ve honored his wishes and his own need to handle the situation on his terms, as difficult as that has been these last few days. The day will come soon enough when I will be with him as he recovers from surgery, when he might need his mom one more time.

Despite the recent turn of events to which we now adjust, I am completely in awe of the fine young man he has become. I’ve been his biggest cheerleader throughout his soccer career, and I’ve always been granted the first sweaty hug after a game. While I treasure these memories and knew one day the soccer field would be behind us, I am amazed how quickly he is transitioning from boy to man, how everything he’s learned at home, in the classroom, and on the turf, has clicked and prepared him for this unexpected event in his young life.

Sure, there will be tough days ahead, full of discomfort and PT and hard work, and yes, more disappointment. His resilience will have to shine through then as well.

For now, I’m not going to make a big deal out of this, because he has clearly shown, he’s got this.

It’s Not About The Sport: A Dad Gets Ready for His Son’s Last Game

What Happens When Your College Graduate Doesn’t Have A Job?

A conference coordinator, a middle school English teacher, and a stay-at-home mom. are a few of the life experiences Jackie Tricolli has had on her way to rediscovering her passion for writing. Currently she blogs personal insights and essays related to her experiences as the care-taker of two rambunctious boys and what it now means to be an empty-nester. Born and raised in Pennsylvania, she lives in the suburbs of Philadelphia where she revels in the changing seasons. Jackie’s insights can be found at www.scribingwithscout.com. You can follow her on Facebook and Instagram.

Home / Articles / College/Off to College / College Sports / After A Devastating Sports Injury, My College Junior Said, “I Got This”
FacebookPinTweetEmail 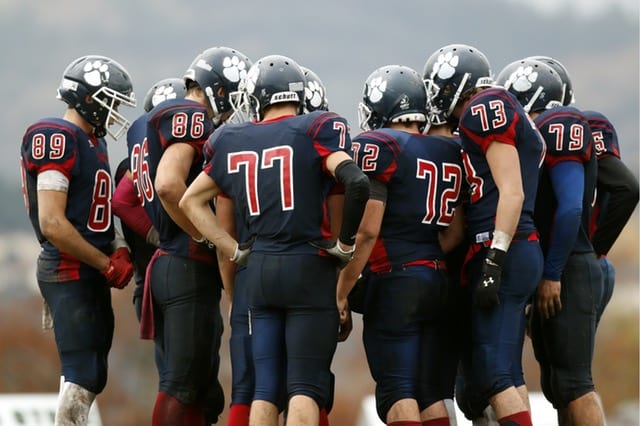 One of the most significant and stressful times for families of college-bound students is the college search, and it’s more complex when your student is also an athlete. You’ve probably talked to other parents in the stands about recruitment and playing sports in college, but when it comes time to support your athlete, it helps… Dear Fan in the Stadium Who Called My Son a “Jerk” During The Football Game, As his mother, I would like to address you now because it’s taken me a few weeks to calm down and no longer have visions of turning around, marching up the bleachers to your seat and physically throwing you down…