Something amazing happened last week. While he was home on Spring Break my son talked to me about everything my husband and I did right when he was growing up.

Yes, you read that correctly.

He talked about what we did right. I had to check my Find Me app to make sure I wasn’t in another universe. To put the comment in context, our oldest is just getting done with some of his first interviews for a real job. He finishes his bachelor’s degree in May and he said:

“Mom, I had so many things I could tell them about the things I did in high school and college; the leadership positions I had, the ways I worked the difficult stuff.”

“Those are all things you did; not us,” I replied.

He said “Yeah but you guys pushed me to do them. I talked about how I was making my own doctor’s appointments when I was 10.”

With a furrowed brow, I said, “Well I’m not sure it was quite that early but at least by 15.”

(Soon he’ll think he gave birth to himself.)

He continued, “The stuff when I was little like the food drives and toy drives we did. It was easy to do stuff at college cause I wasn’t afraid of it. I even told them I had a dog sitting business and made actual invoices for my customers.”

“Is that stuff he asked?” I questioned.

“He just asked how I was prepared to work for them and I was able to reel things off. So, thank you guys.”

I smiled one of those awkward smiles I do when I’m trying not to show my glee at the moment. It was kind of strange to get complimented on all those hours of begging, fussing, pleading and convincing that what we were doing mattered. Now it felt odd to pause and think that my husband and I actually did some things right.

More importantly I realized how grown up my oldest son was becoming. He was smart and strong, and remarkably capable of moving through life.  I mean if he had the guts to tell his mom he thought she and dad had done okay; well, the maturity meter just bounced past way to go green and into cool parenting purple.

At the same time I felt a twinge of sadness. In my mind he was still that little 2 year old boy I coached out into the rain to grab up his toys and bring them in from the storm. He was still that 5 year old boy looking down at a baby bird that had fallen from its nest and died.

“Why didn’t his momma save him?” he asked.

Me, shading my eyes and looking up into the tree: “I’m sure she tried, hon.”

Fast forward 17 years. He’s a 22 year old man now. A man I am proud to call my son but, I sure miss that little boy. I worry he is gone and I’ll have to be happy with the memory of that sweet little guy.

Later he was laying on the couch at the house watching television.

“If I turn it just right I can fit my whole iPhone in my mouth.” he said.

And his mommy will always try to protect him.

What Going Home Means to My Grown Sons

Grad Gifts for Your Off-to-Work Kids 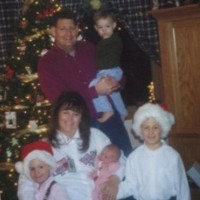 Dianna Flett is a leader, entrepreneur and mother of four boys. Her goal in life is to not raise jerks and to always choose a path that will provide lessons to help her boys “grow away.” After a successful career as an Army Officer, Dianna, a decorated combat veteran, uses her military training time and again to find approaches and techniques to navigate parenting leadership challenges. She also drinks wine when needed. Dianna’s life has taken her from the battlefield, to the PTO, to the FBI and now to continued service as CEO and facilitator of a program she created called Girl Smarts. Always on the front lines, she hopes to share her thoughts in a way to provide vision and solace to other parents looking to survive on the parenting battlefield.