My youngest son walked into my home office and leaned against my desk as I checked flights from the small airport only a few miles away from our home to his college 500 miles away. In a few short months he would move into his dorm and start his freshman year. I looked up to ask him whether he wanted to take an early morning flight or one in the afternoon. With a pained look not unlike a boss having to fire yet another employee, he told me he needed to talk with me about something. My son and I have a close relationship, but he has always been a die-hard daddy’s boy, so I wasn’t surprised he wanted his role model to take him to school. What did surprise me was the way the news hit me at my core. I felt a lump in my throat. My heart felt deflated as if someone had stuck a pin through it. For once, I didn’t know what to say and I couldn’t help the way I felt. My youngest son was leaving and I wasn’t going to be the one helping him move everything into his dorm room or sharing every organizing and design trick I knew or meeting his roommate and his parents.

I could have insisted I go, too, (my ex and I get along well), but the weekend was about my son, not me. I respected his feelings, kept mine to myself and mentally prepared to miss a life event that I knew meant more to me than to him.

A few days before he left, my son and I sorted through the overflowing clothes in the closet and drawers at his dad’s house. Helping him weed through shirts, pants and sweatshirts he hadn’t seen or worn since middle school was a cross between the book Where’s Waldo? and an episode of Hoarders. How had he been able to find anything to wear all these years? Yet two hours and eight donation-filled, kitchen-size garbage bags later, he narrowed down what he was going to take to school. We tightly packed everything from jeans to shirts to shoes — too many shoes —into two body-size duffel bags.

Until I zipped up the overstuffed canvas bags, I hadn’t realized how tough it was going to be to see my youngest go. If it took me two years to get used to him being away at camp for a month each summer, how long was it going to take me to get comfortable with him being away for months at a time? My emotions, from looking forward to this new chapter in his life, to dreading it, went up and down faster than the teeter-totter he loved as a child.

The night before his early flight to school, my son came over to say goodbye. I walked him to his car and as I stood on my toes, wrapped my arms around his neck and hugged him, thinking if I hold on tight enough, he can’t leave, he said, “Mom, it will be okay.” And through my tears I said, “I’m so proud of you…and I’m not crying.” We laughed, he left and I went back inside, officially a puffy-eyed empty nester. As many times as I had asked him to turn down the early morning music or close his bedroom door during his late-night guitar sessions, what I would have given to hear something other than the deafening sound of an empty, son-free house.

The next morning, when parents from around the country were moving their kids into college dorms and later taking them out to dinner for one of the last decent meals they would have until Thanksgiving break, I was home by myself staying busy and keeping my mind off what I was missing so many miles away. When I walked past my son’s room, I couldn’t bear to look inside. I even closed the door but that didn’t stop me from thinking about him. What was he doing? Did he have everything he needed? Were his roommate’s parents nice?

I selfishly thought about why I didn’t insist on going along. I could have flown in that morning and come back that night. I was sad, upset, and as much as I hated to admit it, a little angry that I wasn’t part of his big day.

A few minutes later the phone rang. It was my son calling to FaceTime with me. I said hello and he said the four magic words moms with teenagers rarely hear, but always cherish: “Can you help me?”

He pointed his phone at the clear packages of bedding piled high on his dorm room floor and then asked what order everything needed to go on the bed. Considering we had picked out a twin xl mattress protector, cover, sheet set, foam pad, comforter and pillow sham, I understood his confusion.

Originally he set the phone on the floor and gave me an ant’s view of what he was doing, but then propped the phone on his roommate’s perfectly made bed. While my son was making sure I could see what he was doing, I was making sure he couldn’t see the tears in my eyes (this time, happy ones). I couldn’t help it. I was thrilled he needed me and grateful for the brilliant technology that brought us together.

Two weeks later, thanks to Southwest Airlines’ low Tuesday fares and my son’s light Tuesday schedule, I visited him bearing homemade cookies and a few things he had forgotten to bring.

After lunch and a quick tour of his dorm with rooms still smaller than a walk-in closet, we walked to the bookstore. Along the way he pointed out the old brick buildings where he had classes and the recently built dorms where his friends lived. We did everything we would have done if I had been there on move-in day, minus the stress, chaos and separation anxiety (by the parents, not the students).

During the short flight home I realized that instead of seeing my son’s college move-in day as a one-time event, it was just one in a series of experiences that will make up his formative college years.

That doesn’t mean I’m not going to help him move in next year…it’s my turn. But until then I’ll be available to help him virtually —physically too if Southwest keeps offering low fares — starting with his latest text:

“I accidentally left a pen in my pants pocket while doing laundry and it stained two shirts. Can you help me?” 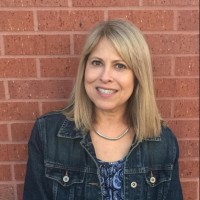