My first baby is 19 years old.

She just finished up her freshman year of college and is back home for the summer.

According to post after post I’ve been seeing on social media lately, I’ve already burned through a lot of parenting real estate. I have a lot of mom mileage in my rearview mirror. I’ve used up the 940 Saturdays between my child’s birth and when she left for college.

I’ve emptied out the jar of 936 pennies representing all the weeks I had to raise this child.

But I don’t feel either of those things. I’m sure part of it—probably a big part—has to do with the fact that she hasn’t completely moved out or moved away or moved on…yet. But I think the other part—probably the biggest part—is that during all those weeks and summers and Saturdays, I didn’t feel like I was counting down to anything. I felt like I was counting up to something.

I didn’t feel like I was emptying anything out. I felt like I was filling something up.

I didn’t feel like I was using up anything. I felt like I was storing up something.

Trust that goes both ways.

Time spent together by choice.

Joy. Pride. Encouragement given and received.

A friend who knows me better than almost anyone else but likes and loves me anyway.

Someone who worries about me sometimes the way I worry about her.

A gift to myself and others.

Gratitude for the past. Hope for the future.

All those years ago, I didn’t have a baby just to have a baby. I had a baby to bring a new life into my world and into the world at large—and to make both those worlds better. Which she has.

Over the first 18 years of that baby’s life, it was my job to teach her and correct her and train her and support her and guide her and provide for her. But the salary for all that teaching and correcting and training and supporting and guiding and providing is still paying dividends. In some ways, I feel like I just cashed the check and am starting to enjoy spending it.

I know that in a lot of ways, I have to let this adult-in-the-making of mine go, even though she’s still here a lot of the time.

I know I have to let our relationship shift, as it should.

I know I have to step back and step away.

I know I can’t expect this summer to be like the first 18—even though every one of those 18 was different from the one before it anyway.

But for all the looking back I’m doing these days, I’m looking ahead, too.

For all the letting go I’m doing, I’m holding on to so much more.

Hands Off Parenting: The Surprise of Letting Go

Style at Grown and Flown: End of the School Year Events 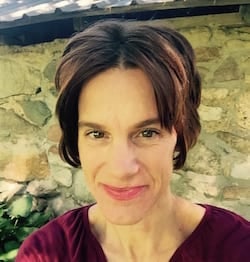 Elizabeth Spencer is mom to two teenage  daughters. She’s been married for 21 years to a very patient husband who carries on valiantly as the token male in a house of estrogen. When she’s not avoiding housework by spending time on her blog, Guilty Chocoholic Mama, or on Facebook, she plays the piano badly, bakes chocolate-chip cookie that cover a multitude of maternal sins, and tries to keep up her lone talent of being able to stand on her head.