There’s a member of our family we don’t see much anymore. His absence isn’t due to illness or long distance or a falling out, but because he became…obsolete. This family member is Lala, the beloved childhood lovey of my daughter and soon-to-be high school graduate, Ellie.

The powder blue elephant/blankie hybrid was originally a baby gift given to our older daughter, Cassie—the small holes in the fabric above his blanket binding are where her name had been embroidered—but she never really warmed up to him. Ellie, however, adored the soft plushie, and he quickly became her go-to source for comfort and companionship.

His name is an abbreviation of what came out of her toddler mouth when she cried for the “elephant” at bedtime: “Elala! Elala!” I can still see two-year-old Ellie in the crib, rubbing Lala’s silky hem between her tiny fingers as she drifted off to sleep. Lala is well-worn now—his plump, stubby arms have been sewn back on numerous times—but he has held up nicely considering the amount of washing he required over the years. We had no backup elephant to appease our youngest child; no other plaything was a suitable substitute for the original, hand-me-down friend. For nearly a decade, Lala was a prominent fixture in our home. Some of Ellie’s oldest friends might remember him from playdates or sleepovers in elementary school. (Or perhaps the elephant with bright blue eyes and a satin heart was hidden away during those visits because Ellie was afraid her friends would make fun of her for playing with a “baby toy.”)

Lala also accompanied us on family travels to the Bahamas, Canada, Connecticut, Delaware, England, Florida, Maine, Massachusetts, New Jersey, North Carolina, Virginia, and countless towns throughout our home state of Pennsylvania, including Hershey, where a sympathetic hotel staffer shipped him home after he was inadvertently left behind. My children will never allow me to forget the Christmas I “ruined” when I forgot to pack Lala for the annual overnight trip to my mother’s house. Ellie wept quietly in the back seat and insisted we listen to every sad love song that came on the radio during the entire Christmas Eve car ride.

Ellie’s sadness over her separation from Lala that night reminded me of an emotional scene in Toy Story 2, the 1999 Pixar film that played on loop in our home when our children were very young. In the scene, the character Jessie, a cowgirl doll, explains how she was once loved by a little girl named Emily who grew older, forgot about Jessie, and eventually gave her away in a box of old toys. Peak heartbreak is achieved as the melancholy song “When She Loved Me,” sung by Sarah McLachlan, plays over the montage of memories.

Every member of our household understands that certain songs cannot be played in my presence because I become overwhelmed by a crippling combination of emotions. “When She Loved Me” is one of those forbidden songs. Even hearing the tune hummed makes my eyes well up; I just can’t handle it. My disproportionate reaction to the song is a running joke for my kids: Let’s sing “When She Loved Me” and see if Mom cries again!

What my daughters fail to recognize is that it’s not the song’s wistful lyrics or Jessie’s devastating love story that leave me inconsolable, it’s what giving away that box of old toys represents: a young woman shedding the trappings of childhood as she becomes an adult. Emily no longer needed her best friend, Jessie, and while that confidence and maturity are good, natural parts of growing up, the idea of reaching the end of childhood and discarding someone who had been such an integral part of that life stage is too much for this old cowgirl to bear.

I have been informed that Lala will not be moving into the freshman dorm with Ellie this fall, and it was suggested I add him to a box of childhood mementoes that’s collecting dust in our basement. I won’t do that. Instead, when Ellie leaves for college, Lala will take his rightful place at the head of her bed at home, a reclining reminder of who she was and what helped make her the person she is today. Though Lala has certainly earned a comfortable retirement from his duties as Ellie’s constant companion, his role as a symbol of her journey through childhood is still essential.

As the next scenes of my daughter’s movie unfold, I hope she carries with her the sureness and security that powder blue elephant gave her so long ago. I also hope she realizes that lyrics from that forbidden song describe the last 18 years of my life with her better than I ever could: “Everything was beautiful/Every hour we spent together, lives within my heart/And when she was sad, I was there to dry her tears/And when she was happy, so was I.”

This Mom Decided to Talk Less and Listen More

A Love Letter To My Teenaged Son’s Hoodie Sweatshirt

29 Best Ways to Make A Dorm Room Feel Like Home 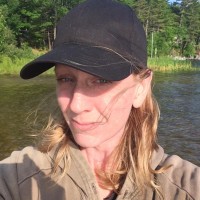 Kate Rosin, a freelance writer and editor, lives outside Philadelphia with her husband, two daughters, two dogs, and the occasional foster child.
You can find her on Facebook,
Twitter and Instagram.