Joy cannot exist without sorrow. Ghosts are the embodiment of both: joy from their memory, sorrow from their absence. Life is a constant balance between antipodes, which is why melancholy is such a good word: It describes the simultaneity of joy and grief.

All of these come into play when a child leaves for college, except the child is not, in this case, the ghost. Her childhood is. The joy comes from launching the baby bird. The sorrow hits the moment we watch her fly away.

I know. I’ve been down this road before, two years ago with my son, now 20. In fact, I can already tell you how graduation, then the rest of the summer, will play out. We’ll arrive at commencement. It’ll take forever to get everyone seated.

The first notes of “Pomp and Circumstance” will ring out. These notes—I’m crying even as I write this—these notes will trigger a deep ache in my belly where my beaming graduate once floated. I’ll burst into tears. The rest of the day will be a blur, not unlike the lost hours after Dad’s funeral.

The rest of the summer will be filled with work, for both my daughter and me—her loan debt will be intense, I’m the single parent raising her—plus the small details of sending a child off to college. The pre-college chores will keep us both from brooding over her upcoming departure: the extra-long bedding that needs to be procured; the bank account that needs to be opened; the Canada Goose down coat, like her brother’s—they will be attending the same college—that will set me back a week’s salary. Without it, she will not survive Chicago’s winters.

So be it. We’ll eat rice and beans that week. It’ll be OK.

But even though I will be buying my daughter the same absurdly expensive goose down jacket as her brother’s to protect her from the same absurdly bitter cold, there are many other ways in which protecting her from the rest of life’s winds will be impossible. As much as I wish it weren’t so, sending a daughter off to college is simply different than sending off a son.

I don’t claim that my experience with crime during my college years is in any way indicative of crime in general against women on campus, but insofar as these things happened to me, they’re worth listing:

1. An attempted rape in my dorm room by a homeless man, who broke and entered while I was there typing a paper alone.

2. Mugged at gunpoint in a taxi.

4. Kicked unconscious in the middle of Harvard Square on the early side of a busy school night.

5. Attacked and molested by three drunk college kids on my way home from a video store.

6. Attempted molestation by two boys in my documentary film class, as we were celebrating finishing our film.

7. Date-raped on the eve of my graduation.

[More on rape and what college students (and parents) need to know here.]

This is a ridiculously long list, I know, and God willing none of our daughters will have to experience that level of trauma or even one such incident, but they nevertheless give me pause not just for my daughter, but for every young woman entering college.

Aside from saying be careful, there is nothing I can do

They say that trauma is often reawakened when our children reach the same age as we were at the time of our abuse. I can vouch for this. I don’t even have to be asleep these days for the bad dreams from those bleak crimes to haunt me. The worst part is that, aside from telling her to be careful, there’s not really the Canada Goose-down-jacket equivalent for protecting her from human nature.

The best I can do, while we shop for those extra-long sheets, is to warn her what could happen in that bed. While we open her bank account, I can tell her to try to never to be alone when she takes out cash: Wait for ATM machines to be a bit busier or take out cash in the daytime. And while we look for the coat, we can chat about what it means to be a warm-blooded woman in a cold-blooded world.

It all comes back, once again, to antipodes. The freedom our boys generally take for granted is an illusion when you are female. My son can take the subway at any hour. My daughter can’t. She already knows and accepts this, as much as it makes her angry. Now she must learn to swallow more inequity. For every flight from the nest she will try to take, there’s a potential man standing there in the shadows, waiting to clip her wings.

It’s just the way life works. And always has.

Hopefully my daughter can simply spend her time in college reading and thinking about these truths instead of experiencing them. But I know when I say goodbye to her on the campus green, the same way I said goodbye to her brother two years earlier, the pit in my stomach will not just be the one formed by the melancholy of saying goodbye to a child. It will be joined by a different pit—the pit of dread—from knowing that I cannot protect her from the world. 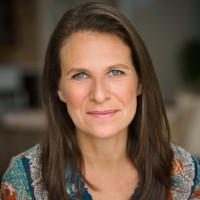 Deborah Copaken is the NYT bestselling author of THE RED BOOK, BETWEEN HERE AND APRIL, SHUTTERBABE, HELL IS OTHER PARENTS and The ABCs of Adulthood: An Alphabet of Life Lessons.
Her writing has appeared in The New Yorker, The New York Times, The Wall Street Journal, The Nation, Slate, and The Financial Times, among others.