As we turned out of the parking lot after college drop off, the empty bins rattled around in the hatch of the car, much like the thoughts rattled around my brain. My mind raced from images of yesterdays when he was still in our midst to worry that I didn’t convey everything when I had the chance and finally fear for the both of us.

This is what it is like to die, I surmised. Life flashes before you and you clearly see the scope of it up close. Then the pain of its incompleteness consumes you. 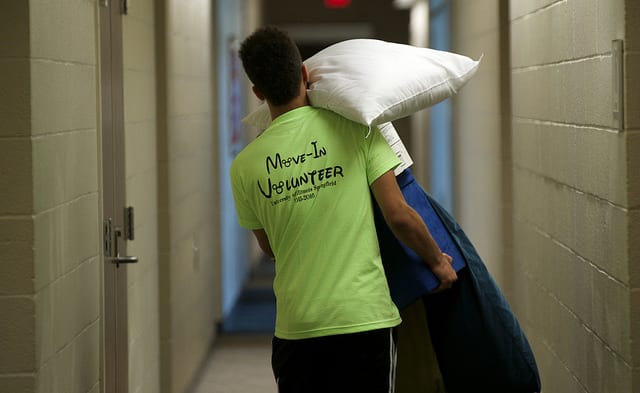 Seventeen years of parenting had boiled down to three words, “Go be great.”

I’m not sure I would have expanded on that even if we had been afforded the time but I will never know. Three words, one hug and then seven hours would separate us.

The entire college drop off process is chaotic by design. It doesn’t give parents or students time to really absorb the enormity of what is transpiring. It’s all about comforter sets, micro-fridge rentals and storage space until finally the only thing left to unfold is goodbye.

[What Happens After You Drop Off Your Youngest Child At College here.]

We have perused all the articles designed to help us through this very moment, yet nothing makes the reality bearable. I couldn’t read my son’s face but I know his heart like my own and instinct told me it was aching just like mine. He had the luxury of friends who had followed us to the car. They lounged by a dumpster filled with flat screen television boxes ready to scoop him up after we left; bringing me some measure of comfort.

At the suggestion of a friend, my two younger sons had chosen an item from home to leave with their brother. They chose the only book we owned that held their attention as toddlers. Back in the day, if we got through a story without bloodshed or tears, it was like experiencing a miracle right there in the family room. In time, the binding came apart and pages ripped, so I recently bought a replacement. Perhaps subconsciously anticipating it would again be our glue.

The friends all gathered to spy the book and the picture of the boys taped inside the front page with a note. Even in that photo, my eldest was the leader propping up his brothers with a smile. Was he being brave right now to bolster them?

Part of me wanted to see his stoic and strong side, ready to face this new chapter. Yet there was another equally strong tug to glimpse some vulnerability to prove he still needed me. He chose the former and never flinched when I held him and said goodbye.

This confidence was a good thing, so why did it feel so jarring and wrong?

On the surface, we laughed, joked and smiled as we milled around the car. Once sheltered inside its confines, however, the fissures began to show. Like an x-ray, the open road had exposed our breaks and the tears came.

We no longer had to pretend that we were alright. This was uncharted territory for all of us and we were heading out without our compass, scared and vulnerable. It all seemed so backwards. I mean shouldn’t it be the other way around?

Turns out, the answer is no.

Just off campus, we stopped for gas. The two younger boys and I went into the convenience store to buy snacks for the first leg of the trip home while my husband filled the tank. We were like trauma victims. We wandered around aimlessly, bumped into each other and could not decide on a purchase.

The store clerk eyed us up as we meandered through the aisles, our eyes red and faces blotchy. Once at the register she asked, with a measure of suspicion, if we were ok.

Although I wanted to spill out our whole story and justify the odd behavior, it was too much effort. Instead I simply replied, “Not today, but we will be. Eventually we will all be ok.”

[My College Freshman Went to the ER: What This Mom Learned here.]

Saying those words out loud gave me clarity. Just like those empty bins, I had served my purpose. Over the years, I had packed him with everything he would need to settle in without me. All the essentials I worked so hard to stow in his brain would be at the ready when he required them and serve as a map to guide him on this new journey, alone.

It was a tearful week and we are missing him tremendously but with each passing day, my hopes for him overshadow the fears. I take solace in those hopes and they make me feel very full indeed.

All The Wrong Words to Say at College Drop Off

Home / Articles / College/Off to College / College Drop Off Is Traumatic: How to Survive
FacebookPinTweetEmail