The Harrowsmith Cookbook (Volume 1), published 35 years ago, has a recipe for Sole Florentine on page 123. This was the first dinner my husband-to-be cooked for me shortly after we met in the summer of 1984. The book has survived several moves in lockstep with the progression of our life as a couple—from university accommodation in London, Ontario to our family home in downtown Toronto, where it now sits on the shelf in our kitchen.

The glue has disintegrated from its spine, and the Index stops at “Roasts” because several pages are missing from the back. You have to flip through by hand to find Strawberry Cheese Pie, Tuna Casserole or Wacky Cake. But who would want to anyway? We eat differently now. 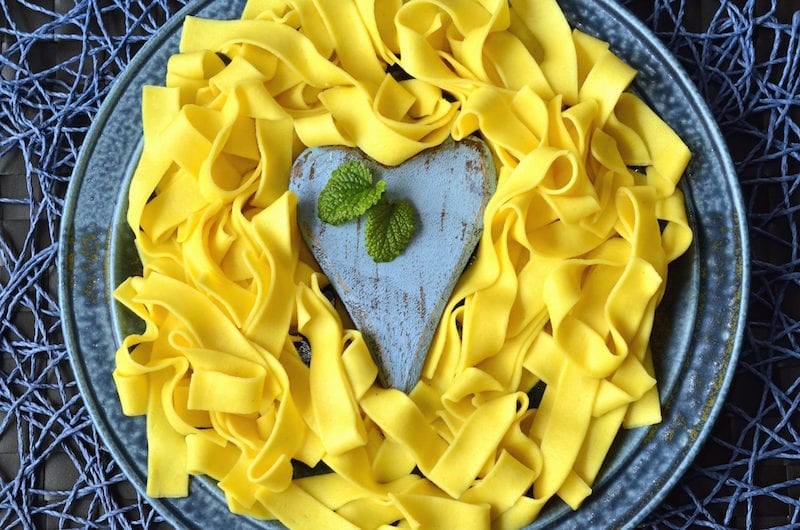 The book remains on our shelf not for function but as a nostalgic touchstone of our early romance. When I stare at its cover of autumn gourds of various shapes and colors, I recall the giddy nervousness of my university-aged self as I watched my new beau confidently serve me his culinary creation. I didn’t know any boys who could cook, or at least none who had made me anything more complicated than popcorn (which was only marginally more pathetic than Bisquick spinach pie, my personal gastronomic apex).

That first dinner was more than thirty years ago. We now have two sons, almost the same age as their dad was when I met him. When they were preparing to leave home to attend university far away, I was determined to send them off with the skills and confidence to cook.

It wasn’t an original idea. My mother-in-law had compiled a recipe card box for her son as he flew from the family nest. It is filled with recipes reminiscent of my husband’s childhood dinners. I rifle through it from time to time to fish out my mother-in-law’s recipe for Chili Con Carne, admiring her perfect schoolteacher’s handwriting, now faded like her memory has been by dementia. She has no recollection of the box, its precious contents—or the gift she gave me as a role model.

As a mother of sons, I assumed the same responsibility to raise them to be full domestic partners down the road (and in the meantime, healthy eaters on their own).  “Listen boys”, I would say when they tried to weasel out of helping in the kitchen because they would rather play another game of Call of Duty, “The surest way to a girl’s heart is through her stomach. Did I ever tell you what dad made me the first time he invited me for dinner?”

It was a rhetorical question. Of course, they knew.

They grew up with stories of how their dad and I cemented our relationship through food—flipping through cookbooks, exploring the local market, and spending hours working side-by-side. Fettucine would start with flour and eggs; pumpkin pie required scooping flesh from the fruit. It was labour, but a labour of love.

When my sons finally left home, I became their virtual culinary cheerleader. I emailed recipes with helpful side notes; responded immediately to their texts seeking technical support (“Mom, what does it mean when they say to put the pan in a water bath?”) and cheerily helped them navigate the confusing aisles of the grocery store when they called me on their cell (“Why can’t I find the canned jalapenos in the vegetable section?”).

And now, they have not only stepped up to the (dinner) plate—as chefs, they are quickly leaving me in their wake. My eldest regularly texts me photos of his beautiful homemade bread. The last time he was home, he made a gigantic loaf of challah, expertly braided, peppered with poppy seeds, and glistening with egg wash. I wanted to cradle and sniff this beautiful and fragrant loaf as if it were a newborn. My youngest isn’t trailing too far behind. He makes a mean enchilada.

A number of months ago, my sons surprised my husband and me with a pasta maker. They recalled that we used to own one as university students.  “Now that we’re out of the house, we thought you’d enjoy reliving those old romantic days,” they said.

I didn’t have the heart to tell them that we still owned the pasta maker. It had been relegated to a far shelf in the back basement long ago. Our make-everything-from-scratch days had come to an abrupt halt when we traded our student lifestyle for busier careers and parenthood. We still ate very well, and family dinners were always a priority, but making fettuccine from scratch seemed like unnecessary work when we could buy good packaged pasta up the street.

So, when they next returned home, they were crestfallen to find their present hadn’t even made it out of its box. They had had visions of their parental units joyfully bonding over pasta-making, red wine in hand, stealing kisses in our empty nest. They clearly had put loving thought into their gift, wanting to buy us something special that showed how much they understood us. Instead, we had tossed it aside unceremoniously in the mudroom.

When we told our boys about the old pasta maker in the basement, they retrieved it and immediately put us to work in an assembly line of taggliatelle production. Perhaps subconsciously they equate the effort invested in food preparation with the overall health of their parents’ union. Is it any wonder? Sue Nador is a Toronto mother of two grown-and-flown sons, who make frequent return flights to the empty nest she shares with her husband of thirty years and their failure-to-launch canine daughter. She writes primarily about relationships in her middle-aged demographic on her blog, The Relationship Deal, Huffington Post, LiisBeth, eHarmony Canada, and other places.

Home / Articles / Young Adults / Adulting / I Taught My Sons to Cook, Here’s the Gift They Gave Me
FacebookPinTweetEmail