In a corner of my bookcase, I keep old reference materials that once meant something important. They include the Barron’s Profile of American Colleges which weighs five-and-a-half pounds. Still affixed to several of its 1600 pages are post-it flags representing a college choice for our son Sam, who was junior that year.

Hanging around in my writing room recently, Sam found the book and hoisted it. “God,” he said.”Remember this thing?”

There are some moments I recall in full only after they have passed. I realize now, it was the moment I placed that four-inch tome on the coffee table and said, “This will really be helpful,” that I saw Sam, for the first time, try to imagine himself gone.

Thus began the summer of I don’t know.

He had been class president for three years, and knew every one of his peers. He was a baseball stand-out in our small community, and mentored kids at our local Boys and Girls club. He didn’t just live for the moments, he tracked them down and hugged the life out of them. And he wanted to leave it all behind like he wanted to leap off a cliff. Or, move to a completely new place where he would not know, or be known by, anyone.

“Any early thoughts about where you want to go?” I asked him that summer.

Eventually, he threw out a few preferences, then changed his mind, as if a spoken thought might be binding.

In the spring of his junior year, he toured the south and fell in love with a private university that accepted him early decision. I stashed the Barron’s guide in the memory corner of my bookcase, took down the to-do lists, and ordered stickers for the car. He started wearing the sweatshirt, started talking about how “pumped” he was for college. It was over.

[More about how to help your teen through junior year of high school here.]

In a blink, the season of goodbye was upon us. Facebook feeds filled with pictures of kids in tuxes and gowns, and “Congratulations, Graduate!” balloons floated above the mailboxes where the seniors lived. Cars lined the streets where parties were being thrown and parents said “Already?” to each other instead of “Hi!” Affixed to our front door was a huge sign bearing the name of Sam’s baseball team and his number, 12.

Late that spring, he threw a shutout to bring home the state baseball title. I watched the crowd blow up, watched Sam leap from the pitcher’s mound, watched the team race across the field to swallow him. Photographers shot pictures of Sam’s coach raising him high in the air like a little boy. It was glorious. 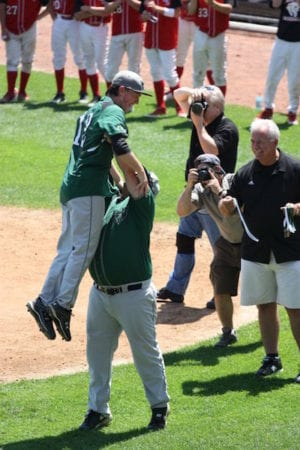 And here I’d been worried that he’d leave on a melancholy note when it was all over.

“So, people say I’ve just finished the best years of my life,” he told me. “That I’ll never be this young and free again.”

On the way to Logan Airport, he said little while he watched the homes and cars pass by outside his window. When the city skyline came into view, he sat up straight and looked ahead, his expression no longer pensive, but not familiar either.

There are some moments I recall in full only after they have passed.

I realize now, it was at that moment when the city was before us, that I saw Sam, for the first time, understand that he was not going, but gone. And I don’t know, but maybe, the unfamiliar look in the rearview mirror belonged to someone who was beginning to realize that “best years” might not lie behind, but ahead. He was ready.

[More about best advice for freshmen, from a college professor, here.]

Sam will graduate in a month. In the four years that have passed since that ride to Logan Airport, he has made the dean’s list and been elected president of the club baseball team. He has learned to cook and manage a budget. He has mentored children from the community, and he will leave school minus a favorite glove, his gift to a young baseball player in the Dominican Republic who played with bare hands.

It took the best of my own years as a college parent to discover that “I don’t know,” might sound like “I don’t care,” or “I’m not ready,” or, “I don’t want to know,” or other things that suggest our juniors aren’t grasping the importance of college decisions, or worse, are not ready to make them.

But people like Sam, who live where they are and not where they aren’t, love “I don’t know,” for the room it leaves to decide, to choose, to change one’s mind. For parents like me, it is when we step out of the space they need to grow that we eventually discover what “I don’t know” actually means which is, simply, “I don’t know – yet.”

And why did it take so long for me to get this?

The Perfect Letter (for Your College Freshman)

Going to College: Seven Big Talks to Have Before They Leave