Our firstborn wasn’t due until September 23, 2004, so panic set in when my wife’s water broke on the morning of August 2. As the ambulance pulled away for the ninety-minute drive to the closest hospital equipped for such premature births, I breathed deeply and got behind the wheel for what would feel like the longest drive of my life.

My thoughts raced from everything will be fine; she’s in good hands to this is not good — our baby’s lungs are not fully developed yet. I tried to distract myself with an audiobook, but after five minutes, I realized I didn’t remember a single thing I’d heard. I just kept breathing and reminding myself I needed to get there safely.

When I arrived, I learned that her labor was progressing quickly. There was no time for an epidural — the baby would arrive soon. I stood by my wife, my head spinning.

Throughout our pre-birth reading and training, it never once occurred to me that our child could be two months premature. I’d led a privileged life with little loss. This was a wake-up call: I was not immune to hardship.

Nathan arrived just before midnight. All four pounds six ounces of him. We heard no newborn wail, only the doctor’s and nurses’ shuffling feet as he was taken from our room, rushed to another floor, tucked inside an incubator where he would spend the first two weeks of his life.

We stayed in the delivery room, along with the now silent machines. None of the mother-crying while brushing back the few strands of hair from the newborn’s forehead, no father proudly gripping the tiny purple feet, no grandparent entourage replete with balloons and stuffed elephants.

A few minutes later, we received a report from the doctor: Nathan was stable, breathing with the help of a c-pap machine. The weeks that followed were an emotional rollercoaster. The nurses and doctors were confident that he would be “ok.” Those words of comfort were always followed by, “He’s not out of the woods yet.”

Some days, we could hold him for a short period, always with a nurse watching, never the way we imagined the first days with our baby. We learned not to rub our baby’s back, not to be afraid of the yellowish skin (jaundice) and discovered that breast milk is “liquid gold” for babies born too soon. In the back of my mind, I wondered how all this would impact his growth and development.

Soon, Nathan was breathing without the c-pap, and the doctors felt it was safe to transfer him to a hospital closer to home. He would stay there for another week before we finally loaded him into our car (using a car seat made especially for preemies) and took our baby home.

Family and friends were supportive, but some made comments that stopped me in my tracks. One of the teachers at my school said, “I’m so glad he’s doing well, but you realize that he is probably going to be behind as a learner. You should expect that he may need extra reading support.”

Friends warned us that our son would be delayed

Other well-intended warnings about delayed walking, motor skill issues, and respiratory concerns. My wife and I were so happy to have our baby home with us that we paid little attention to the worriers around us.

At eleven months, Nathan learned to walk and read books in early elementary school. He made friends easily, found joy in all things sports, and was a good student.

He didn’t like being alone, and though he could play independently, he preferred someone nearby. We attributed this to his premature birth, which could easily be his DNA. There were no noticeable, lingering effects from the trauma of his first few weeks.

Our son is now a rising high school senior

Now a rising senior, Nathan continues to do well in school and is on the varsity soccer team. We spent most of this summer visiting university campuses, and talking with coaches (he plans to continue playing soccer in college).

Sometimes, he asks questions about his first days: Was I that tiny? How long was it before I could breathe on my own? Were you scared? We answer these as honestly as we can, though, to be honest, much of that time was a blur for me.

We chose not to listen to the worriers

We could have listened to all the worriers who told us to brace for the worst. We could have assumed he’d need extra support in school and require physical assistance when learning to walk. I have wondered how this deficit mindset might have affected Nathan’s development. But we chose to watch him grow at his own pace and celebrate every milestone, no matter when it occurred.

The next big turning point will happen after this school year. Our little four-pound six-ounce baby, who required assistance to breathe and a team of nurses and doctors to help him thrive, will be setting out all by himself.

When I asked how he felt about being alone next fall, he ate a bowl of cereal yesterday morning. He smiled and, with all the confidence of a self-assured young man, said, “Don’t worry, Dad. I’m ready.” 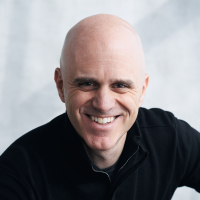