When my first baby went away to college, I bought All. The. Things. Armed with my credit card, an emotional bank account overflowing with pride and anxiety, and a dorm supply list a mile long, I loaded up both virtual and real shopping carts, then filled my car to the brim with All. The.Things. and off we went. #collegeorbust

Then his freshman year went by in two blinks, and back I happily headed to his dorm to pick him up,  and also grab All. The. Things. #babycominghome

However, when I walked into his dorm room on move-out day I was woefully unprepared for All. The. Things to have somehow doubled in quantity, and at the same time completely diminished in quality. In other words, it seemed he suddenly had a lot of stuff, and it was right then and there that I realized a dirty little secret that all college parents before me had neglected to let me in on, and it’s this- once you have a kid in college, your entire existence becomes that of a sherpa.

Parents Help Their Kids Move Into College and Out and In….

Still confused? YOU WILL BE MOVING THEIR CRAP FROM ONE PLACE TO THE NEXT UNTIL THEY GRADUATE! (And then, probably after that a few more times just for good measure because why not? At that point you’ll be a pro at it!) #allthethingsbecomeallthecrap

Thus began my (and my husband’s, because he drove the moving *truck*) new journey as official unofficial SHERPAS to our college children. And from that freshman year on, I can safely now state that All. The. Things. basically turned into All. The. Places., and up, down, over, under, here, there, on a boat, in a house, on a train, up the stairs, down the stairs, across the quad……I will not eat green eggs and ham, errrr, I mean I WILL NOT MOVE ANOTHER SET OF PLASTIC DRAWERS, PLEASE MAKE IT STOP!!! #somanyboxesandbins

In all seriousness (and really, when you’re going through the continual and endless transition of moving your kid’s belongings from one location to another for four years straight, do not actually take it seriously or it won’t end well) moving the possessions your college kids collect is a thankless job, but nonetheless one that comes with the job so to speak, so you may as well settle in and buy a furniture dolly.

You are not only a parent of a college kid, you’ve also unbeknownst to you, voluntarily entered a moving company apprenticeship. Welcome moms and dads! Stock up on back pain meds and packing tape! #sherpasunite

Anyway, after a few frustrating bouts of bursting into tears (mine, not his) we got my first baby, and All. The. Things. (including several boxes of new things he’d acquired- he’s into vinyl records now?) all packed and moved back home. Then I exhaled for what seemed like maybe five minutes, and we moved it all back into his summer dorm, because he was starting a job as a resident assistant.

In the three years following, he has lived in SIX DIFFERENT DORM ROOMS, and I’ve also moved my second son to college, and then both home for summers. And now all of us and All. The. Things. that two boys going to college require are getting ready to move BACK FOR THE FALL SEMESTER. #movingmarathons

Last week as I sat and watched my little adventurers (that’s what I call them now because obviously it goes better with my new title as “head sherpa”) stack boxes, baskets, and bags of stuff into my dining room, ready to be heaved onto my back and transported back to campus, I had a brief mental meltdown, and found myself silently calculating what an Uber would cost to take them and their stuff back to school.

Then for a brief moment, I fantasized about how one day soon (but not that soon because I still have two more kids at home) I would no longer be forced to spend part of August sweating, swearing, and shlepping to and fro.

Gratefully I snapped back to reality and realized these moments, these stressful snippets of lost patience, annoyed tempers, aching backs, and trashed car trunks, would one day be a memory as distant (and yet fondly frustrating) as potty training. And maybe, just maybe, one day August will roll around and I will find myself with nobody and nothing to take anywhere, and in the same way I now wax nostalgia about the terrible twos, I’ll probably confess to missing shopping, packing, hauling, and moving All. The. Things.

So while it feels very much like a burden right now (and I’ve got some wicked packing tape rash to prove it), I am after all as we all like to say, truly #blessed #passtheTylenol

Grown and Flown the book: Available for pre-order with gift (ends Sept 3.) 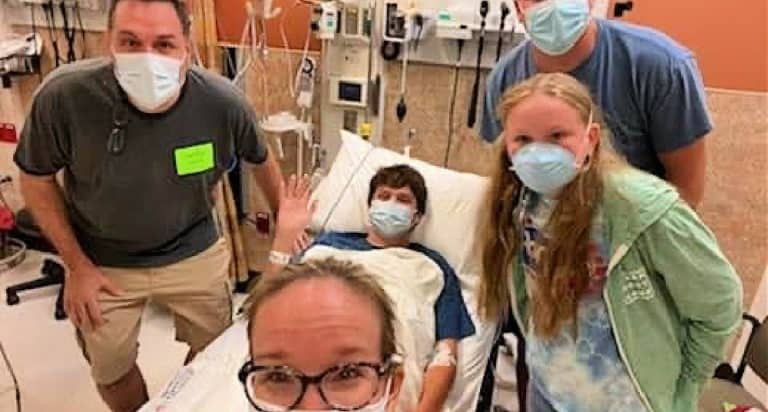 I imagined college drop-off I but exactly zero of my imaginary versions took place in a hospital.