We are a society that is sports and competition driven, and this is hurting our children – both to those who play sports and the ones who don’t. I came face to face with this problem when running the Travel soccer program in our town. I received email after email about how the judges who placed the players on the A, B or C team had gotten it wrong. Nope. They always got it right – it was the parents who got it wrong.

As a coach, I also heard what not to say to an athlete. The other coach, also a parent, had called one of my nine-year-old girls a monster because she was big and fast, and he went on to antagonize me the entire game. I wrote a letter, complained and received a formal apology.

I had parents let me know how I should have coached better. I always offered them the email link so they too, could volunteer their time.

It happens. We open our mouths and insert our feet. We mean well, but there are just so many things that we, as parents do not need to say to our high school athletes. We can unknowingly ruin their high school athletic experience. They know more than we think they do. There is only one thing that should ever be said to your athlete. I will save this for the end (don’t peek, even if you want to).

First, let’s talk about what not to say.

The first thing not to do is critique your child’s play. Not only does he already know what he did or didn’t do in the game. He has a coach for this very reason. Very often, what an athlete knows, does not always translate to the field. Trust me, your opinion does not help.

Do not talk about other student athletes with your athlete. He may want to vent about how he should have played more than the next player. That is fine.

Do not jump on the bandwagon or instigate the conversation. You were not playing. Just listen.

Do not compare other players playing time to your athlete’s. Whether you agree with it or not, your coach has a game plan – who he plays and for how long. Maybe you agree, maybe you don’t. But it is the choice of the coach. Many things determine playing time. Sometimes the coach gets it right, other times, she does not. If your athlete brings it up with you, encourage her to talk it over with the coach, and continue playing her best.

Do not make it all about the wins. Do not make it all about the losses. I know it’s rough. We all get caught up in the heat of the moment. But high school sports is meant to be a great way for your teen to become involved, promote sportsmanship, work hard, improve, learn about team work and simply a way to support her school. No matter how much we think it matters, in the end, it is just a game.

Do not tell your athlete she is not a part of the team, if she is sitting the bench more than she wants. Encourage her to be the best teammate she can. To work hard and earn her spot, or not. But there are lessons in everything. Sometimes, we learn more from watching, than from doing.

Do not tell your athlete she is better than she is. Take off your rose colored glasses. Objectivity is a rare commodity when it comes to our athletes. C team players do not belong on A teams. It is not good for her self esteem or the other players to force your athlete where she does not belong. When it comes to high school sports, not everyone starts, but hopefully everyone finishes.

Do not talk badly about the coach. Yes, there are bad coaches who favor players, just as their are bad bosses who favor employees. It is a part of life, and if it happens to your athlete, she is better prepared for when she comes across this in life. If she comes to you about something that does not seem fair, talk it out with her, help her to see the big picture.

Do not tell your athlete how he is feeling after a game. Maybe he does not care if he lost. Maybe he is very excited that he won. Maybe he just wants to go home and watch Netflix or is more concerned about that cute new girl sitting next to him in Chemistry. Separate out your feelings and let your high school athlete be in charge of how he feels.

Do not get all serious on your athlete. Put high school sports into perspective. My daughter, who was in the middle of a particularly tough season, texted me that she had scored a goal. I responded, “How did you do that from the bench?” We both had a laugh, and it brought some lightness to a tough situation for her.

Do not speak up for your athlete. If she has a problem with the coach or another player, encourage her to speak up on her own. High school is the time for kids to learn how to deal with adversity. Guide them, teach them, encourage them, but stop doing it for them.

When it’s over, do not continue talking about the game, unless your athlete brings it up with you. Chances are, he has long forgotten about it. He has received about a hundred text messages and has been scrolling on Instagram while all the bad calls by the ref are still mulling around in your head. Idina Menzel sang it best. The minute the last whistle blows, “Let it go, let it go….”

If you got caught up in the moment and got in a fight with another parent or the ref, do not discuss this with your child unless you are going to apologize. We all have gotten caught up in a heated game, a nail biter, and maybe we said something we should not have. If you had screamed at the ref, “You stupid moron, when are you going to get glasses,” chances are, your athlete heard and is embarrassed enough. We all make mistakes, and apologies go a long way.

When the last whistle blows, we as parents need to remember, we are not the ones playing. It is not our game. Our time has passed. Becoming over involved, uttering something less than positive, wanting our athletes to succeed beyond our own successes and failures, is just not good parenting. I know. I have done this. And then, during of my teen’s very heated club soccer season, I read an article that changed everything. Written by a coach, he gave brilliant advice. He had said that there is one thing, and one thing only, that you should say to your athlete – whether it is club, high school or college sports. When the game ends, look your child in the eye, smile, and say, “I really enjoyed watching you play.” 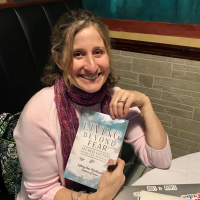 I cherish my husband, our three children, and dog, Bella. Crafting stories and heartfelt writing is my passion, as is having daily, full body fits of laughter. You can follow my inspirational blog, Alternative Perspective, at Bethmund.me and am excited about the publication of my co-authored book, Living without Fear.