For decades now we have, at the very least, been paying lip service to the notion that our girls need to be empowered to shatter the glass ceiling. At least part of that message seems to be getting through. But as they say, the more things change, the more they stay the same. An article recently published in The New York Times, Many Ways to Be a Girl, but One Way to Be a Boy: The New Gender Rules, examined the results of a survey done by Plan International called The State of Gender Equality for U.S. Adolescents.

In the national survey conducted by PerryUndem, 1,000 kids and teens ages 10-19 were asked questions that revealed gender attitudes in this often overlooked population. In overwhelming numbers (92%) adolescents say that they believe in gender equality but exactly how that equality manifests itself is still something of a mystery.

How teens feel about gender equality

In unsurprising fashion, the poll indicated that boys feel they are expected to be tough and athletic. And while girls feel empowered, most still feel unsafe and like sex objects. These don’t seem like new gender rules, rather a need for new gender roles.

Our girls, especially our tweens and teenagers feel allowed, even obligated, to be smart, to be leaders, and to break the glass ceiling. The pressure to do all the things that have always been expected of boys comes from a wonderful, newfound sense of well-deserved entitlement that is mixed with the skewed sense to also look pretty while marching toward gender equality.

According to the article, “Girls were as likely as boys to say math or science was their favorite subject, and to have considered running for office. They said they were mostly treated fairly compared with boys.” Yet 75% of girls 14-19 said they felt judged on their physical looks and say that society considers appearance as a female’s most important trait.

In terms of our girls’ education and smarts, tough and tenacious qualities are encouraged and rewarded. Girls, however did not feel equal when it came to their bodies. “About half said they hear boys making sexual comments or jokes about girls daily, including a quarter of girls 10 to 13.

One-third of teenage girls have heard these comments from men in their families.” It’s no wonder then that the girls in the survey said they felt “judged as a sexual object or unsafe.” Go ahead and do well, they are told but do well while being a sex object.

This is disappointing, even heartbreaking, but again, not surprising. When it comes to our boys, they are expected to maintain the heteronormative stereotype that includes strength, roughness, and domination.

Athleticism, bravery, and intimidation are expected in our boys as much as the perfect body, look, and style are expected in our girls. And our boys know it. Three quarters of the boys in the survey indicated that they felt pressure to be physically strong. They also reported that when they were angry they were “supposed to be aggressive or be quiet and suck it up.”

Boys are taught to stuff down their emotions. Anger and violence are common and considered normal, but crying and talking about their feelings are seen as weakness. We need to raise boys who are emotionally intelligent, not just intellectual. It’s hard to do this though when half of the boys in the poll indicated men in their family make sexual jokes about women and feel pressure to do the same.

Eighty two percent were criticized for “acting like a girl.” Boys don’t feel like they can cry or deviate from society’s gender roles, and that needs to change because it isn’t just hurting our girls, it’s hurting our boys too.

Boys are challenging each other, shaming their male peers as a way to not be the target of the exact behavior they fear if they reveal softness or sensitivity or anything resembling feminine characteristics.

Girls are given more freedom to express themselves in what many consider masculine ways, but boys are called homophobic slurs or derogatory words used to put down both women and gender-nonconforming males.

The survey reported that 81% of girls 14-19 had been propositioned for a sexy photo Boys ask for sexts, naked pictures, and sex from girls and when they don’t get it, they lash out. And one girl reported that when she rejected a boy he became very mad and called her names.

We, as parents and society, need to do better. Our girls really can’t be anything they want if the prerequisite is meeting unrealistic expectations of beauty. And our boys do have many ways to be a boy. But those ways need to be encouraged from an early age and supported as they grow.

Girls feeling equal to their male peers in terms of opportunities did not come without suffering. Boys and the men in their lives need to embrace the challenge of breaking male stereotypes. If girls can break away from dated roles, so can our boys. Boys and men can redefine the rules of strength by leaning into vulnerability rather than fighting it.

Here are 7 Ways to Support Your Bisexual or Gay Teen 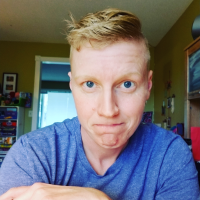 Amber Leventry is a queer, non-binary writer and advocate. Their writing appears on The Next Family, Sammiches & Psych Meds, Babble, Ravishly, Scary Mommy, Longreads, and The Washington Post. They also run Family Rhetoric by Amber Leventry, a Facebook page devoted to advocating for LGBTQ families one story at a time. Follow them on Twitter and Instagram.