The other day, as my younger son and I exchanged places in the car so that he could drive home from school – our daily ritual in the run-up to getting his license, he said to me, “Oh and mom, I have an extracurricular for my college applications.”

“Great!” I responded. “What is it?” I wondered if he had decided to join the school newspaper, or perhaps the community service club, or maybe Model U.N.

I couldn’t have been happier. But flash back four years to when my first son was a junior in high school, even two to when my daughter was beginning to shape herself as an applicant, and I think I would have felt differently.

Really? You don’t want to try Habitat for Humanity? Or student government? The science club?

One delight of having kids is watching them grow into themselves

One of the delights of having children is seeing them grow older and watching them take on identities separate from us. What family traits will manifest themselves in the kids? How will they surprise us? Which seeds planted so carefully along the way, will take root? Do they have a particular ability? Is it one we share? Look out world!

But one of the concurrent questions, especially as they prepare for college, is have we done enough? Have we exposed them to the right things, given them good lessons? Have we pushed them too hard, or relented too easily? Are they compassionate; are they talented; tenacious; will others value their qualities? Be nice world!

When my kids began kindergarten, the school asked us to write an essay about each of them. Describe your child. “He’s curious and careful,” I wrote about my oldest. “She’s sunny and active,” I observed about my daughter. “He loves animals,” I told them about my youngest. Although their personalities were each unique, we did not yet know where their interests and abilities would take them.

And we didn’t realize how soon it would be their turn to write the essay. In twelve short years they would not only learn reading, writing, and arithmetic but pursue a plethora of activities: piano lessons and soccer; lacrosse and drawing; swimming and acting.

They would build skills in some, abandon others. We guided them in certain directions, they pulled us in different ones.

Some kids find something early – A gift or a passion propels them forward and they work very hard at it. But for others, it may be more difficult to find that zeal.

And it seems ok to keep looking, to try anything and everything; they’re young after all. It can also be a luxury, with many activities costing time and money, when both are often too short.

But then it’s time to apply for college. It’s suddenly too late when it still felt like there was all the time in the world to explore, to excel. Life can seem unfairly front loaded, especially for late bloomers.

Over the years, I’ve heard differing opinions on the weight that an extracurricular activity carries for college applicants. Counselors and columns have advised that it all really comes down to grades and test scores.

Others have extolled the importance of the college essay, out-of-school time, the “whole” applicant.

We’ve read about the straight-A perfect-SAT kid who didn’t get into an Ivy because he didn’t also play an instrument. Or conversely the athlete recruited to the premiere state university as a sophomore because she was a star.

Those kids are the exception. But what about the rest – competent, diligent, dedicated, but not off-the-charts? What about the kids working hard just to be good students, or without the time and resources to develop skills beyond the core curriculum, kids who are doing their best to keep up – average kids? How do they make a sale, package themselves up to be bright and shiny and acceptable?

As I approach round three of the college application process with my son, I feel the familiar anxieties tugging at me again. But then I remember that I’ve been here twice, and it’s worked out.

My two older kids were able to tell their stories, to find schools that have thus far been happy places for them. My wonderful third child will also find a school that is right for him. And if it isn’t, he will find a different one. I also remind myself that it is not about me. This is my child-becoming-an-adult’s journey.

[Related: College admissions IS harder than it used to be: 11 reasons why.]

My son has chosen as one of his favorite pastimes, fishing. For years, whenever he’s been able to, he’s found a body of water in which to fish. Always a child who needed quiet time, he’s been self-aware enough to seek it. 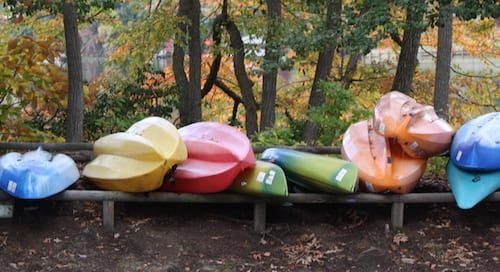 Often his dad has been by his side, quietly coaching — not a ball game — but casting, retrieving, water safety. They’ve floated together for hours, guiding and guided by each other. Precious time.

Let them choose activities that they enjoy, not resume boosters

But I do hope he’ll apply some of what he’s learned as a fisherman to this process (and that we will too):

• Read the water; understand the environment you’re entering
• Be properly equipped and prepared with the correct gear and bait
• Remain optimistic, organized, and versatile
• Enjoy the process – celebrate successes while learning from failures (It’s not called “catching” after all)
• Remember that there are many fish in the sea! Christine Kouwenhoven lives in Baltimore, Maryland with her husband and three children (mostly grown, two flown). She works as the Communications Director at Baltimore School for the Arts. Christine has an MA from The Writing Seminars at Johns Hopkins University. She shares poems and reflections regularly on her blog poem post. Photo credit: Kitty Kouwenhoven

It’s graduation season, and we’re here to provide you with a bit of diversion — our high school graduation gifts for her. We hope you’ll find inspiration in this list of best graduation gifts for young women with a mix of traditional and trendy. Are you looking for other grad gift guides? Note: We are…