My daughter and I spend an awful lot of time communicating through text these days. It’s gotten increasingly difficult for her to communicate with me about thoughts and feelings and her life since she’s entered the high school years, and texting works like a charm.

I mean, it’s not ideal, I’d rather talk face to face but I will take what I can get to keep a foot into her private life. Besides, I’m well aware (after going through these years once before with my oldest), that if I tell her I don’t want to text about things such as her period, boyfriends, and if she’s feeling sad but doesn’t know why, I’ll be blocking the opportunity to get to know my daughter as she grows into a young adult. 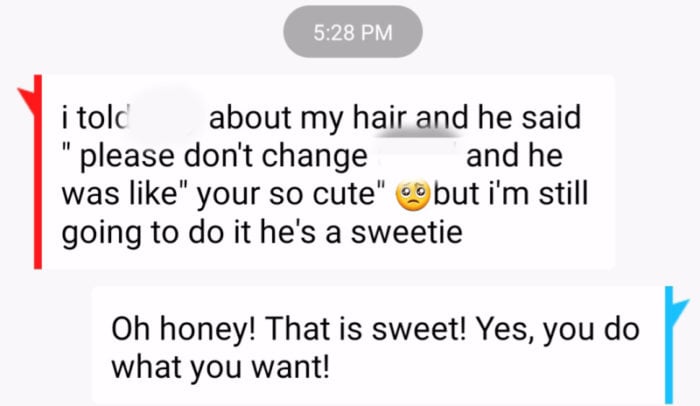 I never want her to feel shame around communicating this way because I know this is what works for her right now. We can get to more face to face talks later in life.

Lately, we’ve been going back and forth about coloring her hair–she has long, dark locks and she wants them to be pink. Now, I am not a stylist but I do know in order for her hair to hold the pink color, it has to be bleached first, then have the color applied. I told her I am not capable of doing such a job myself and I would probably turn her hair orange or yellow by accident.

She has sporadic babysitting jobs and saving the $200 to have it done at the salon feels like torture to her so, for the past week we’ve had a lot of talks about patience, saving money, the value of waiting a bit to get what you want, and how I’d love to help her out but I have a feeling she’d never forgive me if I fried her hair off.

The other day after dropping her off at her father’s house, I saw her name pop up on my phone and I thought, Here we go again, let’s talk about the hair some more. Be patient with her, Mama, you were a teenager once too who was impulsive and wanted everything that very second.

But to my surprise, it was a different kind of text (still about the damn hair), but it made me drop my phone on the kitchen island and give the air a few fist pumps because as frustrated as I’ve been with my daughter lately, I am doing something right; we are doing something right.

She was texting me to let me know her boyfriend said, “Please don’t change your hair. It is perfect the way it is and I love it.” Then she followed it up by saying, “He’s so sweet, but I’m still doing it.”

Here is What I Love About My Daughter’s Decision

My daughter is realizing she is an autonomous young woman.

My daughter is going to do what she wants even though a boy she likes very much asked her not to do it.

My daughter is putting her opinions, values, and wants before someone who is probably number one in her life right now.

My daughter wants to do something to her body, and she isn’t letting anyone stand in her way.

Her stubbornness is paying off and I can sit here and tell you she’s been driving me bonkers these past few weeks with the damn pink hair.

And I can also sit here and tell you her persistence is something I love about her and I hope to God she never softens.

I hope she will always realize if she wants something, whether it’s a hair style, a job, or to end a relationship that just isn’t working anymore, she channels this feeling she has right this very second about getting her hair the way she wants it come hell or high water.

I hope she never lets anyone slow her down or speed her up when it comes to something she is working towards.

I hope she always sets her own pace and isn’t afraid to say “yes” or “no” at any given moment in order to stay true to herself.

It was one of the best texts I’ve received from her, and oh boy, we’ve exchanged a lot.

Having our children stay true to themselves and resist the influence of outside factors is so rewarding. I am so happy that my daughter isn’t compromising what she really wants in order to make others happy. This is the age when it starts–where our sons and daughters begin to put their lovers and friend’s opinions before their own. We’ve all had a taste of it– it’s called losing ourselves and there isn’t a person alive who hasn’t at some point sublimated what they wanted to what someone else wants.

That day, I was reminded that my daughter has been hearing my message, she is capable of making her own decisions. And as far as a man ever trying to change her? Yeah, it’s not going to happen.

I Can’t Imagine NOT Having Children In My Life