We anchored our boat on a sandbar, about a half mile from shore. After playing in the water for some time with the twins, my oldest and I decided to swim to shore. Our goal was to see if it was sand all the way, or if it got rocky at some point. The beach looked gorgeous and we wanted to play.

We left the twins with their dad and my son’s girlfriend. While we swam, we talked. He’s twenty, so I can talk to him like an adult now. And he responds with a wisdom well beyond his years. And today he told me that I needed to let his brother make his own mistakes.

See, his 17-year-old brother just bought a snowmobile and I was concerned. He is approaching his senior year in high school and he just got his first ‘real’ job this summer, working for a local farmer. He has been working more than 40 hours a week, “making bank,” as he likes to say. But before that, he made peanuts, working for a local tubing rental.

My 17-year-old likes to spend money. Immediately. And that’s what he did. As soon as he earned the money, he spent it. Yes, it was on something he always wanted. And yes, I knew he would definitely put it to good use. But he does not work during the winter and he drives a gas-guzzling Dodge pick-up. I am concerned because I can’t afford to put gas in his pick-up, and after spending all of his money, neither can he.

We are a family of eight. I have six boys. And although my oldest is 20 and now out of the house, it is still hard to raise our family solely on my husband’s income. So naturally I was concerned when my son blew through his savings after only a week of earning the money. He has three sports seasons to get through, numerous trips back and forth to school, dates out with his girlfriend, and all of the extras that he will require throughout the school year. These are all things we struggle to cover for him.

And these are all things we were hoping that he would take on himself this year. Our oldest son funded his own activities and needs in his senior year of high school. We paid for very little. Yes, we covered his necessities, such as his cell phone bill and insurance. But he bought his own car, put his own gas in it, made his own repairs, and covered any of his extra-curricular expenses, including sports and dates. We’d like our 17-year-old to follow suit. My husband told him that he needed to squirrel away at least $500 for the school year. After buying the snowmobile, he no longer has it.

And while I shared these concerns with my oldest, he had no sympathy for his brother. Or for me. “Mom,” he said, “It’s time you let him make his own mistakes.” He, of course, is right.

His little brother will be on his own in just one short year. And he is far from having the skills necessary to make it. How is he going to learn how to survive if we keep bailing him out?He won’t. And we will be setting him up for failure.

Sure, he might manage to pull it off, and in the last couple of weeks before school starts, he may just be able to stash away 500 bucks to get through the year. That’ll buy him a few tanks of gas, at least, and maybe a couple of dates with his sweetheart.

But if he comes up short, we will have to resist the urge to help. He’ll need to ride the bus. Or climb on top of his brand new snowmobile. When he has no money for his girlfriend’s Christmas gift, he might have to get creative, and make her something. He’ll be packing more lunches for his away games and stopping at Mc Donald’s less.

Because if we help him, we will have just taught him that it is okay to be frivolous with your money. If we help him, he will only learn that someone will bail him out somewhere along the way. And if we help him now, when he hits that door running next fall, he won’t even have the gas to make it down the road!

He will lack the ability to plan ahead, and to save money. He will spend everything he gets immediately after he earned it, and come up short for his food or rent. And while this may be no big deal for other kids his age, it has to be for us. And it has to be for him. Because we can’t afford to support two households.

And as I thought about all of this, I knew, in my heart, that it is the right approach to take. The hardest, for sure, because we all want to help our kids out and give them the world. The loving, motherly thing to do would be to give him gas money when he can’t afford to head to town this winter. But it would also be the most destructive thing to do.

Isn’t it better to give him the skills to live in the world he already has, rather than to shelter him and hope to make his world rosier?

And aren’t these last few years of high school when you need to be concentrating on teaching those skills? Shouldn’t I be teaching him everything he needs to know to “make it” when he leaves our nest? While we still have him here?

And what better place for him to make those mistakes, than at home? If I let him make those mistakes now, while he has me around to support him and to help him deal with the aftermath of those bad decisions, won’t he learn so much more? And come out standing, ready to tackle whatever life dishes out at him?

Here, if he spends all of his money and is broke this winter, he at least has a place to live, to sleep, and food in his tummy. He still has transportation, even if it’s not his preferred mode of transportation. And he will still be taken care of. Broke, but cared for.

If he falls flat on his face out there, he will be homeless. He will be hungry. And he will be walking everywhere he needs to get to. His consequences for his choices will be much more devastating than they would be at home. So while I wanted to shield him from the consequences of his actions, my oldest son showed me a better way to help. “Let him face it mom. Let him be broke. And don’t bail him out.”

And by doing so, I will be giving him more than just a tank of gas. We reached the beach. It was sandy the whole way there.

Not a rock in site. 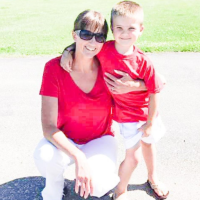 Although our teens play Fortnite and stare at their phones like it is their J-O-B, alas it is not.  There is no denying that getting our offspring off the couch and onto a productive path can prove difficult in these teen years. However, there are opportunities for employment for kids seeking a summer job if…