It started yesterday with a post on the Grown and Flown Parents group by a mom, Sarah Breheny Fedorko, who was desperate to help her son:

Does anyone have someone in Geneva, Switzerland? My son landed there within the last 12 hours, and was taken by ambulance to the hospital within hours of arriving…He landed today for a study abroad that was starting in March. He was planning on just traveling until March. He had a seizure and was taken to the hospital before he even got his European SIM card to put into his phone. He is still in the hospital tired and just a little disoriented, hungry, thirsty…

Almost five hundred people left comments which were overwhelmingly thoughts and prayers from fellow moms who deeply felt and clearly understood this mom’s anguish. There were helpful suggestions to post in other groups, calls to contact the US embassy, assurances that Switzerland had top notch medical care and several people who offered to reach out to friends they knew who were living in Switzerland.

Then another mom on the site responded with,

Turns out I have a friend there right now that is offering to help. It is 11pm there…I will private message you both now to make a connection….!

The group breathed a collective sigh as it seemed like a connection had been made.

The next day, a grateful Sarah updated the group,

I am humbled and grateful beyond words, truly. I have had a plethora of people reach out to me and the night grew later and later. At 2:00 AM they released him from the hospital. A saint, a mother on this site, drove thirty minutes to pick him up at 2:30 AM, and safely deliver him to his bed.

I am normally a woman who cannot be rattled, but I am in tears. A mother across the world took care of him (my son) for me. She put her eyes on him and assured me he was okay. We will see what happens tomorrow, but tonight he is safely in bed. Tomorrow he was supposed to start traveling through Europe for 8 weeks before classes start…he will be resting for a few days.

Thank you to the hundreds, literally hundreds of moms who have reached out to me on Grown and Flown. You have no idea how much it helped. I am always available, always, if you have a child in need in St. Louis.

When I contacted Sarah to ask her if it was okay for me to share her story publicly, she replied,

Absolutely, I am still crying. A mother who knows nothing about me or my son stayed up waiting for  my text. She drove thirty minutes to make it all okay, to make sure that a tired, rattled kid who just landed in her country was safe and that his mother could know if he really was okay.

It is easy to focus on the bad in the world-those are the stories that most commonly make the nightly news. But it’s nice to hear about a moment when almost 500 moms rallied around another mom, without regard to anything except the fact that she had a kid who needed help. In that moment, we were all her.

In fact, it’s not just nice to hear about parents supporting other parents, it’s a veritable balm to the soul. Please join our Grown and Flown Parents Facebook Group to be part of this community of caring parents.

Sarah Fedorko messaged Grown and Flown after this piece went up to say that,

I never dreamed my simple desperate request would bring such a tremendous outpouring of love and support from across the world. I was connected to everyone from a pastor in Geneva, to a dad of four (David Joyal) who was ready to jump in a cab at 11:00 PM, and drive an hour to get to my son, to Victoria Botvin who stayed up talking to me and even offered help the next day. In the end, it was 2:00 AM, and Christine Kasper was waiting at the other end for my text to go pick up my son.

I am eternally grateful!

The end result of this is what has turned out to be most important. Perhaps none of us truly knew how deeply and collectively we care for any child, even when they are not ours, and even when they are across the world. In a world and time where we often feel alone and disconnected, I, and many others here, suddenly found a place where we were connected so powerfully, even with just a photo and a name, that we could, and would call on anyone here to pick up our child in the middle of the night, on a different continent, and take them to their bed.

Vincent recovered very well with lots of rest, although I am still worried because he discovered a large bump on his head the next day. He doesn’t recall them checking his head at the hospital. Today he starts his travels. He changed the original direction of his journey, and got on a train bound for Paris. It was easier to get to than Cinque Terre, and will allow him to get a regular sleep schedule for a few days. In short, Vincent is not just any 21 year old young man. Vincent was born on the autistic spectrum. He has struggled through tutors and therapies all his young life. He is a rising senior in college, the student manager in his university’s office of admissions, president of two clubs, ambassador to the office of the university chancellor, has been active as intern in two non-profits, and holds a 4.0. He has worked all his teen life to pay for college, due to the fact that my husband and I have two small developing businesses. He has what many would call grit. He has had to work for every little thing in his life, and it is that “grit” that will get him through every obstacle and barrier he encounters, before he returns to Geneva for his full time studies in March.

The response to my simple moment of need still brings me to tears. If there is no one else in the world we feel we can turn to…I think we all now know we can turn to each other here. I most humbly thank you for your support and concern for Vincent, and more importantly for reaching out in such great strength, that all of us now realize we have a group, a massive group, that genuinely cares and will do anything in their power to help our children, wherever they may be.

And we can all agree that the real super hero in this tale is Christine Kaspar, who brought Vincent where he needed to be. Christine contracted me to say she was happy to be in the right place at the right time and,

(It’s) so awesome to know that the connection G&F provided between me and Sarah has inspired so many people!! I did not expect that helping one mom’s son would start such a wave of compassion. I just knew I would be so grateful if my own son was in that situation and needed a helping hand.

Christine is an ex-pat who has lived in Switzerland for 30 years. She has two kids at university in the UK. And she said she’s “Amazed to be part of the leading feel-good story of 2020!”

The Grown and Flown book is available now – perfect for parents of teens and college students. 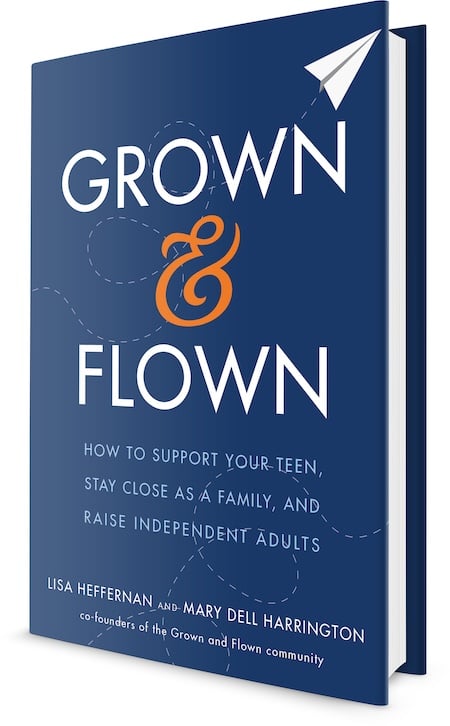 When Her Son Got Hurt in Alaska, Here is the Mom Who Helped

Home / Articles / Parenting / Friendships / A Young Man Was Abroad and In Trouble, Mom Turned to Grown and Flown for Help
FacebookPinTweetEmail

I talked to my best friend last week for almost three hours. We haven’t spoken since before Christmas. Of course, this was not by choice but we know how this works–talks have to be scheduled since we are both busy moms in our 40s who are trying to fit it all in and get some…

A few weeks ago I stumbled upon a tweet in my feed. I was connected to this Twitter member only through retweets and likes. As is the way with much of social media, if others had not reacted to the post, I mostly likely would never have seen it.  But I did. And once I…

My Best Friend’s Father Just Died: How We Share Memories of Our Parents

As a writer, words are my livelihood; they’re also my ammunition, my comfort, my means of making sense of senseless things. If I can sum up a complex concept succinctly, whittle out a poignant metaphor, tie up a chapter with a big, beautiful bow, I’m doing my job. But a few days ago, when my… I know we all have our own struggles as we try and get through this new life of sheltering in place in order to save lives. There are empty-nesters who can’t even see their kids right now, and are incredibly lonely. There are single mothers who are trying to work from home and provide support… We went there. We asked perhaps the most painful question. What do you miss? After weeks confined at home, with perhaps weeks or months still ahead of us, what are you missing from your life? We heard some answers, and then we heard the truth. We miss the life we had before We are sad…