I perch on the edge of my son’s bed and survey the chaos. There are clothes strewn over every inch of the floor. If I didn’t know better, I’d think that he’d just dumped out each drawer of his dresser. Actually – judging by the contents and placement of the piles, that’s exactly what he’s done. Is it possible that a child who is genetically related to me could interpret this as compliance with my request that he help me pack for his summer vacation? He’s leaving in 48 hours. I take a deep breath, stifle a scream, and regroup. My son went to sleep-away camp for the first time when he was nine years old. It seemed a little young, but a bunch of boys from his crew were going, and he very much wanted to be with them. I packed him up with a self-imposed nonchalance. I refused to join the ranks of mothers who made packing their raison d’être for weeks, if not months, before the trunk pick-up. I sent him with t-shirts that were a little the worse for wear, writing his name with a black sharpie and blatantly ignoring that you could read it – backwards — just below his hairline. If he didn’t have something on the camp’s suggested list – what nine year old owns a raincoat? – I sent him without it, hoping for sunshine. I was relaxed to the point of neglectful, assuming that my laid back attitude would pass seamlessly to him.

[Read Next: A Letter To Our Son: My Love Goes With You Always]

He lasted 10 days at camp – okay, 9. We drove to Pennsylvania to do an intervention. We coaxed and cajoled and gently ribbed him, but when nothing worked, we threw his stuff back in his trunk and rescued him. Never has a child (of mine) looked so happy to return to the bosom of his family.

The next year when he asked to go to sleep-away again, I agreed without a moment’s hesitation. Did I think he had matured? Sure, but really my husband and I had fantasized about a child-free summer for years. This time, we insisted he go to the same camp as his older sister – if he had issues, she’d be the first line of defense.

That summer, I took a different approach to packing, on the theory that perhaps the moms I’d so cruelly lampooned – if only in my head – were on to something. Maybe a perfectly packed trunk ensured a perfectly well-adjusted child. I traded in my black sharpie for washing-machine safe stickers bearing his name in manly colors like red, forest green, and navy. I separated socks, underwear, pajamas, and Shabbat clothes and packed them in zippered net bags. I rolled 15 identical Mets t-shirts and stuffed shoes into zippered pockets. And anchoring the trunk, situated snugly at its base, the large plastic box purchased lovingly at the Container Store, filled with every kosher snack known to man. Including a dozen imitation chicken flavored instant (low sodium) soups with plastic spork for nighttime dining in the bunk.

“Don’t they feed him at this camp?” my husband naively asked. I didn’t even grace his question with an answer.

And it worked. My son was a model camper from age ten on – he loved every minute – and in my magical thinking, it was because I’d mastered the packing process. This went on for five more summers, my not-so-latent control freak honing my packing skills until I could do it in my sleep.

Until now. He’s 16, and aged out of his beloved sleep-away camp in the Poconos. He’s leaving on a five-week teen tour to Israel. He must fit his belongings into a small rolling duffle that he can maneuver himself all over the country. Although he’ll go with many of these same camp friends, he must be self-reliant in a way that’s different from before. And I’m having a meltdown.
Some things haven’t changed. The other moms have elevated packing to the level of an Olympic sport. The latest “must have” is something called “Dude Wipes,” which can be purchased on Amazon, and strikingly resemble the wet wipes we used on these boys’ bottoms when we changed their diapers. Now they are the only thing for wiping sweaty faces on long hikes, at three times the price. And in addition to a regular flashlight, one mom has made a convincing case that the boys must have a light that they strap around their heads, so they can illuminate the tunnels underneath the Western Wall in Jerusalem hands-free. My son’s reaction: “Are you sending me to mining camp?”

[Read Next: “Mom, Where is the…?” Why Teens Need Their Moms]

Indeed, I’m grateful that while some things haven’t changed, others have — my son topping that list. He’s cool and confident and self-aware in a way that I wasn’t at his age, or mine. He’s also tall and lanky, and his enormous clothes don’t fit into the regulation size bag I’ve bought for him. His shoes are suddenly gigantic, and I have no idea how they’ll ever make it in – I have visions of him walking like an unshod Jesus in the Holy Land. But he’s mellow about all the things that make me crazy. The stickers with his name that I ordered this year no longer came in those manly colors, and I tentatively ask him if these pastels will embarrass him. He looks at me as though I’ve lost my mind. When I point out that he has set out 15 pairs of shorts as opposed to the recommended six, he says, “You have no idea how much I sweat.” Must we go there? And left briefly to his own devices, he’s ordered 20 pairs of athletic socks, all in black. When I ask him how I will possibly label those, he shrugs and says, “Don’t worry, Mom, I’ll know they’re mine.” I dutifully roll them into balls and put them in the net bag.

“Don’t you think he should be packing himself at this age?” my husband asks one night. I turn to him indignantly, as though he’s asked me to cut off my right arm.
“Don’t you know what the stakes are?” I counter.

When we drive him to the airport for his night flight, it’s a huge camp reunion. Boys and girls are hugging, high-fiving, back-slapping. My husband and I watch wistfully for a few minutes, so proud of our son’s independence. I limit my goodbye to one big hug and a reminder to text us occasionally. Then I watch as he goes through security and is interrogated by a burly Israeli man straight out of Mossad central casting. Always vigilant for terrorists, he eyes my son, in his baggy red basketball shorts hanging to his knees and sporting a kippah from “Sammy’s bowling Bar Mitzvah.”

He asks him the standard question. “Did you pack this bag yourself?”
My son looks him straight in the eye and in a strong voice answers, “Of course.” 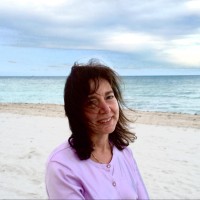 Reyna Marder Gentin practiced law for many years and is now focusing on her writing. She has had personal essays published in online journals including Kveller, Parent.Co, Mamalode, and others. Reyna's short story, 'A Reckoning,' will be published in the upcoming issue of The Westchester Review in July, 2017. She is currently studying fiction at The Sarah Lawrence Writing Institute, and is working on her first novel. Reyna lives with her husband and their two teenage children who both have one foot out the door.