I potty trained my kids and taught them how to eat with utensils. I helped them learn to speak and walk and have decent conversations. So by the time they became teenagers, I expected they would be half-independent. Turns out they are. Sometimes. As in, the times when they want to be. But the other times? Our conversations go a bit like this: 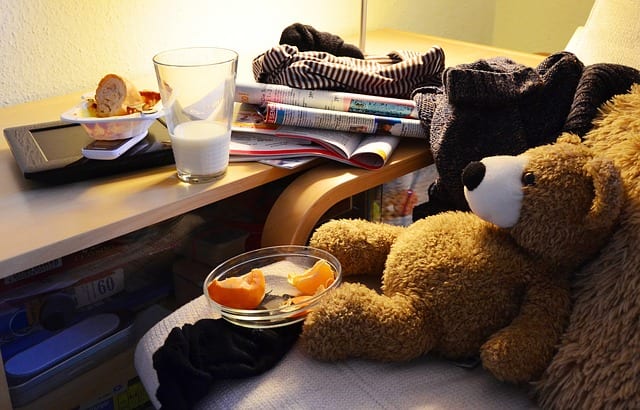 [Is There More to a Teen’s Messy Room Than The Mess?]

I thought we just covered that with the backpack hooks but my teenagers also can’t remember things.

Mom, where is cheese?
In the cheese drawer

Where is the cheese drawer?

In the fridge. I’ve kept cheese in the cheese drawer for all fifteen years of your life.
I’ve never seen it there.
It’s there.
Where?
In the fridge.
Where is the fridge?

Sometimes I ask them if they also need me to point out where the toilets are but they seem to find those on their own. Thankfully.

It is also hard for teenagers to find things like light switches. No, I take that back. They can find light switches in order to turn them on. But turning them off requires a whole different set of finding skills, which apparently, they don’t have.

[What Parents Need to Remember When Parenting Teens here]

And garbage cans, can’t find those darn garbage cans that sit in the corner of every room in our house. They don’t even ask to find the garbage cans, they just leave evidence of the finding failure everywhere – banana peels, candy wrappers, dirty Kleenex.

Neither can they find money but this is dependent upon what the money is for. If it is for them to run across the street to the store for a package of spaghetti noodles for dinner, there is not a single coin in the house and seriously, they looked everywhere. But if the money is for them to buy a candy bar at that same store across the street, money falls from the sky right into their hands.

[When Our Teens Being “Lazy” here]

I explain that sometimes looking for something requires moving. Either moving their body, their eyes, or objects that could be in front of an item. For example, the rice is behind the Tupperware with flour in it but this makes things far too complicated. Moving requires effort and a bit of creative problem solving, far too much to ask. Instead, if an item is not at eye level or in front on a shelf (the particular shelf that is at eye level) the only solution is that, “We have no rice” or, “We’re out of toilet paper.”

Moving is asking an awful lot of a teenager who prefers to stand in front of the open fridge door and stare and dream and imagine the food they might be able to eat if they thought to open the fresh fruit drawer rather than shouting into the fridge, “Mom, where are the apples?”

It amazes me that these same teenagers are able to find things on the internet, find friends on SnapChat and find things to post on Instagram. They are able to find their classrooms, the cafeteria, and the person they are dating. So all hope is not lost. In fact, sometimes I’ve wondered if I exert a kind of negative force on them.

When I am in the vicinity, I half expect them to holler, “Mom, where is that girl I’ve been dating?” But when I’m not there, she can be found with nary an effort.

So I will fade into the background. I guess that’s what moms do, over the course of years. We pull off an inglorious and slow fade, present if called upon but exerting less and less overt influence. Until they are ready to have us back. Maybe when they are twenty-five, newly married, or pregnant, or at a new job. The phone might ring. They might say, “Mom, where are you?”

I’m right here. Right where you left me, right where I’ve always been. Rachel Jones has been published in the New York Times, Runner’s World, Babble, Family Fun, and was a contributing blogger for Brain Child for two years.
Visit me at: Djibouti Jones, her Facebook page, on Twitter @rachelpiehjones, or on Instagram: rachelpiehjones

Home / Articles / High School / “Mom, Where Is the…?” Why Teens Need Their Moms
FacebookPinTweetEmail