When my daughter took her first steps, I felt the loss of that baby that had once crawled, but, at the same time, I appreciated that a toddler, with chubby little legs, would bring pleasures of its own—watching her jump rope, climbing a playground ladder.

Yet, years later, when those lovely, sturdy legs, stepped out of our front door and into a college dorm room I knew all that I was losing, just not what I might find.

Then Anna arrived home for her first semester break. She dropped her backpack, and immediately began telling me about her work splicing worm DNA. Worms, tinier than a comma, with a lovely sounding name—C. elegans.

She explained how she’d carefully removed DNA from one worm, combined it with whatever substance it is that makes jellyfish fluorescent, and then transferred this new concoction into another worm. She showed me an image on her iPhone—a luminous creature caught in the midst of an eerily glowing dance. I was captivated by her passion and her facility with scientific terminology—a language completely foreign to me; amazed that my daughter—my child—had grown into an adult who could bring me along into this new world of genetics.

As I was admiring this glowing creature, Anna suddenly shifted the conversation and said, “Oh, yeah, Mom. I was in this store near school and saw this vest I thought would look good on you.”
This switch didn’t surprise me. With her eye for fashion and love of YouTube videos on style Anna often advised me on my choice of clothes. In her teens she knew exactly what colors complimented my skin tone or what pant style suited my build.

“Oh, yeah? What did it look like?” I asked interested to learn a new tidbit of what was currently in vogue.

“No, I bought it for you,” she said as she pulled a plastic shopping bag from her backpack and handed it to me. She continued on casually, as if buying me a vest was something she did all of the time.

“I thought it would look good on you. It’s your color—purple. I hope you like it. If you don’t I can always bring it back.”

[Read Next: “Mom Jeans Are Fine” and 7 Other Lessons From My Daughter]

In that instant Anna had stepped over another doorstep, a threshold she had previously straddled, from a child who receives to a young woman who gives as well as receives.

As I opened the bag I thanked her, again and again. Here was a gift from Anna and it wasn’t my birthday. As quickly as this thought formed in my mind, I realized that it wasn’t true: In childhood Anna had brought me gifts almost daily—a poem that she wrote about me being like a circle with no sharp edges, a dandelion that she plucked from the yard, endless kisses at bedtime, or her simply saying, “I want to live with you forever.”

I recalled an early evening during Anna’s first month at college when my cell phone rang. Looking at the caller ID, I saw an unfamiliar number. I picked up.

“Hi Mom, it’s me.”
“Oh, Hi, Sweet Pea. How are you? I didn’t recognize the number.”
“Yeah, it’s Kenzie’s phone. I can’t stay on right now. We’re running into town to get a few things. I forgot my phone, and I remembered we had planned to talk. I didn’t want you to worry. I’ll call you to chat soon. Love you.” That too was a gift.

Now I found Anna’s generosity had a different flavor. She had bought me a gift with money she could have spent on herself simply because she wanted to. On one level I knew this passage was to be expected, a normal part of growing up, and yet this new reciprocity astonished me.

[Read Next: 8 Middle of the Night Phone Calls From College Freshmen]

Her gift brought to mind the times in the past that I had arrived home with a Free People shirt, a package of her favorite Pepperidge farm cookies, a new type of Rubik’s cube, gifts large and small purchased for no reason other than to please her.

“I love it!” I said as I slipped the vest over the top of my shirt. Anna was right; it fit me perfectly, as if it had been made with me in mind.

Anna returned to talking about the C. elegans, her eyes alight with the buzz of discovery. She described the scientific process, how she used a glass needle to insert the DNA into the next generation of worms, repeating and failing at these microinjections, day after day, worried it would never work, until finally she saw the glow. Her pleasure continued, as she showed me the drawings she had rendered of the worms in motion.

It was then that I understood what I had found. While Anna still looked just like herself, with the same, long, thick curly brown hair, the same milky white skin, that same giving spirit and inquisitive mind, but now, right alongside that girl, I saw a smart, generous, independent young woman.

A woman that shone, maybe even glowed. 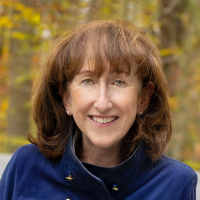 Kerry Leddy is a writer and psychoanalyst in Potomac, MD and co-chair of New Directions in Writing. Her personal essays have appeared nationally in newspapers, magazines and literary journals including The New York Times, The Washington Post, Zone 3, Washingtonian Magazine, Voice, Intima and The Account Magazine. She is the co-author of Wearing my Tutu to Analysis and Other Stories (2011), The Therapist in Mourning: From the Faraway Nearby (2013), both with Columbia University Press, and Who’s Behind the Couch (2017) with Karnac Press. She is a regular contributor to The Huffington Post and is currently working on her memoirs, The Ever After and The Good Father.