Two weeks ago my daughter, my firstborn, my only girl, left for college. She started school 400 miles from home at the small Catholic liberal arts college of her dreams. I held it together on the long drive home for the sake of my 8th grade son who had come along to help with move in, but once home I felt physically weak in the knees and shaky. 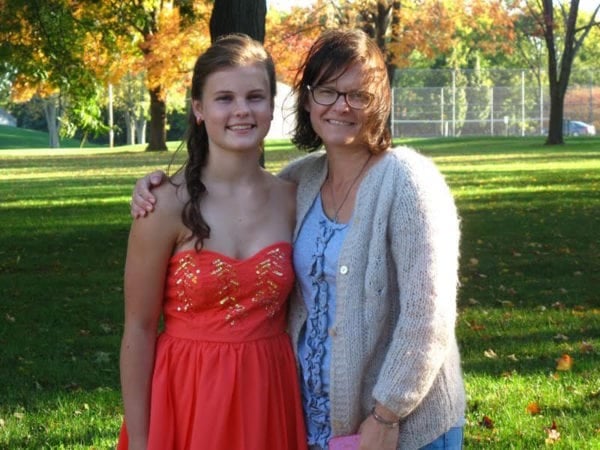 All day there was a heavy boot pressing into the center of my chest. I cried every single time I was alone, and often when I wasn’t. For the first few mornings there would be a brief moment before I was fully awake when I would think–”Uh-oh I hope she isn’t oversleeping for her nanny job” before I remembered. She was gone. How could that be? There was her beach bag, hanging in the front closet, with a wet bathing suit still in it! But she was gone.

[More about why we feel so sad as our kids grow up here.]

All summer I had nagged her to turn the lights off in her room to no avail, she left them burning every single day. But now her room was dark, day and night, and I was wracked with guilt about my summertime nagging ways. No more breakfasts with her, no more dinners, no more texts pleading for a later curfew. All of a sudden, none of it. It felt like she evaporated–or was raptured. Just, gone.

We left her on Sunday and by Tuesday I was crying so hard on the way home from work on that I had to pull over. When friends or colleagues asked how I was doing, I couldn’t answer, couldn’t speak without my eyes welling with tears. I had to ask my 16-year-old son to put her clean folded clothes in her room because I couldn’t go in. And the mere fact that her dirty shorts and socks were still coming through the laundry (although for the last time) provoked a new wave of sorrow. Was I losing my mind? I knew it would be bad, but not this bad.

[More on why it hurts so much to see our kids grow up here.]

For a full week, there seemed to be no way of thinking about it that made it any better. Of course I was happy for her and didn’t want her staying home forever. Don’t insult me, that isn’t it.

Of course I know she is going to be fine. She’s an incredible young woman, well-adjusted, kind, smart, funny and level-headed. Should I go on? I’m not worried about that, thanks. But what I really didn’t want to hear, from myself or anyone else was “You’’ll get used to it.”

The only thing worse than feeling the pain of missing her was imagining “getting used to” her absence. She’s been living with me since 1997. Preschool playdates, a 3rd grade roller skating phase, five whole years of cello lessons and concerts which nobody even mentions now, movie nights, messy rooms, inside jokes, tears, eye-rolling, stair stomping, favorite sweatshirts, a broken wrist, a bit of Prom drama.

From baby swim lessons to Varsity tennis matches. I was there for all of it. Every puking night or fever or couch cuddle. I know all her favorite Spongebob episodes. A lifetime with her, millions upon millions of remembered and forgotten moments, and now she was gone. I could find no way to think it through that didn’t make it worse in some way. And I wasn’t sure I wanted it to get better because that would mean some other kind of loss.

But then, one afternoon, I had a simple insight which did help. One which helped take away both the fear of loss and the fear of getting used to loss. It is this: since the day I became a mother, my family has never been static, it has always been dynamic, always changing. It has been changing and evolving since 1997 when I become a mom in my 20s while struggling to complete a PhD in Religious Studies, and it is still changing now.

First I had a bald-headed baby girl with my then-husband and we had a tiny little family of three. Then two years later I had a baby boy with big brown eyes and there were four–my attention no longer focused like a laser on the firstborn, everything was different. Three years later I had another sweet baby boy. Our work lives had changed and he was often sick in the first two years–our equilibrium as a family of four was upset for a time, and then it settled down and there was a new normal–two parents, 3 kids.

Then, when the children were 12, 10, and 7, we divorced. Our family felt shattered, and there was a lot of pain and a lot of grief. But it turns out the family wasn’t shattered, it had changed–in a big way–and it wasn’t done changing. After several years I fell in love, got married, and became a stepmother to a beautiful 5-year-old girl. More change, more adjusting, more love. Two and then three of the children became teenagers–not home as much, not there every night for dinner. And now we’ve arrived at another change: one of us lives in a dorm in the next state instead of upstairs.

It’s the end of something important, sure. But thinking of it not as a break but as part of decades of dynamic change helped me. My family isn’t broken, it is reconfigured–like it was when new members were added through birth or remarriage. It has changed, but it’s been changing all along. And while I still miss her with all my heart and will never stop, viewing the family this way has made it more bearable.

Meanwhile, while I’ve been working through this, Family Weekend is now two weeks closer!

Dear Parent Sending Your First Born Off to College

Karen Park is a professor of Theology and Religious studies at St. Norbert College in De Pere, WI. Her blended family includes two daughters, two sons, and lots of love and change.  She can be found on Twitter at @parkandwreck.