We have arrived at the halfway point of our first year as empty nesters. I knew not having children physically at home would be radically different. And it has been. But the change that knocked me off my feet wasn’t the absence of children, but an absence of self.

These last six months my sense of purpose and identity have been a swirling storm of rumination. Suddenly every choice I had made in the last twenty years was placed in a spotlight, facing an interrogation that at times left me confessing to things that weren’t true.

I started by compiling mental lists of my various decisions, my points of failure, circumstances beyond my control, and situations completely of my own making. I have defenses for all of it! Across the years of raising children, we each face decisions. We worry about the right path, we study, we discuss, we stress, but we make a choice and keep moving.

Sure, you glance back and wonder if that was indeed the “right” decision but mostly you forge ahead because children don’t stop growing while you wade through regret. But now! Now, it was as if every single one of those decision points and the doubts that went with them were re-released all at once. Mounting my own defense has been exhausting and has taken up a lot of time.

I’m thinking about my mistakes

And perhaps that’s why it got a foot-hold in the first place. I have the mental “free time” to do battle. When I wake in the morning, there are no thoughts regarding who I heard in the kitchen at 2am and who might need help this morning. No mixing my daily tasks with what I might need to do for the kids. I’m not carrying four schedules in my head, wondering if there’s any chance of having dinner all together. Instead, there’s all this mental energy – space for thought – that had suddenly opened. In that void, the interrogator put my worth as a person on trial.

The interrogator knew all my self-esteem weakness and plucked every last string: A jury summons that asks for my occupation. A need for a resume. A social media app reminding me of events 7 years ago. An acquaintance’s Facebook post about an accomplishment. A photo of myself 10 years ago. A sense of failure snuggled down next to the feeling that I’m the only person ever to feel this useless.

You gave up your career for your kids. You have accomplished nothing for yourself. You became a mother and, despite all the warnings not to, you lost yourself. You made all the wrong choices. Being a mother isn’t enough. Just look at all the other women who have done it all.

I can only assume that mothers with paying jobs and careers probably have a gap in their armor too. A spot where the interrogator can stab with a similar argument – just switch out some of the nouns. No one escapes parenting doubt. And comparison is a wickedly powerful tool that the interrogator exploits brilliantly. In fact, there are several versions of this essay that veered off into attempting to spin all my personal decisions into polished and presentable versions of success. But no matter how well-intentioned, I just ended up denigrating someone else’s choices in order to elevate mine.

The interrogator just gains power when we turn on each other.

For a while, I break down and confess: Yes, I gave up. Yes, I’m a failure because I couldn’t manage to raise children, stay healthy, and write consistently enough to pursue publication. Yes, I am just a mother and now that the kids have gone, I have nothing to offer the world. Yes, I lost myself. It is all my fault. I did everything wrong.

But did I really do everything wrong? I’m sure Brené Brown would definitely have some words for me at this point. Some confessions were, of course, true, but irrelevant. For example, I did indeed “give up on my career” to stay home. However, I did not enjoy my first career and the luxury to walk away from it was welcome and appreciated.

I slogged through my self-accusations and got bogged down in details of 10, 15 years ago. The shame spiral was particularly quick these last six months. I cannot identify an epiphany moment when I understood how to actually escape. It was as if I had been dragging myself through a tunnel, knee-deep in the mud of self-defense. Then the tunnel ended. Because that’s what tunnels do. And I realized, I was actually producing the mud that kept me stuck. In continuing to mount a defense, I was buying into the entire concept of a trial in the first place.

And so when pressed again: You became a mother and lost yourself. You did it all wrong. My reply was strong and honest: I do not have to justify anything to you.

Based on experience, I know that no matter my blueprint, life will happen (aging parents, financial unpredictability, whatever parenthood looks like with adult children), the plans will be modified and I will adapt. And when that interrogator shows up at the next major milestone, I’ll refuse to hear the case.

Home / Articles / Parenting / Empty Nest / I Became a Mother and Lost Myself. Did I Do Everything Wrong?
FacebookPinTweetEmail 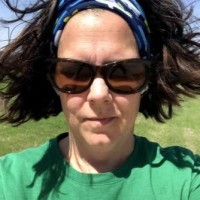 Jen Machajewski is a mother and writer whose journey has gone through many labels: stay-at-home-mom, technical writer, homeschooling parent, non-profit volunteer, medical advocate, Texas marching band mom, and, now, empty-nester with two in college. Currently, she is working on a novel about mothers, daughters, and an aging house. She lives near Austin, Texas with her husband, and their empty nest is filled with a 125 lb retired therapy dog, music, and cookies. Find her on Instagram and www.jenthewriter.com