I can be a bit of a neat freak– I’m not afraid to admit it. Clutter makes me go bonkers, I prefer coats to be hung in the closet rather than draped over a chair. I’m that type of annoying person who cleans up as I’m cooking so I don’t have to sit and look at a big mess while I’m trying to enjoy dinner. Messes and disorganization affect me on a physical level and I’m just a happier person when everything is in its place.

The problem is I have three teenagers who don’t share my mess-induced anxiety. Not even a little bit. In fact, they constantly tell me I expect them to be perfect. And if not leaving their backpack and shoes in the middle of the floor, and wiping off the counter after making a super sloppy peanut butter and jelly sandwich equals perfection, then yes, I expect that.

I was driving them up the wall by constantly harping on them about their messy rooms, and they were sending me over the edge by ignoring me. So, we’ve come up with a solution that works for everyone: They keep the common living areas clean, and they can keep their rooms the way they want (within reason), and I won’t set foot in their hovels their rooms unless it’s absolutely necessary.

Like if we’ve run out of glasses and spoons and all my kids are nowhere to be seen and I’d like to delve into that Gelato I bought without having to share. I’ve tried eating it with my hands to avoid going into their scary places, but it’s just not the same. 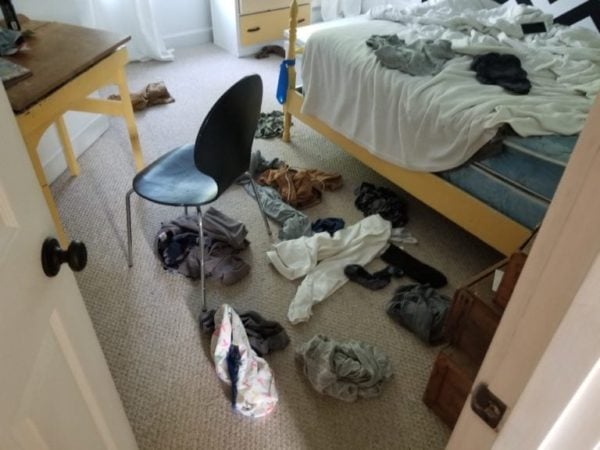 I have to mentally prepare myself, and there are times when I have to pry spoons off the rug or rake underneath their bed to get them, but I do the dirty work. Then I run out of there before I have a chance to stand in the middle of the room with my head spinning because you can’t see the floor, their bed fitted sheet is in a wad in the middle of their mattress, and there seems to be things growing on their nightstand.

If you were to walk up the stairs in my house you would be met with a dark hallway since they keep their doors shut because they know I can’t even begin to take a peek into the land of “I don’t give a sh*t what my room looks like, Mom, so there.” Walking by makes my hair stand on end. What I don’t know can’t hurt me, right?

I sometimes feel like they are just leaving banana peels and tags from their new clothing on the floor to prove a point. They constantly tell me small things like that don’t matter (yes, they do), but I decided to go along and figure if they feel that way, they can live in their little filthy boxes.

I’ve tried to agree with the sentiment but I’m not wired that way. Plus, I’m the boss, I pay the mortgage and as long as my kids pick up after themselves in all the places in our home I have to go in, I can handle them treating their room like a pig pen.

That doesn’t mean they can start carving on the walls, and if they ever get any kind of bugs or varmints they have to kill them with their bare hands. Other than that, this mama has no rules about how her kids have to keep their bedrooms. If they would rather sleep in a bed that’s not properly made with a pile of dirty socks and school papers that I was probably supposed to look at, good for them. It’s their space, they can roll around in the filth and the thought of it doesn’t make my eyes twitch at all.

When they were younger, I’d march in there and dust and vacuum on the regular after throwing all their toys in the toy box. It didn’t feel like too much of a big deal since most of the messes they made were in the living room or kitchen.

They’ve gotten bigger and somehow messier, and now that they are spending so much time up there, eating, putting on makeup and doing other unmentionable things with their alone time, I haven’t the energy to go in. My blood pressure spikes, the vein in my forehead pops, and it’s not good for anyone within a mile radius of me.

For now, they can have their rooms as messy as they want, as long as they abide by my rules in the rest of the house. I’ve tried making them keep their rooms clean, I really have. And I’m just so much happier ignoring it and investing my energy into to other things. It wasn’t worth it.

But you know what is worth it? Venturing in there with my eyes covered, feeling around for a spoon to sanitize and enjoying a pint of Gelato solo without feeling like I need to burn their room down and start over. There’s definitely power in ignoring the mess as long as I don’t have to look at it.

Making A Scene In A Store Happens With Teens, Too

10 Ways To Make Summer Last With Your Teen