“You can’t go home again” goes the old adage. And intellectually we all know that is true. Things change, people move or pass away, buildings are torn down and new ones rise in their place, old friends make new friends, commonalities that brought us together don’t apply anymore. But nostalgia is a powerful force and for many of us nothing brings it on in waves more than returning to our college campus.

We arrive for reunions at a beloved alma mater and, after the small talk and the photos of kids are shared, we pretend over wine that the campus is still ours, and that it can’t possibly have been 10 or 20 or 30 years from the time we dressed in neon and shoulder pads and wrote papers on typewriters and brewed tea in hot pots, drank weak beer or wine coolers, and took spring break trips to Florida without worrying what the future would bring. All around us are reminders of the time we shared together.

The dorms we lived in, the dining hall that provided hangover brunches, the academic buildings, the campus center, the street where the off-campus apartments were. Whether it was homecoming or reunion, for a few brief hours or days the campus was ours again and we could pretend nothing had changed.

But at no time does the nostalgia of the past and the reality of the present spectacularly collide as when the end of our child’s long, long road to college ends at our alma mater.

My daughter resisted the idea for years. My ex-husband and I met at that college. My late sister attended that college. My daughter’s godfather was my college best friend. For years, suggestions that she consider the school were met with a firm “no way.”

Then she toured, and sat in on some classes, fell in love with the school, applied, got in, received generous financial support. And boom! That was that.

Naturally I was thrilled and the next several months passed in a blur of forms and deposits and orientation and dorm shopping. The lists and the organizing and the nerve-calming kept us all busy as move-in day loomed closer. And I truly thought I was ready for what it would feel like to move her into what I still thought of as ‘my school.’

Then on that fateful day as I walked up the stairs to her room to find it was located exactly one floor below my own freshman room, time seemed to stop and it felt like 1984 all over again. The halls, the stairwell, the room, the bathroom, the view, it was all the same. I had stood in these halls taking photos before dances, I had slept, studied, cried, laughed and partied in these rooms, yes, I had even gotten sick on cheap wine in these bathrooms. And here I was back again.

As my daughter would say, “What even was happening?”

The year was a learning experience for her of course, but also for me. I had to try to tamp down my tendency to lead with “I went here!” when meeting her new friends. I had to smile rather than protest “I KNOW” when she would give me directions somewhere on campus.

And I had to learn to navigate the now tricky world of friendships with my favorite professors who were, now, also her professors. Was I the mom of a student? Was I former student? How much reminiscing was enough? How much was too much? Do I ask how she’s doing in class or not? Did I wear the hat that said “alumni” or the hat that said “mom?” (As point of clarification I am talking about actual baseball hats not metaphorical hats. I’m a gay woman. It’s a thing.)

I worried, sometimes too much, that I was intruding on an experience that should be solely hers.

But then mid-way through the year a friend from home was passing by campus and took my daughter to lunch. She texted me later that it was ‘so great’ that we shared this common bond and that my daughter seemed pleased and even comforted by her parents’ history at her college. I admit, I exhaled a bit.

That campus had been my whole world for four years. It was where I made the best friends of my life, charted a course for my future, learned how to debate, think critically, hone my acting skills, and write. It was where I found my voice. But both the beauty and the sadness of college is that none of us ever truly own the place. We get to rent it for four years that live forever in our memories.

This is her turn.

Her time to stride down the dorm-lined street calling out to people she knows. Her time to set up shop with her coffee and lap top in the student center, half working, half socializing. Her time to stay up ‘til the wee hours talking about life. Her time to find her voice.

Someday – a day that will come far too soon for either of our likings – we will both be alumni sharing our ‘this one time at college” stories. But for us those stories will mean even more because at the center of them is a school we share.

And that? Is worth the tuition alone.

Dorm Shopping List: THIS is Why It’s Such a Big Deal

Grown and Flown Spring Style: Transitions Can Be Tricky Katie Collins is a native Mainer who has called New Hampshire home for the past 28 years. A nonprofit development professional by trade, Katie also has over 20 years of experience in community and professional theater and in 2013 was awarded NH Theater Award for Lead Actress in a Drama or Comedy. She resides in quiet domesticity with her adorable wife and her talented college student daughter.

Katie is a lover of musical theater, the original Star Trek, cheeseburgers, the original Carol Burnett show, and weekly lap swimming at the local YMCA, and tries very hard not to take herself too seriously.

“It feels like someone clipped my wings, and I’m grounded.” My son’s feelings are justified. His first year of college was less than epic. He was abruptly booted out of his dorm because of the outbreak and forced to stay home in the teen cave with Xbox. As a psychologist and single-father, I expected him…

With many colleges opening in August parents are once again getting prepared for drop-off day. You may be thinking about what to buy for their dorm room or what to say to them as you leave, but we want to touch on a few practical matters you should consider before you drive away. Not all… 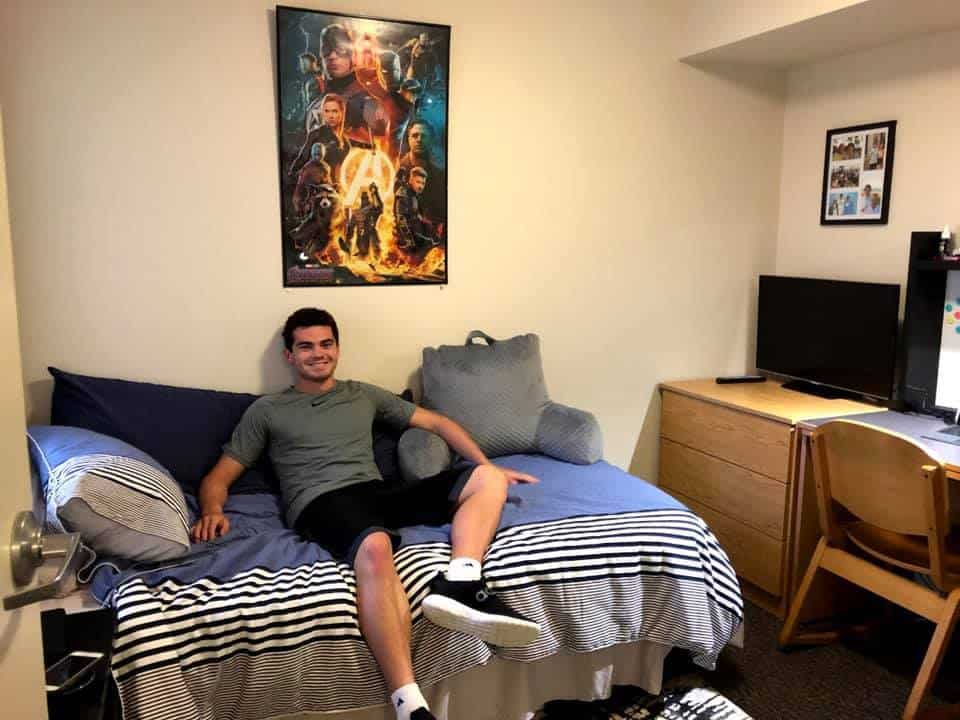 How to Find and Save Money on Dorm Bedding Deals

Here is the most comprehensive list of stores that sell dorm bedding that we could find; they had to stock twin xl sheets to make the cut, and many stock other dorm essentials, too.  Your teen might want to visit a store to feel the fabric choices before they make a decision. It’s also best…