Our tribe once had a name: we were the Boy Moms.

We were the ones who stepped on Legos in bare feet in the middle of the night and yelled at our sons to please stop jumping off of the back of the couch. We demanded that they not hit each other with light sabers and we set up backyard obstacle courses to be run endlessly, or at least until nap time, in football helmets. We found ourselves using our outside voices in unlikely directives, things like “No, you may not pee in the backyard!” and “Which one of you put the toad in your sister’s dollhouse?” Raising these odd, darling beings, so different from ourselves, demanded that we band together with like-minded women to survive. [Read Next: All Hail the Queen: Mothering Boys Will Surprise You]

The world said that it was sweet, when they were little, to love our boys fiercely, and to know that they loved their moms in a special way too. In middle school, when we knew that they were mostly Boys pretending and learning to be Men, we were the first ones there when the facade fell away. In high school, the Boys got even bigger, closer to Men, but so did the stakes, and sometimes the mistakes, and the Boy Mom tribe understood this better than anyone. Collectively, we prayed and worried and reassured each other about their safety, their futures, their undeveloped frontal cortexes.

And even when they left for college, the world said that it was all still ok to miss them, to call them, to hover a bit when they were sick, to wish you heard from them more often when they were not. That time was maybe the best of both worlds for the tribe. The workload was easier, even if the worry was not, and it was fun to see them begin to be Men, to have Their Own Lives. But we still had them home sometimes. Most importantly, we still were home, always.

[Read Next: I Forget My Kids Are All Grown Up (For a Second)]

And then, somewhere along the way, we looked around for our Boy and there was a real, live Man in his place. The world told us, then, that these Men were too old for their moms to care so much anymore. The experience, expertise, and sheer endurance that we had honed, individually and as a tribe, were abruptly declared obsolete, and moms who persisted were roundly criticized. Since these were young Men, and not young Women (for whom the rules are entirely different), it was especially important for moms not to Worry Too Much, not to Call Too Much (which was how much, exactly?) and never to Say Too Much about our feelings, their lives, or much of anything at all. Any infraction could cause the world to remind the moms, and not in the nicest way, that their sons were, after all, Grown Men who had Their Own Lives. If a mom still persisted, the world might employ the nuclear option: she didn’t want him to be a “Mama’s Boy”, did she? That threat could silence even the most resolute. We looked around and saw only our tribeswomen standing with us, the same stunned look on all the moms’ faces. At least we were all together in this boat.

The summer my son was six, we lost him in Disney World. He was gone for probably half an hour, an excruciating eternity during which his father and I searched, wild-eyed, and desperate, around a fantasy Town Square that suddenly held real danger. We pushed to the front of lines, forcefully and frantically describing him while interrogating bystanders: dark hair, dark eyes, glasses, yellow shirt with a blue bike on it, have you seen him?? do you know where we go?? His father somehow climbed a pole to get a better perspective, hoping to spot him from a bird’s-eye view. I closed my eyes and tried to get in his head: where would he have gone, what would my smart boy have thought to do? His dad and I kept meeting up again in our separate, zigzagging searches, always finding the other still empty-handed, the wildness in our eyes growing.

[Read Next: Whoever Said that Raising a Boy Is Easy?]

And then, in an instant, we saw him, dark hair, dark eyes, yellow shirt, just exactly the same as I remembered, exactly the same as we had described. I cried out loudly at the sight of him, and it was a sound more animal than human; it was the guttural, female sound of labor and of loss. The boy explained that when he realized he was alone, he had looked for a “mom with a stroller” for help. The costumed Townsperson who had led him to us explained Disney protocol: take the child by the hand, and just keep walking, around and around, in the area where he wandered off. No mother will ever go too far from that place.

So our boys are Men now, and yet we rely on the tribe as much as ever. In the tribe, there is no Worrying Too Much, Calling Too Much, or Saying Too Much, and we need each other to question, reject, and sometimes adhere to the world’s rules. As when our sons were younger, we sometimes still find ourselves saying things we never expected to say, and banding together to survive. Like our long-lost middle school Boys, we are just Boy Moms pretending and learning to be Man Moms. We are here for each other when the facade falls away.

When our sons are far from us, their dads sometime see the big picture better, have a broader perspective. But their moms remain, in the place where they first wandered off, closing our eyes and trying to get in their heads, sometimes feeling the pangs of labor and loss. No mother will ever go too far from that place.

To the Dad With the Little Boy Picking Flowers 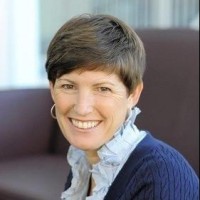