My daughter turned 13 this weekend. She spent Saturday with her friends at the movies and then I dropped them off in front of Bath & Body Works to shop by themselves while I roamed the aisles at the nearby Barnes and Noble. More than once, I caught myself checking my phone for a missed text asking me to meet them at Claire’s or Ulta. There were no texts. It’s a weird thing, being a parent to a teenager. I was a teenager once. I was such a teenager. I had a poster of Michael Jackson on my closet door and Beastie Boys’ License to Ill and Paul’s Boutique tapes in my dual-cassette record player. I had a phone in my bedroom with a cord that stretched the length of my daybed, and a black and white TV with a screen smaller than the laptop I’m using right now.

I wore neon clothes. Then blue jean miniskirts and twist-a-beads. I begged for Guess overalls and Tretorn tennis shoes and Liz Claiborne purses.

I got my first French kiss as a teenager, on a sectional couch in my high school sweetheart’s basement watching an IU game while his parents watched the same game upstairs. I lost my virginity as a teenager on that same couch. I smoked my first cigarette as a teenager and got high for the first time as a teenager.

When I was a teenager, I had a friend who lived two houses up the street from me. In the middle of the night, we would sneak out in her mom’s car – a stick-shift – before either of us had our license. Once we drank a bottle of vodka and, in our drunkenness, kept calling it akdov – a word that stuck throughout our high school years.

[More on What We Need to Remember When Parenting Teens.]

First you’re a kid. And then you’re a teenager, making all the mistakes teenagers make. You go to college and you make more mistakes, but you learn some things too and you make new friends, different friends. And then you fall in love. You marry, and you both have jobs, but barely make enough to pay the $288-a-month rent for your tiny two room apartment on the busiest street in your small town.

You get your first dog, a black Lab, and name him Elvis. By the time he’s six months old, he’ll get so big he outgrows your apartment, so you start looking for your first home. A bungalow house built-in the early 1900’s, with hard wood floors and a full-sized kitchen and a washer and dryer that the previous owner leaves in the basement. The basement is really a cellar – grungy and cold – but you have your very own washer and dryer. No more Sunday nights at the laundromat, counting quarters and doing crossword puzzles in plastic orange chairs that are impossibly uncomfortable.

And then, after you’re both settled in and your black Lab is no longer a pup, and you both have careers, with salaries and benefits – you find yourself at a Mexican restaurant sipping margaritas and having dinner – and everything changes.

I remember I was eating salsa and chips with a friend and two of her friends who I had just met that night at the restaurant. Someone ordered shrimp – it may have been me – and the smell of it at our table turned my stomach inside out. And I love shrimp. We were seeing a movie that night. A John Cusack film. I don’t remember the name of the movie, or the plot, but I remember Cusack was at a motel and there was a lot of rain. Before we went to the theater, we went to Target to buy snacks. I left my friend – and new friends – alone in the candy aisle.

“I need to grab a few things while we’re here, I’ll meet you guys at check-out,” I told them.

I rushed to the pharmacy section, grabbed a pregnancy test, and went through the check-out lane on my way to the women’s bathroom. Sitting in a red-walled bathroom stall, with my pants around my ankles and holding the pregnancy test I just peed on – I waited for the two pink lines to appear. Sure enough, they both showed up. The shrimp – or better, my inability to stomach the shrimp – had been a dead giveaway. Without getting up, I took my flip-phone from my purse and called my husband who was out of town on a work trip.

“I’m pregnant,” I told him as soon as he said hello.

“What?” he asked. I said it again, and then explained about the restaurant and the shrimp, and the people I didn’t know, and how we were going to the movies, but I had this feeling, and there was no way I could sit through an entire John Cusack film not knowing if I was or wasn’t pregnant – which is how I ended up calling him from the Target bathroom.

“I’m okay,” I told him, “but I can’t talk because I’m sure Stacy and her friends are wondering where I am. I’ll call you tonight.” It would have been a weird thing to tell people I just met that I had been taking a pregnancy test in the Target bathroom.

That’s how it happens. You’re kid. And then you’re a teenager. And then you’re 30-years old, eating Mexican food with people you don’t know, and for the first time ever, the smell of shrimp makes you want to vomit.

And then, thirteen years later, you have a teenager, and almost nothing has been the same since.

[More on How Teens Can Learn from Parents Mistakes.]

You still make mistakes, and there are new jobs and new houses, and new dogs who turn out to be just as big as that first black Lab you loved so much. Life somersaults forward. Baths and bedtime routines. Hospital visits and sleepovers. You take your teenager to the mall to shop and when she and her friends exit the car, you can barely keep from jumping out after her and holding onto your daughter as if both of your lives depend on it – but, really it’s only your heart that feels the crunch.

I looked up that John Cusack movie. It was called “Identity” – which couldn’t be more perfect if I had made up the title myself since I spent the entire film thinking about all the ways my life – and who I was in it – was about to change.

Related:
Teenagers: I Want to Remember These Last Times

Dear Mom Of Young Children: These Days Will Disappear

15 Things This High School Teacher Thinks Every Parent Should Know 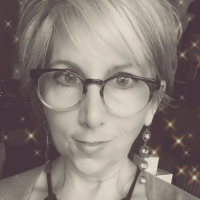 Amy Gesenhues spends her days working full-time as a reporter for Third Door Media, covering the digital marketing industry on MarketingLand.com and SearchEngineLand.com. In between work, being a mom, taking her dog for walks, and binge-watching Homeland with her husband, she blogs at www.AmyGesenhues.com. You can find her on Twitter at @AmyGesenhues.