A dad offers his daughter advice about being a college student and living in a freshman dorm.

Now that you have moved into college, I can’t help but reminisce about my own freshman dorm  days–back in Ikenberry Hall, at James Madison University, in the fall of 1989. It’s tempting to tell you that life at “Ike” was all sunshine and light. But careful consideration leads to a somewhat different conclusion.

First off, “Ike” had all the amenities and design sensibilities of a minimum-security prison. Our “suite” there consisted of three whitewashed-cinderblock cells arranged around a 10×12 common area. The latter was furnished only with a rickety coffee table and a brown twill love seat that somehow smelled equally of chemical disinfectant and spilled beer.

Thanks to one of my suite-mates, the rickety table was soon topped with a 19-inch Zenith TV. This received exactly one local channel, and only as long as it didn’t rain. The TV mainly served as an elaborate coaster until someone connected up an old Nintendo system, which subsequently supported the gaming habits of a dozen pasty guys in our dorm. Within a week or two, we also had a pyramid of empty Milwaukee’s Best beer cans in one corner. These stood as a sort of shrine to our newfound freedom (as well as our lack of taste). They also added to the stale-beer smell.

We had no air-conditioning or cell phones

We had no air conditioning, no cell phones, and only one computer–though we did have a lively running battle over music. From one side of the suite, my buddy, Dave “Pee Wee” McBride, kept up a near-perpetual flow of Led Zeppelin, working regularly through the band’s entire oeuvre.

I wasn’t happy in college at first

What’s more, I wasn’t always happy there, especially at first. My high school girlfriend and I had broken up just before I left. (We told everyone it was mutual, including ourselves, but I’m sure we both knew it was her idea.) Plus, I was off in a new place, away from my family and friends–no longer an athlete, no longer a guy in a band, no longer a recognized face.

[Read Next: How to Help Your College Freshman When They’re Homesick]

It’s enough to make anyone feel a bit lonely and scared, waking up in a smelly, alien world, amid unfamiliar faces. It’s also enough to unearth some deeply human insecurities: The fear that everyone else has it all figured out and that we’re being left behind. The fear that we’re truly alone.

But that, my dear, is the last thing you actually need to fear. Because you’re not alone even in feeling that way. In fact, I guarantee that nearly every person you meet over the next several weeks will have similar feelings.

Life is an adventure

Life is not a mystery, filled with clues to be unraveled. Nor is it a math problem waiting to be solved. It’s more like an adventure story, composed of escapades, quests, and discoveries, not to mention a bunch of bizarre but often lovable characters.

[Read Next: Advice to College Freshmen From Recent Grads]

And what comes next, of course, is just the next chapter in your life story. The adventures are getting bigger now, and the tension is building. But most importantly, the central character keeps developing. She’s getting smarter and bolder and ever-more-interesting, discovering truths about herself and the world around her. And she’s meeting a bunch of remarkable young women and men. People who are just as smart as she is–if also, sometimes, just as confused. Characters who, in some cases, will turn out to be the friends she has yet to imagine.

Of the fourteen guys who lived on my hall freshman year, six of us chose to live together sophomore year, too. Five of us became fraternity brothers. And four of us (at least) were in each other’s weddings.

I found my way through school

In other words, we may have been noisy and smelly and none too pretty–and I, at least, may have been a little insecure. But we also became a band of brothers. And as I found my way through school, I discovered many other brothers (and sisters), too, through a series of new adventures.

Some involved Greek life; others Shakespeare. Some involved parties; others late-night cram sessions. A bunch involved studying abroad in Italy. And the most important of all? That one’s a love story, of course. It involves a girl named Mary, though you know her better as “Mom.”

In sum: When I arrived at Ikenberry Hall, I didn’t have it all figured out. Sometimes I felt scared and alone. Sometimes I made mistakes or did stupid things. Sometimes I didn’t think I would make it through.

And that, dear daughter, is life.

I stumbled and bumbled but found a way. I made some truly remarkable friends. I learned from my mistakes. And, in time, it all became part of an excellent adventure–the story through which I became myself.

But whatever you do, don’t worry. You have everything you need to make it through and succeed–including friends who will never leave you, sisters who’ll be waiting to hug you, a mother who will make your room as beautiful as can be, and a father who’s always ready to talk, text, or write–and not only with dorm life advice.

You’ll be terrific. Because that’s what you are. Good luck! Godspeed!

I love you,
Dad

P.S. Mom read this over before I posted it. She agreed with everything–except any (inadvertent) suggestion that your room might ever smell like stale beer. 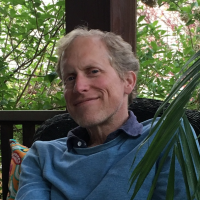 Steve Sampson is the father of three teenage girls, to whom he regularly writes open letters at truthsandwonders.com. He is also head of communications at Arabella Advisors in Washington, DC. When he isn't busy working with words or hanging out with his wife, you'll often find him behind a drum kit, walking his dogs, or kicking a soccer ball.