I was walking my dog in early January when I overheard a woman say (to my dog), “I see your mom bought herself a hat, but didn’t buy anything for you.” This was true. I had succumbed to Philadelphia Eagles fever and bought myself a beanie. The paraphernalia popped up everywhere prior to the Super Bowl and it was hard to ignore.

The Eagles had embraced the underdog label and our entire family was caught up in the experience. The woman was right, I should have bought our dog something to commemorate the Eagles’ epic season.

When my son was in fifth grade he created a PowerPoint presentation on why we, as a family, should have a puppy. As I recall, it was very well done with pictures and descriptions of breeds, as well as promises about the amount of work he and his sister intended to share to make it happen. His presentation was the culmination of months of discussion, rationalizing, and straight up begging. My son could have been the world’s youngest lawyer, because he made a very compelling case. Yet I resisted the idea. The reasons were as simple as my oldest childhood friend put it, “You know who will end up taking care of it” but also quite complicated. I thought we had experienced our quota of loss. Within a brief span of time both of my parents had died along with many other family members and beloved pets. My kids knew loss. They had attended too many funerals for their age and I just could not imagine taking on another being to love and, eventually, to lose.

My children barely remember our first dog, Ernie, a Boston Terrier named after Ernest Hemingway. Ernie had to be put to sleep, a comforting euphemism, after an early morning seizure that blinded him in one eye. He was given a grim prognosis, leaving my husband and me to make the difficult decision.

Our pediatrician recommended that we wait until our son or daughter asked about the dog’s absence. Then we were told to answer their questions using simple, honest language. “Ernie is gone.” “No, I’m sorry, Ernie is not coming back.” “Ernie is in Heaven.” The beautiful thing about children is that they take this type of information in stride. You may have to repeat it a few times, but they understand and move on in ways that I, as an adult, envy.

The idea of getting another dog seeped in over the next three years, through tiny cracks in the armor around my heart. Neighbors’ dogs seemed to seek me out for attention, sitting in my path waiting to be noticed as I went about my day. Dogs who made appearances on our friends’ Christmas cards lingered on shelves and in drawers demanding attention. The dogs in these photos always looked kind and wise; the children seemed somehow better off with this additional four-legged family member in their midst. That is what dogs do: they find a way in and make themselves members of your family unit.

I started perusing the numerous dog finder web sites. They were cute. They were lovable. None of them were right. I was not ready. Then one day I came across a dog from North Carolina being held in a shelter in New Jersey, an hour or so from where we lived. She reminded me of my own childhood dog, Dobsy: a mutt, white with brown spots. Like Dobsy, “Emma” was a rescue with enormous, kind brown eyes. Could she be the one? I closed my laptop but those eyes stayed with me. This dog had called out to me. 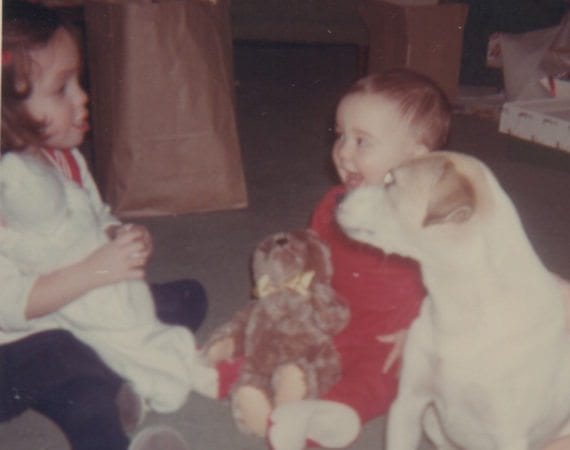 The following Saturday the four of us drove to the shelter. The dog was adorable, but very wary. The manager said that she was around a year old, showed no signs of aggression, but appeared to be deeply traumatized. She had two matching scars on her hind legs the origin of which we will never know, though I imagined her jumping barbed wire fences to escape whatever her life had been. She was a survivor against daunting odds.

The shelter allowed us to take “Emma” for a test walk. This was something she did not appear to know how to do. And, as an aside, none of us were crazy about the name. These were fixable issues. My husband did not like that she would not heel and that, nose to the ground, she pulled with all her might in protest against the leash. He worried that she was a “ground dog”. This still makes us laugh, because even he did not know exactly what he meant. In retrospect, it’s pretty clear that he was expressing anxiety over the enormous change that was about to take place. This dog would become a part of our family.

When we arrived home, a group of friends materialized thanks to the magic of social media. We discussed the idea of changing her name and one of my son’s best friends suggested “Daisy”. The only Daisy I had ever known was from The Great Gatsby, but somehow this dog looked like a Daisy. We all agreed it was perfect and the name stuck.

For the first six months, we adjusted to Daisy more than she adjusted to us. I had to move her from place to place. Except for going outside, she made no attempt to move herself. If I put her on the couch (the one piece of furniture we agreed we would let her on) she stayed on the couch. If I put her in another room, she stayed in the other room. She also made no sound, not a growl or a bark or even a whimper. Adopting Daisy was like acquiring a stuffed animal that breathed. She was perfect.

One issue we did not anticipate was her fear of men. Daisy did not seem to trust my son or my husband. If left alone with one of them, she would attempt to hide. Sometimes when she heard a deep voice, she would start shaking. She favored my daughter and me. We were worried, but patient. With children you can say “use your words” but with a rescued dog the trauma remains a mystery. If she lived with us long enough, we knew she would learn that every member of our family could be trusted.

My son was the one who broke her silence. Nine months after moving in with us she was on her couch looking out the window when he got home from school. She had grown accustomed to our daily routines and knew when to expect kids rushing in the door. But on this day a low unrecognizable growl came out of her mouth, moving into a single bark when he came in the door followed by lots of tail wagging. Daisy had found her voice.

Daisy has been part of our family for over five years now. My son and daughter who campaigned for her place in our world are off studying in France and Italy for the year, staying in touch with her via texted pictures and the occasional FaceTime chat. As predicted, I am now her primary caregiver. It may sound cliché to say we cannot imagine our family without her, but we all feel the truth of that statement. Her muzzle has sprouted a few gray hairs, leading us to believe she may be older than we thought. But she’s still playful, spontaneous, and accepting of deep voices when they are kind, barking only when necessary.

Grad Gifts for Him 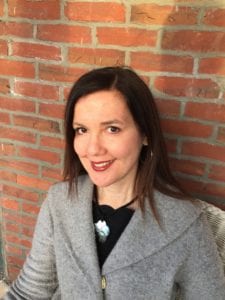 Margaret Burton is a freelance writer in Narberth, Pennsylvania. She and her husband of twenty-five years are surviving empty nest syndrome and learning to share the kitchen. Look for her upcoming essay on the first year without kids in the Philadelphia Inquirer.