If there’s one trait I’ve tried to instill in my children, it’s kindness. My 21-year-old has it in spades. She’s the kid with the big heart, the girl everyone confided in, a leader in her church youth group and sports team. She’s the kid who worked with kids in Ghana and Thailand and talked about becoming a minister.

She’s the kid who gave her parents minimal sass as a teen and who lived up to our every hope—good grades, admission to a great college (even though she believes standardized testing is a crime against humanity), a responsible and loving sister, daughter and granddaughter. She is our good girl, and kindness is her currency. Until she taught us that being a good girl isn’t as important as being kind to yourself. 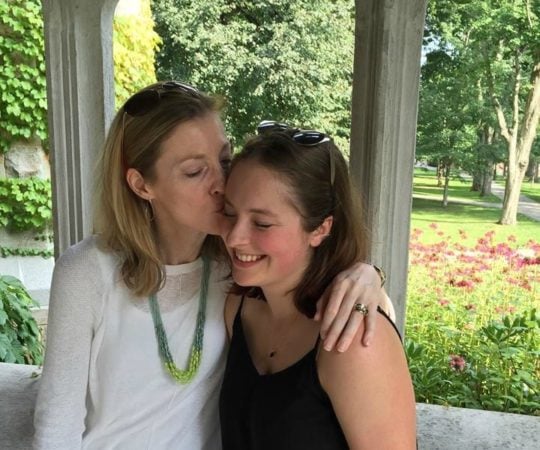 On her first weekend in college, our daughter called my husband and me at midnight, frightened; a friend had been assaulted at a college party and she was trying to help her. We had barely dropped her off at her dorm, and she was already dealing with a terrifyingly adult situation. She hung up to try to find a security officer, and I lay in bed awake for several hours, feeling utterly helpless. There was nothing I could do, except trust that she would fall back on her good judgment and common sense. Everything we’d tried to teach her was being put to the test. Yet that insidious middle-of-the-night voice insisted, What if we had failed?

In the following days, she supported her friend and even managed to turn the experience toward the positive. Outraged that the campus rape hotline was not staffed on the night of the party, she took her grievance to the administration, and eventually founded a club on campus to raise awareness of sexual assault. We were wildly proud that she’d put her values into action, yet somehow we missed that the entire experience had rattled her deeply.

There were more signs. She was stressed and tired in the winter of her sophomore year, running the club, directing a play, dancing, and keeping up with a demanding course load. She called in tears in February, clearly overwhelmed. She talked about leaving school and coming home; we talked her down and visited a few weeks later. She seemed to regain her equilibrium. Fast forward to her junior year. I take a picture of her in the airport lounge as she is waiting to board a flight to London for a year abroad. She looks worried around the eyes, not herself. I think she was trying so hard to hold herself together—not for herself, but for us. To live up to our expectations and stay on the path we’d set her on. To be the daughter we wanted her to be, someone different from what she felt inside. Knowing what I know now, if I could go back to that moment in the lounge, I would have said this: Be kind to yourself. Don’t turn your heart outward all the time; remember to hold yourself tight.

Turns out, she knew this better than us.

In late October, after two months in London, she called again in tears. She was depressed and struggling. In the end, the decision was easy. We knew she had to come home. We couldn’t let our vision of her future cloud what has happening right now, not with her mental health at stake. She was telling us—loud and clear—that she needed to stop being the good girl and set off on her own distinct path. That took guts and strength.

And so she dropped out of college and came home. It was like a different kid got off the plane. Lighter, ready for something else entirely, and simultaneously scared and excited to figure it out. In all honesty, I still have to swallow hard before explaining to a well-meaning friend that no, she’s no longer in college, and yes, she is working on a goat farm in California. But she is happy—and isn’t happiness the greatest kindness we can give? To our children, yes, and as our daughter showed us, to ourselves. Susan Spencer is the editor in chief of Woman’s Day. She is the author of a book about kindness—When Action Follows Heart: 365 Ways to Share Kindness (Hay House), available at Amazon and B&N