Let me start by saying I love my four boys. They bring me immense joy, hours of laughter, strengthen my soul, and deepen my understanding of unconditional love. But lately? Well some days, I prefer my cat.

The two middle children returned home after mandatory college closures brought them here to finish their semester. Oh, what fun, I thought. Just think how great the extra time with them will be, I thought. And while board games and bonfires were plentiful the first week, it all quickly faded into what has now become a strange little sitcom.

Being the only female in a household of 5 men has its challenges under normal circumstances. So, it shouldn’t be surprising that being back together has brought to the forefront observations I can’t escape or explain.

Nine Ways I Know My Boys Are Home

Ok…what in the literal hell? Why would there be a fork in my bathroom? Under what circumstance would it ever make sense to walk in the bathroom and see a fork lying on the back of the toilet? As far as I know, there is only 1 use for a bathroom, and it ain’t for eating pasta! Oh, and there was no plate. Just the fork. Steak skewer perhaps?

There’s only a handful of uses for crushed ice which include: margaritas, daiquiris, and Moscow Mules. I also don’t mind it in the occasional restaurant soft drink. But let’s be real. We’ve not been out to a restaurant or bar in almost 7 weeks! And yet, every time I go to fill a glass with cubed ice out of my refrigerator, crushed ice always comes out. Why? I have 1 child, only 1, who LOVES crushed ice and constantly is switching it on our refrigerator. I hope he’s not mixing up margaritas, as he’s a minor…unless he’s making a drink for his Momma.

Raising a household of young men, I’m no stranger to the concept of a 24/7 kitchen. Despite the fact I cook dinner almost every night for my boys, it appears they are but a bottomless pit of starving ogres roaming the house in search of the next unlucky food to be devoured. (Perhaps they should check in the bathroom?) Most recently my youngest son descended from his bedroom cave into the kitchen to make a plate of nachos, at 1:30 am. Traces of corn chips and shredded cheese littered the counter and floor. When asked why he was eating this late, I’m pretty sure his response was, “Me hungry.” Got it.

I used to think the only time change we would experience in our lifetime was going from Standard Time to Daylight Saving Time and back. Of course, that’s just ridiculous. We operate on BST – Boy Standard Time. All of the hours in my house have shifted. Breakfast is now at 1:00 pm, lunch at 5:00 pm, dinner around 8:00 pm, and bedtime is 3:00 am. Hence, the 1:30 am snack.

Our home is native to the very popular, must-see attraction known as Mt. Dirty Dishes. Mt. Dirty Dishes can best be viewed between the hours of…oh hell, you can see it any time of the day or night. But as legend has it, as soon as the kitchen is cleaned and every dish meticulously washed and put away, something mysterious occurs. Slowly seeping out of cupboards and drawers, every pot, pan, skillet, and plate clutters the sink spilling out into an eruption of crusted oatmeal bowls, glasses of curdled milk and knives stained with smeared peanut butter. See #3 and #4 to help explain what I assume is only but a supernatural phenomenon.

On a recent mid-afternoon snack urge, I skipped to the kitchen to see what yummy treasures I might find hidden in my cupboards. First, there was an empty pop tart box, followed by an empty oatmeal box, next to and an empty cereal box. I frowned. A frosted brown sugar and cinnamon pop tart sure sounded good.

I shrugged and looked in the next cupboard where I found an empty bag of potato chips, an empty box of Cheez-its, and several nearly empty bags of tortilla chips. And by nearly empty, I mean just crumbs left. I turned to my refrigerator hoping to find a cold beverage only to be greeted by an empty gallon of milk and several half drank cans of soda. My treasure hunt had turned into trash collection and I was the one left muttering, “Me hungry.”

If I ever need to find one of my boys, I just need to follow the proverbial ‘yellow brick road.’ A lone shoe here, a discarded t-shirt there, a smelly gym towel up ahead. The Wicked Witch of the West has been known to appear from time to time, flying in on her broomstick threatening to disconnect their most precious possession, WIFI. Thankfully the Good Witch of the East shows up as well, reminding the boys there is no place like home… so pick up after yo’ damn selves!

8.      A Phrase That Parallels Nails on A Chalkboard

This could quite literally be the most annoying phrase ever muttered from my boy’s lips:

“Boys, I need your help unloading the groceries.”

“Boys, have you started, finished, or looked at your homework today?”

Middle of a game?? Where is that Wicked Witch?

Listening to my boys carry on a conversation is like trying to interpret a foreign language. Pepega. MonkaS. Poggers. PogChamp. This lingo comes from a video game streaming platform called Twitch, which makes sense since they are on it 14 hours a day. I supposed I could slip into my 80’s slang and throw around words like gnarly, bodacious, dweeb, and gag me with a spoon. My kids would probably just give me a sideways glance, while muttering, “Ok, Boomer.”

I can’t be the only Mom out there whose children are driving her crazy right now. But despite the crazy, there is kindness. In the mess, there is forgiveness. In the language, there is love. And the next time the boys say to me, “Mom, can you go to the store? We don’t have anything to eat in this house.” A slow, mischievous smile will appear, along with a wicked glint in my eye as I reply, “Why yes, boys, of course. But right now, I’m in the middle of a game.”

Home / Articles / Young Adults / There’s a Fork in My Bathroom: 9 Signs My Boys Are Back in Town
FacebookPinTweetEmail 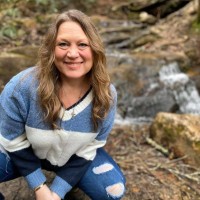 Jill Orban is a freelance writer and mother of 4 teenage and young adult boys, as well as 40 other teenagers through her church youth group. She is a worship leader, ½ marathon runner, and novelist in training. She enjoys binge-watching Netflix and carb overloading. You can find her writing on her blog or connect with her on Facebook and Instagram and Twitter.