“Look!” I proclaimed to my teenage daughter, 14, as we scrolled through old photos on our computer. “It’s the time I gave you the “Jo” hairstyle!”

I grinned at the photo from years ago when my daughter was little. My daughter, however, seemed unimpressed. She might not know what I was getting geeked about, but I bet other moms my age do.

You remember the “Jo” hairstyle, right? The one that Jo Polniaczek sported on the TV show The Facts of Life: two small side ponytails that pulled back into one larger ponytail.

There is just something about The Facts of Life that touched our generation. Certainly, I’d argue it was much better than those inane kids’ shows that my daughter used to watch. Most of the characters on those shows came off as snarky or obnoxious, finding themselves in ridiculous, unreal situations week after week.

Meanwhile, years ago on The Facts of Life, our friends Jo, Blair, Tootie, and Natalie were facing challenges like prejudice, date rape, living with disabilities, and more. It was honest and real, as well as entertaining.

I loved watching The Facts of Life growing up and I feel like it taught me a lot.

Seven Life Lessons from The Facts of Life

In other words, life is not all sunshine and lollipops. Some days or situations suck. Some don’t. But that’s life. And The Facts of Life girls always came out stronger and braver for enduring the bad times as well as the good.

2. Everyone needs a Mrs. Garrett in her life

Edna Garrett was hardworking, caring, kind, and funny. She was a disciplinarian, an entrepreneur, and a role model. We should all be lucky enough to have a Mrs. G in our lives.

3. Friends can be family

4. Speaking of friends, make sure one can make you laugh and one knows about cars and fixing things.

Seriously, now that we are adults, isn’t it imperative that you have a friend who cracks you up as Natalie did? And a friend who knows how to fix things or what might be wrong with your car like Jo did?

5. You can reinvent yourself

In the first season of The Facts of Life, there were a ton of girls living in a dorm. By Season 2, there were only 4 girls living above the cafeteria. Then the 4 girls graduated and moved off campus, running a food shop that later they revamped into a totally 80’s gift shop.

They didn’t do the same thing year after year. They took risks and changed things up. I shouldn’t be afraid to reinvent myself either.

6. There are consequences to your actions

In the second season, Blair, Natalie, Tootie, and Jo got into trouble. Their punishment? Living above the cafeteria and working in it to repay the damages.

They didn’t make excuses, sue the school, or have their parents buy their way out.

7. Never underestimate the power of a good hair style

And decades later I felt the power of Jo’s street smarts, courage, and sass when I gave my then seven-year-old daughter the “Jo” style all those years ago. So while my daughter might not get nostalgic, happy vibes looking at that picture of her “Jo” hairstyle years ago, I always will.

Thanks for the life lessons and the memories, The Facts of Life!

Facts of Life Stars Reunited for a Christmas Movie 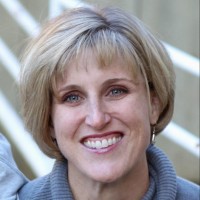 Katy M. Clark is a mom of two who lives in Michigan. By day she works in academia. By night she writes about motherhood or the '80s. Her work has appeared on Grown and Flown, Your Teen for Parents, Scary Mommy, Today's Parent, and more. She also embraces her imperfections as a mom on her blog Experienced Bad Mom