It’s been 11 days since I dropped off my firstborn at college, 2,458 miles away. As I was lacing my shoes to go for my run this morning, the tears started again. I should have just removed my shoes and returned to bed, but what would happen after that? I’d cry and fall back asleep, and then what? I’d already gotten 9 hours of sleep the night before, the night before that, and the night before that — more sleep than I’ve had in at least twenty years — the first time in years that no amount of sleep is the right answer.

If I didn’t step out the door for my run, I knew I’d spiral down a path from which it may take months or years to come back.

My reaction to my son leaving for college was unexpected

This is unexpected. I knew that dropping him off at college would be hard, but I don’t think my tears are about that. Sure, I miss him — my sweet sensitive boy who has proven to me how incredibly rewarding a mother-son relationship can be — how it can rival and beat the most intimate mother-daughter one. Even at the age of seventeen, on the very rare occasion that I’d decide to attempt a weekend nap, he’d find me. “Mom, why are you lying down?” He’d climb on my bed beside me.

I was the one who wanted him to go miles and miles away. I wanted him to get a chance to live in New York City, meet completely new and different people than the ones he went to high school with. I wanted him to take interesting classes, like Introduction to Cultural Anthropology, that I had never taken. He is doing what I never did. He is living the life I have always wanted for him. Even if the few texts from him since he left have been about logistics and the few phone calls have been rushed, I’m happy for him.

This is, after all, what I wanted.

Over the last couple of months, as his departure was approaching, I’ve had a slew of strange symptoms. I randomly got dizzy and had to sit down. I’ve had my first migraine, followed by intermittent headaches. My eyes have been dry, my tailbone has been hurting, my left hand goes numb, and my right hip aches. Despite exercising six days a week, as I have been for years now, I’ve been feeling progressively weaker.

I was in a yoga class a week ago and had been holding plank for a mere ten seconds when my arms started shaking. How could that be? Not that long ago I was at a retreat doing three intense yoga sessions a day. A few months ago, I ran my 4th marathon. This morning, it took everything to get through five painful miles.

The fatigue has been overwhelming, the tears come out of nowhere. The only other brief time in my life that I was this overwhelmed was when I was in medical school. I had tried to set the video recorder to tape some show on TV and couldn’t figure it out, and I sat down and bawled. I got help. Since then, I haven’t been overwhelmed by the mundane.

“I think there is something wrong with me,” I insist to my husband. “Maybe I have some rheumatologic disease, maybe I’m coming down with MS or some other neurologic disorder. Something isn’t right. Maybe all these various symptoms are somehow related and cause my unexplainable sadness.”

My husband agrees I should see my doctor but suspects it’s all about our son. I’m a pediatrician going through a list of adult differential diagnoses to see which one may fit; I finally called and made an appointment with my internist to stop my self-diagnosis and have her rule everything out.

Maybe all my symptoms are depression related, even if that doesn’t seem to fit in my mind. I went through a lot in the last two years, but our whole family did. My middle child came out as transgender, turning my life upside down, my husband had two back surgeries and had to take some time off from work.

My youngest daughter was hospitalized for two weeks — she is fine. I tell my husband that it seems strange that I would be able to handle all that, but not our oldest leaving home. That’s why I’m resorting to self-diagnosis of some other condition.

But maybe my husband is right. Maybe my son’s leaving has tipped me over the edge after two years of being in constant survival mode. A few nights ago, I dreamt of yelling at him about leaving food out of the fridge overnight. He was standing on the stairs, his eyes bloodshot.

“Mom, why are you yelling at me? I’m not even here. I don’t even live in this house anymore,” he said laughingly before suddenly vanishing.

I woke up whimpering in the fetal position, the dream the most vivid one I’ve had in a long time. Maybe my husband is right.

On my run today, I turned around at a mile and a half so I could go home. Within a few blocks of our house, I told myself, you can’t stop at three miles. You have to run at least five. Five miles is the arbitrary number of miles I set as a goal for myself eight years ago when I started running to save myself. I was drowning in motherhood, I had lost myself. Running was the life preserver that helped me find myself. If I didn’t run five today, it would be the first step to losing myself again.

I started running away from my house again. Within half a mile, I noticed a heavy set elderly lady who had fallen. A young girl was helping her get up and by the time I reached them, the elderly lady was standing upright. The young girl was asking her if she needed to be walked home. See, I told myself, look at this sweet young girl helping this woman. Armon would do the same — that’s the kind of son you’ve raised and sent into this world. There is no reason to be sad when there is so much beauty in the world.

I kept going, putting one foot in front of the other. Everything will be ok, you’ll figure this all out, there is beauty all around you, and this will pass. But I hit the stop button on my Garmin sports watch when I reached five miles and cried.

You May Also Want to Read:

How Not to Worry About Your College Student

Home / Articles / College/Off to College / College Parents / My Son Left For College; I Didn’t Expect To Feel This Way
FacebookPinTweetEmail 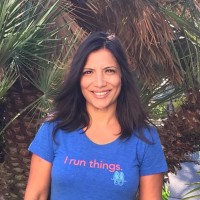 Paria Hassouri, MD, is a pediatrician, mother of three, and transgender rights activist. She is a public speaker and has written articles for multiple media outlets, including the Los Angeles Times, the Washington Post, and the Huffington Post, and presented stories on stage through Expressing Motherhood. A proud Iranian-American, she spent her formative years in Pittsburgh, Pennsylvania. She published her memoir Found in Transition: A Mother’s Evolution during Her Child’s Gender Change in 2020. She can be found through her website pariahassouri.com and on Instagram(@laparia) and Twitter(@pariahassouri).