Falling aspen leaves draped the sidewalks in brilliant yellows, while my daughter and I browsed clothing stores and talked about boys at our favorite mountain town coffee shop. As the two of us sipped across from the one another, I reflected on how far we’ve come.

At one point, we were practically strangers. It was only three years ago that we’d adopted her into our family. I’d been optimistic that a connection between the two of us would be automatic, even natural.

After all, I’m not only her adoptive mom…I’m also her birth mother.

I relinquished my daughter for adoption when she was born. When I was a junior in college, a set of skinny pink lines appeared on a pregnancy test and I wilted onto the bathroom floor.

I’d always dreamed of being a mom one day. Just not yet. I was in a committed relationship but there were no plans for marriage. I didn’t have a steady income. I had no way of providing the kind of life I felt my baby deserved. The most expensive thing I owned was my purse. After months of agonizing over my choices, I made the heart wrenching decision to make an semi-closed adoption plan. At the hospital, I held my newborn and caressed her tiny hand as time dwindled away. When the adoptive couple arrived and I had to say goodbye, I whispered into my daughter’s ear, “I will always love you.” My cries echoed loud in the hospital corridor as I left without my daughter.

My only comfort was a promise given by the adoptive parents that they would hold my daughter close and bathe her in unconditional love.

Hundreds of seasons would come and go after I’d said goodbye to my daughter. As the years passed, my home filled to the brim with children. I’d married my high school sweet heart and birth father to my daughter, and given birth to three boys. Then, I was asked to adopt another son from a family friend. I nurtured each of my boys with utmost care, playing tag during the day and reading superhero books at bedtime.

While I reveled in motherhood, my thoughts wandered to my daughter. Ever so often, I’d pull a memory box from underneath my bed that contained photos and letters sent by the adoptive parents. I would re-read the letters, soaking in the few details of her life that I was privy to. Over time, my heart began to heal as I held onto hope that I would see my daughter again when the time was right.

At age six, my heart erupted in joyous celebration when the adoptive parents invited my husband and me to spend a day together at the zoo. My daughter held my hand as I pointed out the radiant colors of a monarch butterfly. Before saying goodbye, I tucked a strand of blond hair behind her ear and told her, “I love you.” She smiled shyly and whispered, “I love you too.”

At age twelve, she met her brothers for the first time. The boys beamed with pride at their big sister and fought over who would sit next to her at the dinner table. When daughter played with her brothers in a backyard play set, I noticed that her adoptive parents became silent, almost distant. Their mood had shifted from cheerful to cool. I couldn’t put my finger on what caused their disposition to change. Still, we all promised to stay in touch.

At thirteen, I bought my daughter a charm bracelet for her birthday.

At sixteen, my husband and I visited her hometown and took her out to dinner.

At seventeen, she spent a weekend with our family.

Soon after, her adoptive parents mailed a card thanking us for spending quality time with our daughter.

At eighteen, my daughter enrolled in college and basked in a new season of life.

Then, everything suddenly changed.

We learned that the adoptive parents were no longer supportive of her relationship with us. She’d been instructed to choose between her birth family and her adoptive family. There was no in-between or chance of negotiation. I was baffled by the adoptive parents’ change of heart and immediately got on the phone, pleading with them to consider all of us a vital part of our daughter’s life. They wouldn’t budge. Instead, they hurled insults at me.

They accused me of conniving to steal their daughter.

They questioned my motives and tore at my character.

They jabbed at my most vulnerable spots as a birth mom.

I sat flabbergasted. What have I done to deserve this?

When the adopted mom belittled my daughter, my voice escalated into shouts of “Why can’t you just love her?!”

Days later, her adoptive parents removed all financial support from our daughter and said they regretted the adoption. They turned their backs on my daughter and disowned her. I felt betrayed.

I had entrusted my daughter to them and now they’d abandoned her. The pain of watching my daughter endure loss was almost as unbearable as the day I left the hospital without her.

It was my husband who brought up the idea of re-adoption. “We can take care of you,” he told her.

After months of thought and prayer, our daughter agreed to be re-adopted into our family. My husband made the announcement to our four boys while inside a pizza buffet that they were about to gain a big sister. “Cool!” they cried out in unison before excusing themselves to grab another slice from the buffet. To them, she was already a part of the family. For me, I now wondered if I could be a good mom to her after missing the foundational years of her life. Panic struck as I questioned my ability as to parent my birth daughter. What if I don’t meet her expectations? What if I disappoint her? I hung my head and prayed I’d be a good mom.

My daughter wore a bright teal dress while the boys sported collared shirts and khakis for the adoption hearing. My husband put on a suit and tie, while I wore a navy blouse with black slacks. I clicked my heels nervously outside the courtroom, wondering if I was doing the right thing for my daughter. When I turned to face her, my fears lessened. I realized that my heart had been fastened to hers ever since I carried her in my womb. I promised to give her the best life possible and would do anything to make that happen. I couldn’t provide for her at birth, but I would grasp at the chance to take care of her as an adult. When our names were called to enter the courtroom, I turned to my daughter and smiled. She smiled back.

Today, as I sit across from my daughter, I still recognize traces of hurt. I wish I could heal her deepest wounds and erase the years of separation. Instead, I can only love my daughter unconditionally and tell her, “I’m here.” I can teach her love and forgiveness. I can walk alongside her during times of doubt and struggle. I can help her find the strength and courage to forge ahead. We can create new memories in our still-growing relationship.

I’ve spent time in reflection about my decision to make an adoption plan. Did everything turned out as planned?

Would things have fared better if I’d kept my daughter in the first place? I can’t say. Sometimes we have to take steps of faith without seeing the whole picture. We can only do what we think is best at a particular time in life. I can’t dwell on the “What ifs.” I can only embrace the journey and discover how I was changed because of it. 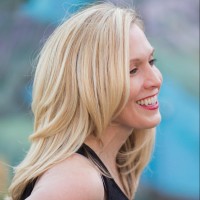 Adrian Collins writes about the real-life complexities of being both a birth mother and an adoptive mother. She has testified before the Colorado Senate committee on behalf of the Colorado Children First Act. Published on a variety of sites, Adrian studied journalism at Point Loma Nazarene University in San Diego and is married to her high school sweetheart where they currently reside in Castle Rock, Colorado. Adrian is working on her first memoir about hope and healing through the journey of adoption. She can be reached at http://adriancollins.org, Facebook, Instagram or email at accollinsfam@gmail.com.