It happened on the way to Target and took me by complete surprise. I didn’t see it coming; I thought that moment had drifted just beyond my grasp. Parker and I were stopping at Target to pick up a few items that were on my list and 57 others that weren’t. The ten-minute car ride wasn’t anything out of the ordinary.

Long gone are the days that I could see him safely tucked into his car seat, curious about the world beyond the treetops outside his window. Long gone are the days of reaching back to have his tiny hand wrap around my finger. Instead, we talked, we laughed, and we even sang a few of the songs that popped on the radio. This was our ‘new normal.’

We pulled into the parking lot and got out of the car: No stroller or diaper bag, no special toy to keep him occupied as I raced through the store. Instead, he walked around the car, and we headed towards the Target doors. The new normal didn’t even register with me as we walked through the parking lot until we got to the crosswalk in front of the store’s entrance.

At that moment, I felt it.

We stopped at the crosswalk and looked both ways, and then I felt his not-so-little hand grab mine. It was only for a split second and purely out of habit, but it sent an electric shock through me. He was completely oblivious to what he had done or how much that tiny moment melted me to my core.

In one second flat, every trip to Target with a diaper bag and stroller came rushing back, and at that moment, I realized that my not-so-little guy was still in there. I knew I needed to let go of his hand as the social ramifications would be devastating if a friend from school ever saw such a sight right before middle school. (In my day, it would have been equivalent to showing up with a Rainbow Bright Trapper Keeper when everyone had already made the switch to unicorns.)

Middle school is hard enough without “getting caught” showing affection for your mother in PUBLIC! I don’t remember who let go first, but our ‘new normal’ had resumed before we entered the store. I was smiling, but my throat seemed to close a little tighter. My eyes became blurry as tears threatened. You can’t cry in a magical place like Target unless it’s because they put out the “Back to School” supplies too early again.

My blurry-eyed daydream-daze caused us to drift past the dollar aisle without even realizing it. I even walked right passed the women’s clothing without a second thought. (Possibly because Target believes everyone can and should wear mid-riff tops. Wrong Target….just wrong. My body type rejects that premise.)

The little boy who once sat in the stroller as I navigated from aisle to aisle stopped at the clothes and then headed for the snacks, completely ignoring the rows and rows of toys. There was no waiting for him to make up his mind about what toy to buy that day. I remembered the countless hours I’d stood in aisles 11-15 waiting for him to make his final selection.

I wanted to warn younger moms to savor the moment

I wanted to warn the other moms in the toy aisle to pay attention, savor the moments, and remember the feelings because someday, that’s all you have left — the memories and moments of places where you once stood.

I will always remember the day he reached for my hand in that Target crosswalk. I will continue to pay attention to the moments we are making now in our ‘new normal’ knowing one day I will look at those with the same blurry-eyed-day-dream daze as I did today.

I will forever remember when it happened, on the way to Target. 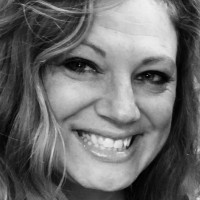 Adrianne Robinson is a typical mom. She works hard to create memories for her children that will make them look back and smile more than they cringe. She's also a daughter, granddaughter, sister, wife, best friend, author of the book "Growing Up Johnston, "and fifth-grade teacher…trying to be the best of each and usually coming up short. Her mind works overtime and she finds she needs a little space to “think out loud.” This is it.