I have a bone to pick with whomever designed human beings: who believed having a menopausal woman and a teenager living in the same house at the same time was a good idea?

I had my child later than the norm: I was 35 when Z was born. And that was a good thing because I would have been a terrible parent in my 20s. I have always known that (although I do wish I had the energy I had back then). But I’m certainly not the only one having children at 35 or beyond. So what’s with the design flaw?

I love my child. I do. Really. I’m pretty sure… Let me check and get back to you on that.

This week has been one that makes me think an ad on Craig’s list to sell the teenager doesn’t sound like a bad idea at all. Hell, I’ll give him away. For some reason, everything to him is magnified for the worst at least tenfold lately:

He’s going to perish from working “all the time.” He works 22 hours a week now that school is out.

I asked him to change the sheets on his bed. It’s been a week since I asked. You don’t want to know how long the current ones have been in residence. Clean sheets are still sitting on his dresser. According to him, I’m too controlling. Yeah, kid: I also control your access to the Internet in this house. Remember that.

He has the privilege of having a car at his disposal, but suddenly he wants the sporty car to be available to him at all times. I did offer a second choice, which was not driving at all. He did not see the humor.

I reminded him that before he leaves for college in the fall, his bedroom and the “teen cave” in the basement need to be cleaned out. This has been discussed for over a year now. He is appalled that I even bring it up.

I don’t recognize this spoiled brat at all. This is not how I raised him.

What happens to the teenage brain on hormonal overload? Why do they think this kind of behavior is acceptable? More importantly, when does it stop?

I have friends who say “Oh, the nice kid comes back eventually. Usually around age 20.” I know they’re trying to be supportive, but holy crap, I don’t know if I’ll last that long. At least not without dealing with my kid in a manner in which society may decide it’s time for Dana to go away for a while.

Because I don’t look good in Jailhouse Orange or Asylum White, I decided to dig around to see what I could find to help me hold on. In her article “Are Teenage Brains Really Different From Adult Brains?” Molly Edmonds states, “In adults, various parts of the brain work together to evaluate choices, make decisions and act accordingly in each situation. The teenage brain doesn’t appear to work like this.”

I also found out it is also the absolute last section of the brain to develop.

That explains a lot.

Add to this the hormonal changes at work, and it’s a wonder any of us lived to see 20: the adolescent brain pours out adrenal stress hormones, sex hormones, and growth hormones, which in turn influence brain development, and not always for the better. Testosterone increases to 10 times the previous amounts in adolescent boys.

In other words, our kids’ brains are a hot mess.

Of course, I can’t say that mine is much better.

Being in menopause is an interesting experience (aside from the hot flashes, night sweats, and the mood swings). According to neuropsychiatrist Louann Brizendine, MD in her book The Female Brain, “Before menopause, a woman’s hormones encourage her to avoid conflict. Our estrogenized brain circuits cause us to respond to stress with nurturing activities that are intended to protect our relationships.”

In other words, from puberty to menopause, a woman walks a fine line between making sure relationships are steady, and tries to keep anger or aggression dialed down. And that urge doesn’t stop until the hormone supply that fuels it is cut off during menopause. Brizendine continues,

As the ratio of testosterone to estrogen rises, the anger pathways in a woman’s brain become more like a man’s. Now she gets angry, whereas before she may have just bitten her tongue. At the very least, she’ll stand up for herself and say, “I’m not doing that anymore.

Wow. That explains why those little old ladies are so feisty!

So, in a nutshell: here is my teenage son, feeling the surge of hormones flooding his brain and pretty much incapable of understanding adults; and here am I, experiencing the drain of hormones, leaving me less likely to put up with his crappy hormonal attitude.

Great combination. Like bleach and vinegar. Or drinking and driving. Or Bonnie and Clyde.

These are the odds we face every day as parents. Good thing kids are so damn cute, because it’s the only thing saving them sometimes.

Move in Day: 12 Things That Will Save Your Life 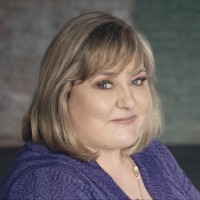 Dana McKenna is an essayist, playwright, mom of an Amazing Teenage Boy, and partner to The World's Most Interesting Man. She is currently owned by two medium sized, bossy cats. You can find her weekly blog “I feel like I’ve forgotten something” at reminddana.com.