My dad had a distinctive voice… like soft tires on a gravel road. When he died on July 3rd, all I could really think to myself was that I would never hear that voice again. The next thought I had was, “Crap, I better make an appointment with my therapist!”

I hadn’t seen her in a year. It’s been a decent year, exciting and busy but emotionally peaceful… well, as emotionally peaceful as a woman standing on the edge of Menopause Mountain and sending her first-born to college can be. Halfway through our session, she chuckled and said,

“You’re going to HATE your homework.”

My purpose in seeing her was to flesh out and hash out the lifelong negativity that surrounded my relationship with my dad. Her assignment for me was to find the blessings in our relationship. I said” You’re right. I already hate it.”

To put my relationship with him into perspective, I will start with the day he died. I had a house full of guests and was having a dinner party. As soon as my plate hit the table, I heard my phone ring and saw that it was my brother. We don’t typically call to chit-chat, so I knew something was up. I walked into the hallway and he said “We lost Dad today”. And I went back to my dinner party and behaved as if nothing had happened. Because… in almost no way did his passing impact my immediate life, although I knew I’d have to “process it” emotionally at some point, which is how I ended up 6 weeks later having to write a letter to my dad thanking him. Ouch.

My dad spent the first 12 years of his life stained with Tennessee red clay, and the remaining 60 years trying to wash it off. He was the odd man out in his family. Simple, uneducated hill people with not many social graces were his roots. My dad was bookish, sensitive and not at all athletic. He had the vision and wisdom to know that the only way out of his social and financial “standing” and off the Ford assembly line was to go to college, a goal his father frowned on and did not support.

There, he met my mother… another sensitive, bookish and not athletic girl with pale skin and dark hair. Somehow, they got married, had a baby and took turns working to pay the other’s tuition. They graduated and got jobs. Growing up, one of the things I KNEW was expected of me was that I was to get good grades and go to college. The other thing I began to “know” was that my dad did not like kids. His or anyone else’s. Rejection by a parent cuts a chasm that is so deep and so wide that really, only the love of God can begin to fill the void.

We didn’t start off that badly, but over the years, the rift grew and with it my bitterness and his inability to be a dad. He was a “father”… he dutifully picked us up every other weekend, as per their custody agreement, but he didn’t spend time with us. We occupied ourselves with our step-siblings and the TV. We could watch anything we wanted and for as many hours/days as we wanted as long as we weren’t bugging him. We just never “got” each other. When he picked us up for the weekend, as we pulled into the garage, I would turn to him and ask “When are you taking me home?” I didn’t mean this as an insult, I was a terribly anxious child who missed my mom. I simply wanted to know when I was going home again. To his fragile ego and insecure self, this question felt like rejection. We continued this dance until I was almost 13.

Then, with almost no warning, he left the east coast and moved to California. After that, I saw him once, maybe twice a year. He was often back in town for business, but I began to discover that more often than not, he wouldn’t tell me when he was near. I guess once a year was good enough for him. We continued this dance until … well 2016.

At almost every fork in the road, he made deliberate choices to avoid seeing my brother and me. This went on for decades. At some point, when you’ve had enough rejection, you just close up that piece of your heart. My brother was always more freely giving of himself, able to be in the moment with my dad. Not me. I had to wall off that piece of my heart and soul that longed to be a Daddy’s Girl. Over the years, he would often say I was the “Apple of his eye” and “Daddy’s Girl”… words that fell so hollow in my ears that I could no longer listen to them. Actions spoke louder than words.

My neighbor once told me “God wastes nothing.” And it’s true. What I learned was that words with no action are really just manipulation. Words with actions to support them are reaffirming and reinforcing. So, I became a girl with high standards after I worked out all the kinks of having “Daddy Issues.” Once I had my own children, I became even less understanding of the rejection. My kids really are the apples of my eye. I love them both so deeply and dearly that I cannot fathom a world in which I would drive past their homes and keep on driving.
So, how do I process this? I guess the truth is, I’ll never fully understand why he just could not be available. And the question that will ring in my ears forever is “Why didn’t he love me?”

I did do my homework. It wasn’t as hard as I thought. In the end, I hope to remember my dad as the person who taught me it’s ok to leave the butter on the counter, there’s no such thing as “overdoing Christmas,” education and discipline are the cornerstones for success in almost every aspect of life. And most importantly to raise my kids feeling loved, wanted and enjoyed.

This Mom’s SOS from Christmas Break is Perfectly Hilarious

25 Years Of Motherhood: What Being ‘Here’ Means to Me 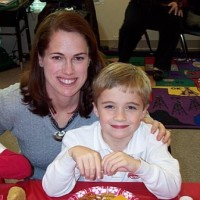 Mom of 2, married 23 years, late in life animal lover (1 horse, 3 dogs and 1 cat). I have an MSW in child & adolescent behavior... Not that it served me well with Video Game Boy and "Couldn't Wait to Fly The Coop" Girl. To contend with my impending Empty Nest, my BFF & I opened a dog grooming salon. Living The Dream.