As I get ready to send my firstborn off to college, I’ve been thinking back over the teachers who have shaped him along the way. His elementary school teachers gave him a love of reading and developed his writing skill; in middle school, they encouraged him to work ahead in math. In high school, his teachers nurtured his passion for music and opened the door to learning Mandarin.

But the instructor who prepared him the most to succeed in college was China. Yes, I mean the country.

When my son was 15, we spent two years in Beijing

Let me explain. In June of 2019, my husband’s company sent our family to Beijing to live for two years. There probably couldn’t have been a worse time than high school to uproot our two sons (then ages 14 and 15) from life in the US. They missed out on many rites of passage their friends experienced, like high school proms, football games, driver’s licenses, and summer jobs.

All the promised things, like traveling to Japan with the soccer team and weekend jaunts to Thailand, were off the agenda due to the emergence of a crazy new virus. Banners around Beijing instructed us to wear masks, avoid gathering and refrain from eating pangolins. Fear was pervasive, and suspicion of foreigners was high.

Life in Beijing got challenging once the pandemic hit

While their friends in the US were still enjoying normal pre-pandemic life, my boys were doing online school in a locked-down apartment complex in the Chinese capital. The government used health code apps on our phones to track us and control entrance to the few shops and restaurants that remained open. Security officers, thermal sensors, and I.D. checkpoints were everywhere. A positive Covid test meant immediate transfer to a government quarantine facility.

We survived those two years and returned to the US for my older son’s senior year. Just as I told him they would, the hard times (and the good times) made great fodder for his college essay, and he’s excited to be going off to one of his top-choice schools in August.

I know he’ll succeed because China prepared him well.

Before we moved, I watched my son huddle against the passenger door of our minivan and sob, his hoodie pulled up over his head like a protective cocoon. I had just picked him up from saying goodbye to his friends as we prepared to get on a plane to Beijing the next day. My heart broke for him, and I had no words of consolation to offer.

But at his new school, he quickly made friends, started a jazz band with some buddies, and helped the elementary kids learn STEM. He didn’t choose the situation we put him in, but he made the most of it.

When I asked him in the car recently how he was feeling about going away to college where he didn’t know anyone, he said, “I didn’t know anyone when we went to China. I’m not worried about it.” I breathed a sigh of relief.

My son learned coping mechanisms in a new culture

Before we moved, I worried about his tree nut allergy. Would he be vigilant enough to stay safe when I wasn’t around? As it turned out, I was the one who told him it was safe to eat the “hummus” at lunch one day in a Lebanese restaurant near our apartment. It turned out to be walnut dip, which all scared us. Not my best mom moment.

He was the one who quickly learned how to describe his allergy in Mandarin, making sure the dan dan mian was peanut-free before slurping up the spicy noodles. I’m sure he’ll manage in Boston.

What if he doesn’t like the food in the dining hall, you ask? Well, if he can eat donkey meat sandwiches and pork belly one day and a cheeseburger and fries the next, he’ll be fine.

Some parents might fret about how their child will navigate a large campus or find their way on public transportation in a new city. I’ve even heard of a mom who called the dean in a panic because her son had never crossed a street alone, and she wondered how he’d manage.

If my son can navigate his way around Beijing, he’ll be fine in Boston

Thanks to China, I won’t lose a minute of sleep on this one. My son maneuvered his way around the Chinese capital without blinking twice between the cryptic road signs, chaotic Beijing subway, and crazy ride-share drivers. He often rode in front as we biked through throngs of people and grabbed my arm to lead me across intersections when I became paralyzed by the traffic.

Then there’s the roommate lottery. We all hope our students end up rooming with someone compatible, but I think having an open mind to people from different backgrounds with diverse ideas helps in this one. Attending an international school with kids from over 50 different nationalities has given my son a bigger worldview.

What if he doesn’t like a certain professor, thinks a class is too hard, or isn’t prepared for the frigid Boston winters? What if he gets Covid and has to go to an isolation dorm? What if he feels sad because he misses me and the rest of our family? (Hey, let me dream, OK?)

There are so many challenges that lie ahead.

During our two years in China, I watched my son eat dishes with mysterious ingredients, learn to scuba dive in a trash-filled lake, and play soccer under pollution-filled skies. He missed his home, his friends, and Eggo waffles, but he kept going with grace and determination.

Thanks, China, for teaching my son grit. He’s ready for anything college might hand him.

Next year, I will practice letting go all over again as my younger son prepares to leave home. Maybe it will be harder because he’s the baby, and my nest will be empty. But I remind myself that he had the best teacher too. 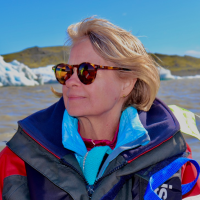 Kirsten Harrington is an Orlando-based freelance writer who loves to write about food and travel. She lived in China from 2019-2021 and still has many stories to tell. When she's not writing or planning out her next adventure with her husband, you might find her in the kitchen with her two sons.