We got a little snow last night and my oldest son told me before he left for school he would snow blow when he got home. I was going to ask him to do it anyway as it’s something he’s done around the house for a few years, even when his father lived here. But instead of me having to ask him (a few times over), he let me know he was going to do it.

My youngest son has taken to jumping out of his seat whenever he sees me struggling with something whether it’s opening a jar, bringing in groceries, or looking for a certain brand of lip gloss as we stroll through Target. 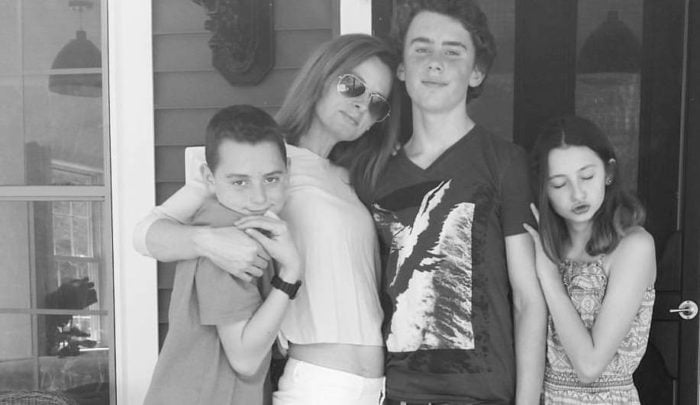 My sons have always been somewhat helpful, but they are still young boys who fail to be aware of those around them some of the time. But since their father has moved out, there has been a shift in their behavior towards me. It certainly didn’t happen overnight, but they have become more attentive to me, especially these past few months.

This is something that has happened organically overtime, without any prompting. And seeing my boys step up has made me feel proud of them, yes, but at the same time, I want them to continue going about their daily life and living in their childhood without worrying about me. I hate the thought of them carrying a burden or thinking I need constant tending to.

I want them to see me as an independent woman who can take care of herself, kids, home, and car on her own. But if I am being honest, if feels good to be seen. It feels good to watch my sons fall into a role of wanting to look out and care for someone else. There is validation in watching their behavior cater to our family dynamic because watching them be aware makes me feel like their father and I have done something right along the way.

My ex does remind them to help me out, to be good, to do their best, to try hard, just as I do. But we both want to be careful. The last thing we want to to make them feel as though they have to be the “men” of the house and it’s not easy to teach a good balance around the turn of events in our lives.

I want to instill in them we are going to do this thing together because that’s what family does, and this is not a responsibility that falls on their shoulders by any means. So, while I adore them for this, and appreciate their sentiment, I’ve had to keep them in check a little bit.

The other night as I was outside shoveling off the deck after a huge storm and my youngest son came out to join me. After an hour or so, he’d gotten so much snow in is boots, his ankles were raw and red. He didn’t say anything but I could tell he was uncomfortable so after watching him empty the snow from his boots a few times, I asked if he was OK.

After having a talk about it, he told me he hated seeing me out there alone. It kind of killed me and made me feel proud all at the same time.

It’s pretty amazing how people fall into different roles when life changes. This wasn’t anything I anticipated but it’s made me realize our kids are extremely aware and more capable than we sometimes give them credit for.

What Surprised Me About Parenting After My Divorce