As the crow flies, it’s 2,565 miles from my house in the suburbs of New York City to my daughter’s house in the San Francisco Bay area. At least, that’s what Google maps tells me. I know that geese and other species fly south and migrate to warmer climates, but I don’t know if crows fly from sea to shining sea. If they did, I’m quite sure it wouldn’t involve the hours it takes me to book a flight and decide on the trifecta of travel arrangements that include a convenient time, the best price and the right seat.

Certainly, crows don’t get stuck in traffic or delayed by mechanical problems. To be fair, though, I suppose any winged creature might need to take into account meteorological conditions- they may choose not to fly in a thunderstorm or a blizzard-but otherwise I’m guessing it’s just a get-up-and-go situation. Which, of course, it’s not for me.

And yet, a crow can’t fly 600mph and get from coast to coast in six hours. So perhaps I shouldn’t complain about a long flight in an enormous, winged mass of steel or compare it to the truly arduous journey a small feathered friend would need to endure to travel those 2,565 miles.

I have to travel almost 3,000 miles to see my daughter.

Nevertheless, here I am, bemoaning the hours on the road to and from the airport, the long security and boarding lines, the sprawling terminals with unruly masses of travelers that I voluntarily deal with every 6-8 weeks when I travel to visit my daughter. It used to be 3-4 times a year that I would make that journey; it was new and exciting at first, and remained so for at least a decade, until the newness wore off and reality set in.

We are an officially a bi-coastal family now. California was her choice. Twenty-two years ago, just after graduation from college, she sought refuge in the abundant, mythical sunshine of that state where her older brother had moved just a year earlier.

At twenty-two I had already been married for three years and was starting to plan a family. My mother lived eight blocks from me. We spoke on the phone daily and met often for lunch or shopping. I took for granted the proximity that afforded me those opportunities, never dreaming that one day I would not be doing the same with my own daughter. New York was my whole world. I didn’t know then how many miles a crow flies to California.

Both my children went to school close to home but then moved across the country.

Both my son and daughter went to school on the East Coast an easy drive from home. My husband and I thought that would eliminate any chance of their settling into their grown-up lives far away from us. But alas, we misjudged, and each headed west. It was a popular choice at the time; Silicon Valley had a magnetic pull on their generation.

Several of our friends also lost their children to the lure of freedom on the other side of the country. Some have since come home, others have not. My offspring split. After three years, my son came back to his roots and a job in the city. My daughter opted to stay and settle. And I have been checking flight schedules ever since.

On my last trip out there, my daughter’s babysitter asked me-in all innocence, I’m sure-whether I had ever thought my daughter would move so far away? I had to pause before I answered. I wondered what meaning it might have for this young girl just finishing college. Was she thinking in terms of her future? How important was it to her to stay tethered to the bonds that formed the foundation of her childhood?

My daughter has maintained strong family ties, but it has come at a cost-literally and figuratively. The airlines seem to be raising their prices every day. Phone calls need to be timed to accommodate the three-hour time difference. Visits are planned weeks in advance. Birthdays and holidays get missed. Spontaneity doesn’t exist. The garage door is stuck, “Dad, could you come over and fix it? Mom, I need to go to the grocery store and both kids are sleeping- can you babysit for an hour?” No, no, and no, indefinitely. And it gets even harder when a three year old grandchild pops up on FaceTime to tell me, “I want to go to your house…right now!”

I wonder who is missing out more-me or my daughter?

I often wonder who’s missing out more, me or my daughter? Sometimes she asks, “Do you resent me for moving away?” I always give the same answer. “No, I don’t resent you- that’s the wrong word. It just makes me feel angry and sad.”

Things could be different. My daughter grew up with the enduring presence and unbounded love of both sets of grandparents. They were an important part of her young life. She readily agrees how much she valued that. Who could have guessed she would spread her wings the width of the continent? I never expected my baby bird to leave our nest that empty. But it happened; opportunity knocked, adventure beckoned.

And so I go to sleep counting the days until I travel those 2,565 miles again. 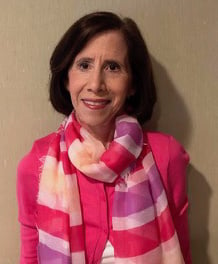 Deborah Levin is a Licensed Clinical Social Worker and writer. After graduation from Barnard College, she worked for a literary agency in NYC where her passion for reading and writing was nurtured. She raised a family and then pursued a Master’s degree in social work and started a private psychotherapy practice. Her work has been published in The New York Times, GRAND Magazine, the Journal of Analytic Social Work and Voices/Journal of the American Academy of Psychotherapists. She lives in Westchester county with her husband and lovable Labradoodle.

Home / Articles / Parenting / Empty Nest / My Daughter Moved Far Away: I Never Expected Her to Spread Her Wings This Wide
FacebookPinTweetEmail