When Lizzie left for college three and a half years ago, it felt like a part of me had disappeared, like an invisible umbilical cord had been severed. I’d spent eighteen years being needed, from changing tiny diapers to organizing birthday parties to shuttling a carload of teenagers to speech and debate tournaments.

I needed less in that decreasing linear graph of a child’s burgeoning adulthood each year. Lizzie adjusted more easily to college than I did to her absence — a switcharoo in separation anxiety.

Coping with my separation anxiety meant bonding with our dog

To cope with my separation anxiety, I took our seven-year-old dog, Wally, on long, lingering walks during work breaks and thought about how nothing in life is static. At home, Wally followed me around like I was a star and he, a benevolent groupie. I may no longer have had a human child that needed me, but I had Wally.

Then, in December, Wally contracted an incurable autoimmune disease. It happened so quickly that my husband, Jeff, and I didn’t have time to get used to the fact he was sick. Within a few days of his diagnosis, we said goodbye.

In a haze of tears and sadness, Jeff and I gave away everything that reminded us of Wally: a newly opened 28-pound bag of food to a rescue dog organization, his bed, and toys to our neighbor’s new puppy. A week later, I found a forgotten plastic bone under the sofa as I was vacuuming. I held it to my chest and sobbed.

I told Jeff I never wanted another dog — losing them was too hard. Jeff reassured me of all the good things being dog-free meant. We were now empty nesters — we could travel without a sitter or guilt. Think of the money we’d save money on vet bills and food. No more walks in the freezing rain. We were desperately searching for a silver lining, anything that would slap an emotional bandaid over our sadness.

When the dog died, his loss caused unremitting heartache

But the heartache remained. I fiercely missed Wally puddled at my feet as I worked. Jeff longed for the pogo stick of fur that greeted us each time we returned home, whether we were gone for a quick walk to the hardware store or away for hours.

I missed the click click click his toenails made on the hardwood floor and the way his rear vibrated when he wagged his tail hard. And we both missed his unbridled optimism — each night at dinner, he stared at the place on the carpet where, in sixth grade, Lizzie had dropped a piece of salmon as if convinced another would one day materialize. It never did.

One morning I walked into Jeff’s office and found him on his computer, staring at photos of dogs.

When we took our evening walks, I looked longingly at dogs like I had with babies many years earlier when I knew I wanted to become a parent.

We couldn’t replace Wally, but we needed a dog

So three months later, we found ourselves surrounded by golden retriever puppies. No one could replace Wally, we told each other. We weren’t trying to replace him, but our house was too empty. For us, a house with both a grown child and no dog was only a house, not a home.

Puppies are fluff balls of condensed joy. I believe we could achieve world peace if we gave each country’s leader a puppy.

And thus, Flossie the puppy came into our lives.

Since Lizzie was four when Jeff and I met and six when we married, we never parented a toddler together. We’d also never raised a puppy together — our previous dogs had been older rescues.

Having a puppy was like having a toddler again, but one with tiny, razor-sharp teeth and an obsession with socks. After tossing yet another chewed-up sock in the trash, I wondered if I was too old for this. Had we made a mistake?

Though we occasionally bickered about what was developmentally appropriate for puppies, Jeff and I agreed about Flossie (as we had been raising Lizzie.) It turns out that parenting a puppy was quite similar to a young child.

Raising a new puppy was like parenting a toddler

Each time Flossie hit a new milestone, I felt the same sense of pride I’d felt with Lizzie. When Flossie held out a paw on command, my heart swelled as it had when Lizzie stood on wobbly legs for the first time.

Jeff and I praised her the first time Flossie slept through the night. It was like the positive reinforcement I’d used with three-year-old Lizzie when she put away her toys without being asked. Of course, Lizzie could understand what I was saying. Secretly, I was convinced Flossie could, too.

Jeff and I took Flossie to puppy socialization class, where we sat in a circle with the dog parents, all with wiggly puppies in front of us. It was like the Mommy and Me classes but with dog treats instead of organic strawberries in bite-sized chunks. When we overheard one younger couple telling the instructor their puppy didn’t want to be in a group with Flossie, Jeff and I glanced at each other and frowned. I whispered to him that their dog was such a baby.

Flossie was enthusiastic, yes, but sweet and lovable. The instructor rolled her eyes. The next week, when a pup parent smiled and told me how well our puppies played together, I looked over to see if the other dog’s parents had heard. They had. I smirked. Parenting a puppy had turned me into the type of parent I’d always hated: judgmental and competitive. And yet I now secretly relished it.

Over that first year, Flossie morphed from puppy/toddler to dog. She grew into a good girl who enjoyed being told so.

Now I take long, lingering walks with Flossie. She dutifully listens as I complain about a work stumble or a petty argument with Jeff about toilet paper rolls. Flossie never complains. She just wags her tail enthusiastically and sits patiently for a dog biscuit.

And, although Flossie hasn’t learned to clean her muddy footprints off the kitchen floor or place her shedded clumps of fur in the garbage bin, she also never leaves a pile of clothes in her room or dishes in the sink. Our house feels like a home again. But I will have a hard time if Flossie leaves for college. 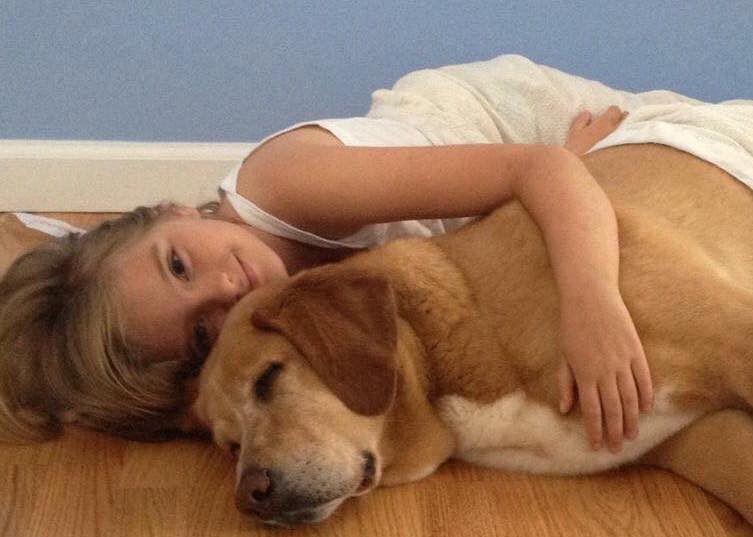