At the end of this summer, my youngest daughter will be going to college, and I can’t help feeling that I’m being left behind.

I remember the first time I felt like I’d been left. I was six, in the first grade, and had the most wonderful teacher in the world. Her name was Miss Lindley and she was beautiful, at least in my six-year-old eyes. She taught us songs and games and led a wonderful version of show and tell, and we all loved her. On my birthday, we had cupcakes and she even wrote on my autograph animal, a stuffed pink dachshund, her name in her steady teacher handwriting with a big heart next to it.

Then one day, without any warning, she announced to the class that she would be leaving. She was getting married and moving away with her new husband. The tears flowed, and I felt brokenhearted, knowing that things would never be the same.

And they weren’t. But the world went on anyway.

We learned to write and spell, practiced our math facts, and had a different way to do show and tell. Some things were better and some weren’t as good, but from that point on, I knew that people could leave.

Over the course of my lifetime, I’ve had a long list of people leave—teachers and co-workers and neighbors and friends. Being left behind feels awful, and even though now I know that people move away for good reasons, for good things in their own lives, I still can’t help feeling a pang of that same sadness I felt for Miss Lindley.

When my oldest daughter left for college, I thought I was prepared. I put on a brave face when we dropped her off, exclaiming over her tiny dorm room and her newfound friends, but once we got back home, that empty room in our house got me every time. I couldn’t walk by it without feeling the tears, that tight feeling in my throat. She wasn’t far away, only about an hour and a half drive, and we saw each other quite a bit that first year, which helped.

But as time went on, her visits and phone calls home became less frequent. As she got used to it, I had to, too. It took a while, but it did get easier, and I could finally walk past her open door without crying. But every time she drove away, there was that little pang of loss all over again.

I can’t decide if it helps or makes it worse to have gone through it before.

I know I will survive, but that feeling of heartbreak is real. Her room will be empty. It will hurt to walk by it, even though I won’t have to nag her to put away her clothes or make her bed anymore. I won’t get to hear about her day as she comes in with that overstuffed backpack, unloading her books and telling stories about what crazy things happened— her teachers and friends and that boy in Spanish class who always gets in trouble. She’ll text, hopefully, and maybe sometimes call or FaceTime, but it will never be exactly the same again.

And although I hate to admit it, that is a good thing. I have a friend, a very wise friend, who says, “Love what comes, love what goes.” That sounds easier in theory than in practice, but I’ve been thinking about it a lot lately. It’s about living in this moment, right now, while at the same time being grateful for those moments that came before and those that will come afterwards.

And I think that might be it. I am so grateful for her coming into my life eighteen years ago, for all the love she has taught me to feel. It will be different to learn how to love her from a distance of over 1,000 miles, but I know that as she goes out into the world, she will carry that love forward in all that she does.

She will learn new things and meet new people and have a chance to experience all that life has to offer, on her own terms and in her own way. And even though she’s leaving, it’s not that I’m being left behind.

The 40 Thoughts All Moms Have At College Drop Off 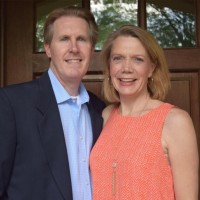