As the deadline looms, I feel my anxiety level rise. If the heat of my pulse is any indicator, I seem to be approaching boiling point. My son has pretty much everything left to do on his college applications, and I tell him so.

“Everything?” he says, sneering. “What are you even talking about?”

Well, since he asked, I decide to remind him. Again. “You still have to write three supplementary essays, finish your Common Application essay, edit some of those questions, tweak your resume, upload it all.

[More on What Happens To Your Heart After You Submit Your College Application here.]

“Upload it?” he says. “That takes like two seconds.”

“My wish,” I tell my friend who also has a child in the deep end of senior year, “is not to stop caring, but to care less.”

She nods knowingly. “To trust the process without trying to control it.”

“Yes, that’s it” I say, coming to a slow realization as we sometimes do in conversation with wise friends. I want to trust the process, though not necessarily the college-as-business- process that has created school classrooms based more on metrics than creativity, boatloads of anxiety for our teens, and, too often, family civil wars, with parents and children in a stand-off on opposite sides of slammed doors.

Rather, I’m talking about trusting my son’s process of deciding what he wants and going for it—at his pace—without me prodding and pleading and pointing at the calendar. I’m tired of standing in the hallway, hoping he’s in that room actually finishing that essay. I’m tired of caring more than he does about his college applications.

Because, really, as long as I care more than he does, he won’t learn what it means to work tirelessly for something and get it, or not. He won’t know what goes into a major decision that involves hours of focused writing, time management, and inflexible deadlines. He won’t appreciate the investment and, therefore, the outcome will mean less, too.

I can’t get my son into college. He has to get himself in, while I stand back and pray my prayer: Let me care less.

But how? How do I let go and trust when it feels like there’s so much at stake (including his future and our life savings) in the college decision? When those of us who have been in the work force for decades know how long it takes to complete a task well, and that the answer is way longer than you think, sometimes by weeks? How do we stop wanting something for our kids more than they seem to want it for themselves?

[More on how to let your children lead the college application process here.]

As a mother, all I thought I had to do was care with all my heart, and to love my son even in those rebellious teenage moments when he couldn’t exactly tell he loved me. How am I supposed to pull back now, at this crucial juncture, when this first most life-changing process he has to undertake is just that, one for him, not me, to take on?

Cue: Screams of frustration, followed by that prayer.

My friends and I joke about our handwritten applications to a few colleges chosen with all the thought one might give to playing the Dictionary Game at a dinner party. Flip open the Barron’s guide and see where your finger landed. I remember writing a first draft of my essay directly onto the application form. When I made a mistake, I dabbed on some White-Out. I remember our guidance secretary not getting a key application out by the deadline. She waved me off. “We’ll just mail it next week.”

Beyond the unreasonable culture of competition in our society, I think parents today are responding to their own nonchalance from years ago, often with regret. Listen to how we talk about what we didn’t do, where we didn’t go to school, the subtext being that our kids will do better? Or, if we went to competitive colleges, we are convinced that choice was essential to our success. We have come to equate our children’s chance of doing well in the world with the college they go to, and we want more than anything to help them get into that good one, as if that will somehow guarantee them a good life, too.

When my son finally asks me to look at his essay (because I threatened him that he had to) my fingers twitch as I want to fix it all. Instead I say, “Hmm. You might want to rethink that introduction.”

Last year I ran into a friend who knew we were heading into the college application process just as she was emerging from it—her war wounds still raw. “I wouldn’t wish senior year on my worst enemy,” she huffed. Then she patted my shoulder and said, “But you’ll get through it.”

Of course I’ll get through it. My son will, too. He’ll also do some growing up in the process. And next year at this time, he’ll be in the middle of mid-term exams at some college somewhere. Hopefully he’ll also be happy, taking engaging classes, making lifelong friends, and feeling decently satisfied with his choice. How he gets to that place must be up to him. It must be his work, his time, and fully his process.

As for where that place is, well, you know how I feel. I really couldn’t care less.

7 Things to Say After Your Teen Submits a College Application

The Problem With Your Kid’s Dream School Sandra A. Miller’s essays and articles have appeared in over 100 publications, including Modern Bride, Spirituality & Health, and the Boston Sunday Globe Magazine. One of her personal essays was turned into short film called “Wait” starring Kerry Washington. You can find out more at SandraAMiller.com or where she blogs, at Nightmath. 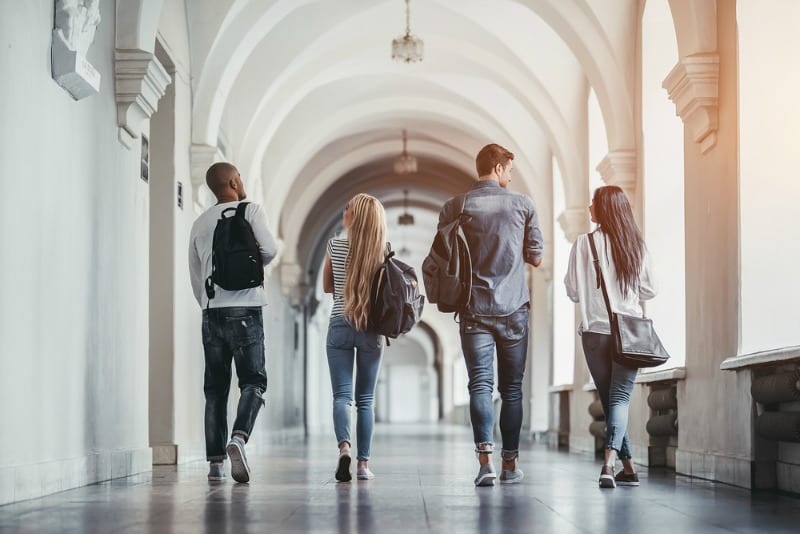 Advice On Selecting A College From College President (and Dad)

The college admission process can be daunting. Here are some ideas from a college president — and a parent who has been through it twice — on the ways parents can help with the final college selection. Let me start with a simple observation. You can get a great education at a wide range of colleges…

Former College Dean: What Students Should Look for in a College

Several years ago, picking my middle-school-aged son up from a New Year’s Eve party, I found myself merrily but awkwardly ringing in the new year with acquaintances. One mother, who knew that I was the provost of a liberal arts college, made her way over. Champagne in one hand, she took my arm with the…

It’s crunch time for college applications and just like every other part of a high school student’s life, applying to college has been drastically impacted by COVID.  Members of the class of 2024, making their final college choices as the pandemic swept across the country, responded in different ways. Many went ahead with their original…