I take voting very seriously and, other than a decade living overseas, never miss an opportunity to jump into a voting booth. Throughout my three kid’s lives I took them into the booth with me. The four of us would squish in together and each of them would get a chance to punch the card registering my vote.

We would take turns deciding who got to vote for President and Senator and who was left with the more minor offices. As the booth was merely a curtain, I could hear the nice old ladies who checked my name laughing at the inevitable sibling battle going on about who got to vote for what. But I thought the fights were worth it. Modeling is the best form of parenting and I believed I was modeling my civic duty. I was pretty sure I was doing this right. 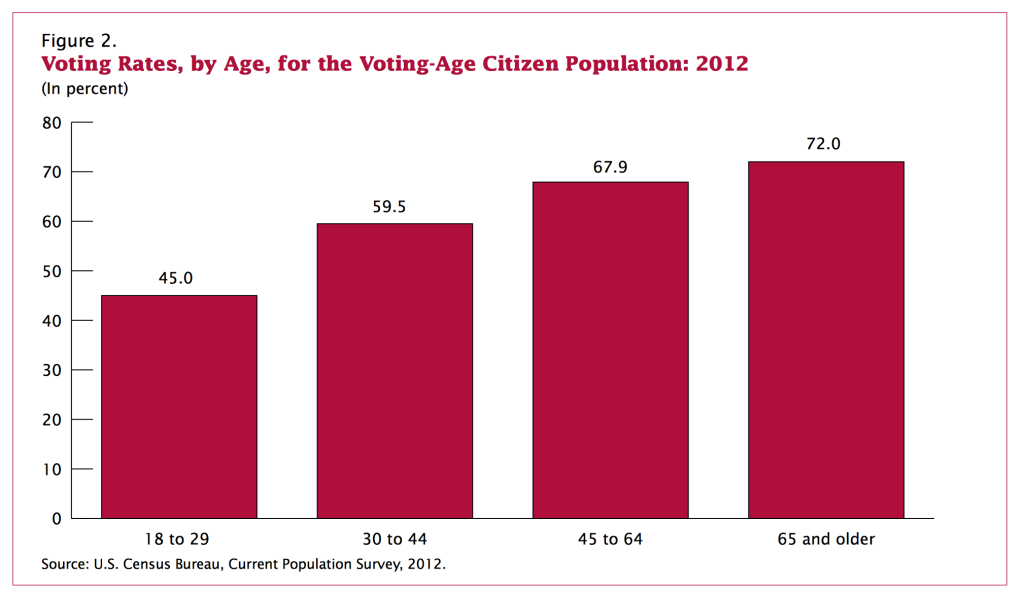 Fast forward. My three sons, now young adults, don’t vote and are not even registered. This does not make me happy and I have not given up hope or nagging. My kids are emblematic of a generation that does not value the voting booth. As the chart shows above, less than half of their demographic votes and when the numbers are further dissected, the voting rates for the youngest voters, 18-24 year olds, are even lower.

Why Don’t Young Adults Vote and What Can We Do About It?

1. Young Adults Move Over and Over

Voting is so 20th century. I don’t know about your kids but mine rarely hold a pencil or touch paper. If it isn’t online they don’t want to know. Voting has changed very little in the digital age and can seem hopelessly outdated to our kids.

They are disaffected. Unlike the highly politicised world we grew up in, with anti-war demonstrations and civil rights marches, their lives have been dominated by political gridlock, widespread distrust for politicians and the overwhelming belief that those who serve our country are really trying to serve themselves. These things may or may not be true, but studies show that these beliefs are widely held among young voters and nonvoters. Last year a Harvard Study found that 58% of young adults agreed with the statement, “elected officials do not have the same priorities that I do” and 62% believe that “elected officials seem to be motivated by selfish reasons.”

The overwhelming reason that young people vote in smaller numbers is that they are not working, not married and not in possession of a mortgage to the same extent as their parents. Without an economic stake in today, in mortgage rates, tax rates, IRAs and employment rates, they simply do not have the same focus on economic policy as they will one day.

So while my kids, and maybe yours, are passing up on their civic responsibility, the hard-won right to vote, I have not given up hope. Each step they take further into their adult lives, be it marriage, job or home ownership will take them one step closer to the polling booth.