I sat on my bed, pen at the ready, trying to think of something to write that hadn’t been said in random texts and snapchats that week. When I was in college, I loved getting mail. It changed the energy of the day, the voice on the paper coming from afar. I still have them, tucked away in a basement box. I don’t even need to read the letters to know who wrote them; the shapes of the letters are enough. Time was running out for me to give this experience to my kids; one them was already in his last year of college. These other replacements had stopped me from taking the time to write – was there anything left to say? I felt a little shy. Tongue tied, even. My kids probably didn’t even check their boxes daily – or even at all – unless they themselves had forgotten things and had requested shipment; they would ask if it had been sent, and when I said “yes” they knew something was coming. The only element of surprise would be if I had taken the time to tuck some favorite candy into the box as well. It elicited “thank you” texts, a personal shipment confirmation.

My writer’s block went on for a while as I leafed through a random pile of blank notecards that were in no particular order. I found some unused Monet postcards and wrote little comments on the back. They felt less intimidating, there was not as much space. Maybe they would like the art on the front.  At least it would be mail.

On the second and third nights, I sat there again, still determined. I had sorted the cards and they were now in order. I didn’t remember buying so many cards with painted birds on the front. My husband glanced over at me, puzzled by my change in behavior, “you are writing to them again?” I don’t think he noticed that I was mostly only thinking with a pen hanging in limbo over paper. But it was a shift from my usual going to bed routine with my phone in my hand as I read the news before drifting off. It was a bad habit that was starting to grate on my nerves. I wanted to do something meaningful.

I noticed an orphan index card accidentally left between the birds. It reminded me of my recipe box. With nothing else coming to mind, I decided to scribble down an old recipe I knew by heart. At least it was something to send. It would be for my kid who now had a kitchen in his little apartment. But it didn’t solve the dilemma of what to send the other one, the senior, the one who lived in the dorm. The one I knew really liked mail.  I set down my pen as my very practical third son came into the room and saw me sitting there amidst the card pile. He wondered out loud about the cost of stamps. Did I know that whatever I was going to say could be said for free in an email? It gave me pause and raised the stakes. What words were worth a stamp? What was note-worthy?

Leaning over to my bedside table, I instead decide to finish reading Anthony Doerr’s All the Light We Cannot See

. I stop at the sentence he describes about time, comparing it to a “glowing puddle you carry in your hands.” He goes on to write that we should be “working so hard not to spill one single drop.” I read it several times over, thinking about my own ‘puddle’ of time I hold; how much water had I let slip away? Images flashed through my mind of surfing the internet, my time spent procrastinating, idleness. What sort of things make for a waste of time? Me sitting there wondering what to write, for instance?  I thought about Doerr’s character Jutta who waited for letters that rarely came from her brother after he left their orphanage.

I pushed the covers off and climbed out of bed. I headed to the basement for Roald Dahl’s book Boy: Tales of Childhood

. I had read it to both my older boys when they were small; it was a favorite of theirs. With the night growing late, I decided I was going to choose an excerpt from one of his tales and send it in my note. I bet they would love reading pieces of it again. I decided to make it a little game, leaving off any obvious details.  Would they be able to identify the writer’s voice? The name of the childhood book? Maybe I would make it into a trivia contest between them. Maybe it would spur memories of things they thought about when they were small. At the very least, Roald Dahl was worth a stamp.

It sent me back in time, rereading parts of that book. I had totally forgotten about the time he had put a dead mouse in the candy jar at the local store and when he had his adenoids plucked out without anesthesia. I called into my twelve-year old’s room, realizing I had never read it to him. The youngest often miss out. I went in with the book and curled up with him, the words sinking into me like a favorite blanket.

My mission continued. Over the next few days, I found myself in the basement searching for more passages to send. The childhood books my boys had loved were tattered and worn, so they were easy to find. I started remembering the lives of all these characters that had grabbed their attention and pushed their intellects (and my own); so many plots and themes that fueled their thoughts years and years ago. Were these the building blocks for who they became? Did they even recall the specifics of these influences? I often forgot my own.

As I fell deeper into my project, I decided to add photos to the excerpts I was sending. I used a postcard service, Touchnote, that allowed me to easily upload my pictures. It became a game for me as well, searching for just the right picture from years ago that would provide a clue to the identity of the passages I sent. I found a photo of my older boys chasing a rocket they had built and matched it with a quote from Homer Hickham’s book Rocket Boys

the inspiration for one of our favorite family movies, October Sky.

[More on great movies to watch with teens and college kids here.]

I imagine someday in the future a little scrapbook of sorts in their cabinets. Something more than an album of pictures that show only the exterior. Possibly these words from treasured authors will inform dilemmas they face. Maybe they will be a spark for other conversations; ones that are richer in substance than my texts and nagging reminders. Maybe these passages will transport them back into the stories they loved. I imagine them, for just a moment, looking once more through the fantastical lens of childhood, when anything is possible. Maybe it will keep alive their original kernels of wonder. Or maybe they will just enjoy the words. I think it will be worth the time.

How to Stay Close to Your Family as Grown Apart 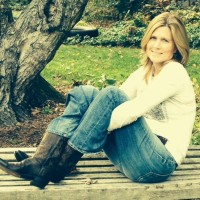 Megan Houston Sager, formerly a teacher and knitting shop owner, currently raises boys, dogs, chickens, vegetables and one aggravated cat. She spends her time searching for words that piece together the puzzles in her head. And also cooking dinner. Her work has appeared on scarymommy.com and on her blog, herchickendiary.blogspot.com