A few days ago, I was stuck in traffic on a long drive with my oldest son who is twenty-six and we started talking about mothers. His mother, my mother, and mothers in general. I know that my sons find me annoying at times and I accept that it goes with the mom territory.

But my son wanted me to know that it’s really not just me. So, since he is a person who likes visual aids, he explained it this way: 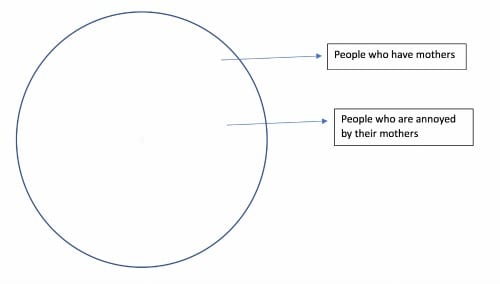 Now that we have established that all people get annoyed by their mothers, the big question is why?

My son said that he thinks that the number one reason people find their moms annoying is because we meddle. Speaking for himself (and apparently every person who has ever had a mother), he expounded on his theory by saying: “You didn’t trust me to do things but you should have because I never went so far off the path.” He concluded with the following statement, which he delivered a little triumphantly: “At this point I’m out of your reach.”

I heard my son out and, having a mother of my own, I didn’t completely disagree with him but I found a few significant flaws with his analysis. Contrary to his belief, parenting IS about meddling. While my son suggested that “strategic meddling” is the best tactic, when you’re a parent THERE IS NO SUCH THING.

If they screw up, we know they are going to blame us and we are going to blame ourselves. How are we supposed to know if they are going to stray far off the path? There were times I was fairly certain my kids didn’t even know where the path was. So, I believe it’s best to err on the side of over-meddling. And as for being out of my reach, I will allow my dear son to think what he wants but it’s just not so. My super power is my influence, which reaches far and wide, probably even from beyond the grave.

Once I ascertained why my own child found me annoying, I became curious as to why others find their mothers annoying. I posed the question to several people I know. And everyone I spoke with was more than happy to throw their mom under the bus. Even my mother, who revered my grandmother and never ever said a bad word about her, admitted that her mom could be stubborn and recounted a battle of wills between them over shoes.

My nephew said another reason moms can be annoying is their lack of filter. When asked for an example he cited a recent instance when he told his mother where his new apartment was located and she blurted out “Isn’t that where a murder occurred not too long ago?” When it comes to our children, our concern sometimes gets in the way of our best behavior. We have no time to pussyfoot around, so we just put it out there. That’s the thing about the mother/child relationship—you don’t always have to be polite.

My nephew’s girlfriend was eager to join in the conversation and added that dealing with parents and technology can be really annoying. And frustrating. Which I also understand—I get irritated by my own relationship with technology, so I can see how it could irritate my kids. (By the way, my youngest son helped me with that diagram above.)

Someone else told me that her mother thinks she knows everything. Well, duh. We have a whole lot more life experience than our kids (except for that technology thing) and who better to share all that knowledge with than our children? And even if we don’t know everything, we want to arm them with as much information as possible. Which is why we send them article after article even though, as my son once pointed out, they rarely read them.

I know that no matter how much I annoy my sons, they will always love me. I also know that as long as there are mothers and children, the circle of annoyance will continue.

What This Mom Learned About Grown Sons May Surprise You

Older Brother to Little Brother: 5 Things You Need to Know