It has been a long four months away. My firstborn is home tonight from his first semester at college, and I can’t stop smiling. I sing a song as I gather up the dinner dishes in the sink, and I hear the washer groan from his weeks-long laundry finally being done. My son has opened and closed the refrigerator door enough times tonight that I think we’ll burn through a light bulb. “Mom, there’s so much good stuff in here!” he says, laughing. This is no accident, I’ve run to the store twice today to make sure all of his favorites are here waiting for him.

My son is good, he looks healthy and happy, and he comes alive when he talks of life on campus. I listen to his voice fill the kitchen, and his laugh grips my heart so hard I forget to breathe.

I have missed him. Our entire family sits around him, asking our questions. His father asks him about classes and grades. The younger brothers want to know what the dorms are like. I think of how what I want to ask would leave him rolling his eyes. “Are you sleeping enough? Is the food good? Did you take your warm sweater? Socks, what about socks?”

Just a week ago, he wasn’t here. And he changes so much that is our life around here when he’s home. The yogurt no longer turns sour because he’s home, the orange juice doesn’t go tart, and the bananas won’t turn brown for the same reason. I still buy too much at the store, even after four months of him being gone away to school, I still haven’t been able to adjust to shopping for a household that doesn’t hold him in it.

It’s been a good first semester away from home for him. School is everything he hoped it would be. Later, when he passes a mirror, he tells me he’s been eating less starch and more protein, and don’t I think this looks good on him? I stop myself from saying how easy it is to look good when you’re 19. He’s solid, strong, proud, and hugging him feels like you’re encircling a tree. When I ask how he’s feeling, he says great. He adds that he’s working hard, too, and meeting the coolest people. His mood is bright and his eyes dance with the details of his new life on his own.

Once, years ago, I had a hint of what this part of his life, one without me, would be like. It was when he had just started kindergarten and was still so little, to my eyes. But when I picked him up after four hours solo, he was unstoppable bubbling over with news of projects, books, and what the teacher had taught him that day. His joy was on his face, but my realizing his life was now going to contain parts without me struck me cold and hard. Until then, I had never believed what the sweet old ladies had whispered to me in store lines all these years, “The time goes so fast!”

Time does rush past. It doesn’t seem like we are part of the years that we’re in, but when we look around us, we see the souvenirs from along the way. In the bathroom upstairs, I see the foot stool I painted green for him because he couldn’t reach the sink. How is it that it still occupies the same corner—as if it will ever go back to its original purpose?

Later that night, I wait until we have time alone to ask him where he gets his hair cut, and if it felt strange the first night he wasn’t home?

I have so many questions.

“Are your boots warm enough?”

“Do you use a buddy system when you go out? Never mind, just say yes.”

“Why don’t I ever see pictures of you with a hat on? Do you need another one?”

Things are different for all of us now. The duffel bag on the floor of his room reminds me whenever I walk past that this is a visit. I ponder that, my child visiting.

I watch my son as he talks about the life he has now, the one that’s his. I am amazed at how well I take it. I was always certain, a million-dollar-bet certain, that when he left, I would be lost. I pictured myself walking in circles, befuddled, needing to learn a new way to live with one of my children gone. Instead, I find myself thrilled for him, relieved that he’s adapted, grateful that he is happy. I feel all of these things at the same time as I feel the lump that rises in my throat.

He’s home, but not in the same way he was home his first 18 years with us, and I am OK. I marvel at this power of love that is so strong for someone else that it is able to override what I thought I would one day feel when he was gone. I am not lost. What I feel now is not what I feared it would be.

Tonight, my child is home, and it so good to have the miles disappear.

Watching Your Son Fall in Love is No Easy Task 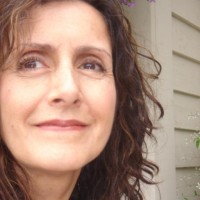 Alexandra Rosas is Co-Producer of the Listen To Your Mother Show/Milwaukee. A first-generation American who writes cultural memoir and humor, Alexandra performs as a national storyteller with The Moth and was the 2013 Milwaukee Moth Grand StorySLAM champion.

She has been named a BlogHer Voice of the Year four years running and has been published in several anthologies. She is a regular contributor to Milwaukee Public Radio, Huffington Post, Purple Clover, and was recently named the National Gold Award recipient by Parenting Media Association for her MetroParent Milwaukee column, MomLogic. A Babble Top 100 Mom Blogger and featured on TodayParents as one of 2015’s Funniest Parents on Facebook, you can follow Alexandra on Facebook, her blog Good Day, Regular People, or twitter. She lives with her family in Cedarburg, Wisconsin.