My eldest son has returned home from a five-week band tour of 26 cities and 30 shows. He zigged across America to New York City in his black van crammed with band members, zagged back to LA, and then zoomed up the west coast to Canada. In the pictures I saw on Facebook, he grew a fuzzy beard and appeared to wear the same slowly deteriorating sleeveless t-shirt for several weeks at a time.

He is now 21 years old, and is supposed to be in his third year of college. He is supposed to be living in a decent walk-up apartment near campus, climbing on a bus every day and dutifully attending his classes. Then he is supposed to graduate with a general degree that leads him to practical, but soulless jobs through his 20’s, before settling into a career.

He is supposed to do that because that’s exactly what I did.

He has decent high school grades, a scholarship, and parents who diligently saved for his tuition. Instead, he has chosen the life of a drummer, complete with grit, adventure and bonus life experience. This boy has ventured very far from his mother’s comfort zone.

My son is an alien to my friends

He’s an alien to my friends, whose adult children are doing what they are supposed to do. I’ve lost count of the blank looks and the abrupt changes in conversation that I’ve endured when they discover he’s not in college.

I’m wondering, though: aren’t I a member of an underground group of parents, whose children are taking a different, non-college path in life? Aren’t there kids out there who don’t have the grades, financial support, or will to go to post-secondary? And isn’t that ok too?

My son has never done what he’s supposed to do. He was a willful child, right from birth, and always had a very clear sense of who he is. He is a punk rock musician, not a college student, and these two things are mutually exclusive.

He’s currently in between tours, so he’s living in the back of his van, sleeping on a futon mattress shoved between the seats. He’s parked in a friend’s alley, and uses their kitchen and bathroom for a weekly fee. I’ve have pleaded with him to move back home. But he firmly shakes his head, steadfast and resolute.

When he was 14 and had a dyed red faux-hawk, he used to tease me and say that when he grew up he wanted to live in a van by the side of the river.

I realize now that he wasn’t kidding.

I pick him up for our lunch date at a prescribed street corner. I’m happy to see you, I say, as he folds himself into the car. He turns to me and a wide grin spreads across his face, I’m happy to see you too, Mom, he says. He’s relaxed, tanned, and in wiry shape. His little brother Aaron is with us, and he’s greeted with a rousing ‘Hey Goose’ and a high-five. There’s some friendly razzing, arm punching and an impromptu burping contest.

“Let’s do Indian food,”  my eldest suggests and we are off to an all-you-can-eat buffet, where we happily tuck in plates of garlic naan, vegetable pakora, dal and chickpea curry. He and Aaron slurp mango juice and wrestle in the restaurant booth.

“How was your tour?” I ask, not able to fathom a road trip of such epic proportions. He’s 25 years my junior and has travelled to more American cities that I can ever hope to see in my lifetime. His eyes are brightly shining – “It was pretty consistently exciting,” he says.

Most of us live our lives small, and in fear – all in the name of being comfortable and stable. My son has not taken that route. He lives life large and out loud. He’s worked steadily at a job since he was 15, saving money to buy drum sticks, a dilapidated van and gas money to go on tour. He works to tour. He’s the most ambitious and resourceful person I know. He is unapologetic about doing what he loves, and he lives free from fear of judgment. I’m beginning to realize that fear of judgment is what keeps the rest of us small.

After our lunch, I drop the two brothers at a movie. My eldest, 6’2″, ambles beside tiny Aaron. They have a pocketful of change to play video games. My musician son has his arm draped casually across his youngest brother’s shoulder. My tears well up seeing this tender gesture, and afterwards, I sit in the car for a long time. I have one adult son – wild, unencumbered and resistant to authority. My youngest son, born with an extra chromosome, is persistent and full of life.

Here I am, a suburban mom, closing in on fifty, and I’m learning life lessons from my young, diverse sons. Here’s what they’ve taught me – they nudge me subtly and gently towards this question, as they ask: Mom, what would you do if you weren’t afraid?

Stop Judging and Try Compassion, Instead 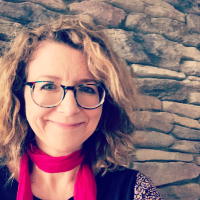 Sue Robins is a writer, speaker and mother of three. She's passionate about motherhood, kids with differences, storytelling and nurturing kindness & compassion in the health care & education systems. She blogs at: www.suerobins.com. As a college senior, I thought I would have everything figured out by now, graduating with a full-time job and living in a new apartment in a new place, getting a fresh start after graduation.  However, life doesn’t always go exactly as planned, and many of the things I anticipated for my twenties are not…