I had two very good reasons for crouching beside the main table at my sister’s wedding; my parents could not see what I was doing and I needed more alcohol.

The dance floor stretched out behind me, but people weren’t dancing anymore. I reached up to grab the wine glasses left by other guests and quickly downed whatever remained in them. The bar had closed at 11pm and I could not allow the feeling I had to wear off. I had been having a grand old-time flirting with the valet, riding around in the golf cart, and dancing.

Plus, I’m an alcoholic which means that once I start, I can’t stop.

By the end of my high school career, people would offer me platitudes, “You just need to learn how to drink,” they would say. Or “you just need to find your limit.” What they didn’t understand at the time, and what I had struggled to understand since my first drink at age 12, was that I couldn’t learn how to drink, nor did I have a limit. I didn’t want a limit. I found it ludicrous to just have one drink or one puff or one pill.

All I really wanted was to stop hurting people or scaring them with my substance use. I wanted to stop going to the hospital for alcohol poisoning, stop coming home drunk with my shirt on backwards, stop running away from my friends blackout drunk in New York City. I didn’t want my parents to find drugs in my purse. I didn’t want to dump friends because they didn’t support my drinking or to miss getting ready for the prom with friends because I had to pick up drugs. I didn’t want mom to have to rescue me after I got pulled over without a license and past curfew

I could go on but you get the picture. The desire to numb myself with drugs and alcohol seeped into everything. I chose my friends and boyfriends based on who wanted to do what I wanted to do and I refused to form relationships with my family because I couldn’t waste my time on them. The anxiety created by my bad behavior led me to make poor decisions, even while sober. I acted out aggressively toward my parents and boyfriends and I turned down job, educational and relationship opportunities because I was so afraid of failing.

Freshman year of college, I got into trouble. Two months into the first semester I was forced to see a drug and alcohol counselor. At the same time, I was seeing a therapist recommended through the university for my anxiety and depression. My parents came to visit me and the only person I introduced them to was a very skinny boyfriend. My mom sobbed and I couldn’t wait for her to leave so I could use drugs.

The drug and alcohol counselor told me to try a twelve-step program. I brushed her off. Then, at the beginning of the second semester, I woke up in a hospital in one of the worst parts of Boston. I had no memory of how I had ended up there. I thought I had lost everything. There had been a massive snow storm and the taxi I took home from the hospital hit a curb and had to drop me off at a nearby train station. I rode the T an hour home with hospital pants on.

My therapist told me that if I didn’t stop drinking, she couldn’t continue seeing me. I came to her office every single week and told her how badly I wanted to kill myself. I didn’t know what to do. I tried my first twelve-step meeting in January 2014. My sister’s wedding was in July of 2014.

So, I’m crouched behind a table drinking the remains of other people’s alcoholic beverages. At the beginning of the night someone had handed me a glass of champagne and I drank it without a thought to sobriety or to the consequences of my drinking. By the end of the night, I blacked out. My last memory of that night was me doing accents on the shuttle back to the hotel.

I had been going to twelve step meetings for several months and learning about alcoholism and the twelve steps but I hadn’t done any real work on myself yet. All I had done was admit to my parents that I had a problem. I imagine that it was both a relief and a heartbreak for them. My parents didn’t say a word to me that night. That night I needed to have my own experience. Not only did I always get angry when people tried to stop me from drinking, but I would feel the shame and remorse with twice the force the next morning without anyone pointing it out for me.

“Are you okay?” My dad asked. He had come into my room to check on me, still not mentioning the drinking. I grunted. “I’m going to take a shower,” I told him, mostly so he would leave because I was so embarrassed. He did. I was too hung over to stand up in the shower so I lay in the bath, absolutely miserable. I didn’t believe in a God but the twelve step program had introduced me to the concept so I opened my mouth and I said, “God, please help me.”

My experience is not completely typical, if there is such a thing. I believe that the universe confronted me with the fact that I could not fix myself. I needed outside help. That day a miracle happened to me, and I stopped drinking.

There are times to speak up and there are times to be silent. I hope that anybody struggling with a substance abuse issue, or trying to help someone who is, can trust their gut to navigate these issues. I’m so grateful that my parents and my friends, in the wisdom they didn’t even know they had, knew when to be silent and when to speak up.

Now That You Are 21, Here Are 6 Things To Remember About Drinking

Home / Articles / Young Adults / Adulting / I Got Drunk At My Sister’s Wedding, That Was The Last Time I Drank
FacebookPinTweetEmail 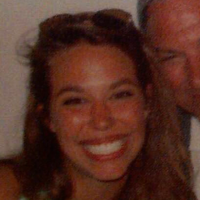 Victoria Kiarsis is a graduate of Emerson College where she studied Writing, Literature, and Publishing. She is currently working at a study abroad company and nannying while she applies to MFA programs for Creative Writing. She loves dogs, collecting vinyl records, and running. She has been published in blogs such as Emotionally Naked. Feel free to reach out to her here.