Halfway through the show, I turned off the TV. It wasn’t that bad of a comedy, but all I could do was imagine my daughter Alex, in the lead. Her soulful spunk would’ve added the extra dimension the role needed; I often mentally recast her in parts.

Alex’s career change from actor to exercise instructor was hard for me. I couldn’t understand why she chose to use her rich alto voice to command clients to “feel the burn,” over wowing an audience with a strong blended harmony.

A spunky theater kid, Alex grew up in our city’s stellar youth performing arts community. Watching my daughter cultivate her talents made for fun parenting. I loved showing up early for a front-row seat to see the little girl who dreamed of Broadway capture the spotlight. It became my dream, too.

My daughter was accepted into a prestigious musical theater program

When Alex was accepted into NYU’s musical theater program, I pictured the dress I would wear to her Broadway debut, the friends coming to opening night, and the after-party with champagne. So it threw me when, shortly after graduation, high-intensity interval training (HIIT) classes stole her heart.

“I thought teaching at gyms was just to pay the bills until you got your big break?” I asked when Alex announced her full-time job at Equinox in New York City.

“Acting was my childhood aspiration,” she announced dramatically. “I love performing, but my adult self wants to help people be healthy.”

This altruism was a hard pill to swallow. After years of carpooling to after-school performing arts programs, budgeting for ballet intensives, and being there for the rejections and leading roles, I felt betrayed.

I had been a single mom, and we’d been a team. I planned to ride shotgun straight to the Tonys.

Even after Alex earned her personal training certification, I couldn’t accept her decision. “Are you sure you’re not just taking a break? You’ll audition again, right?” I asked. When COVID shuttered New York’s gyms, and Alex returned home jobless to quarantine with me, and my new husband, my suggestions to reach out to agents and work on her acting website were met with frustration and a profound “No.”

Instead, she launched online kettlebell classes and rounded up clients using Instagram. Her business took off, and our house became her virtual studio. Who was this hardbody, kettlebell-swinging, protein-downing woman? How could she be the same teen who used Andrew Lloyd Weber melodies to sing-tell me about her day throughout high school?

My daughter’s larger-than-life personality is one of the many qualities I adore about her, but turning our house into her gym and film studio was exhausting for us. By August 2020, when she knew it would be too much to ask if her boyfriend could stay with us, Alex returned to Manhattan.

A different house, a new stepfather, her childhood memories boxed in the basement — had it been ridiculous for me to think Alex and I could go back in time? And that’s when I realized the issue: Life had moved forward; all that remained from the past were my expectations of who I thought my daughter would be.

The next week, I reached out to her with an idea to make up for our quarantine bust. “I need a trainer.”

“Aren’t you more the yoga type?” Alex asked through FaceTime.

She had a point. My go-to for movement was a peaceful vinyasa flow, while kettlebells looked like bombs with handles. But now that the pandemic had further exposed a world of injustice and discord, the idea of throwing around a ball of iron felt right.

Not strong enough to join the A-Team, Alex’s thrice-weekly group class, I signed on for private sessions over Zoom. In between deadlift sets, I’d pant out questions. “What are you doing to find a real job?”

My daughter was growing a business, and I was getting into shape

Alex pointed to her tucked glutes, correcting my form. “Mom, this is my job. I’m growing a business.” And she was — soon, she was making more than she ever did in gyms and had total control of her schedule. I was one of many who benefited from her patient encouragement.

Over time, my hunched posture straightened, my lower back pain ceased, and my plantar fasciitis improved. I fully committed when I noticed myself easily lugging overstuffed grocery bags or casually lifting a heavy box.

By the time the vaccine rollout began, I’d graduated to racy-sounding kettlebell moves like “snatch,” “thruster,” and “bottoms up.” The workouts became fun as my technique improved enough to swing, press, and clean.

At 53, I was stronger than ever. Finally passing the basics, Alex sent me a recording of an A-Team class to sample. Fifty minutes of kettlebell fire flew by. The same energy that electrified Alex’s stage performances permeated her teaching style. She’d found her true stage, fresh, naturally comedic, and connected to her audience.

“I did it!” I texted afterward, adding a muscle emoji. “Amazing class; I felt like an athlete!”

I watched the little pre-text bubbles appear on my phone’s screen, followed by, “Welcome to the A-team! Use code: MOMDISCOUNT at checkout.”

When I typed in the code, my total came to $0. Throughout my kettlebell training, Alex had been the adult in charge, sneaking me life lessons and loving me unconditionally. I learned to trust that she knew the right path for her.

It was time to gather up my program and leave the theater. She could handle the show on her own.

We Need To Rethink Encouraging Our Teens To “Follow Your Passion” 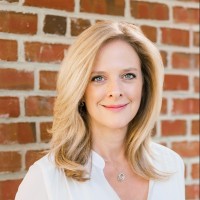 Sherrie Page Guyer is a Virginia-based writer and registered nurse. Her work focuses on health, parenting, and self-discovery. And yes- she still swings kettlebells virtually with her daughter three times a week!

Our teens are back in their rooms, and I am prepping dinner in the kitchen when my husband comes home from work. I gesture to the kitchen bar. It is covered with our daughter’s stuff —hairbands, bobby pins, earbuds, iPod shuffle, textbooks, notebooks, binders, laptop, journal, and the current book she reads. Her messes used…