When my only child left home in August to begin her first year of college, she was supposed to move 3,000 miles away to Claremont, California. Instead, she moved 3 miles away to South Burlington, Vermont. One would assume having her 2,997 miles closer than anticipated would mean I’d get to see her all the time, but I do not. I’m not allowed to.

Right before the coronavirus slapped the planet upside its head, Loy was offered a generous scholarship to attend Scripps College. As much as I knew she’d get an amazing education at the all-women’s school, I almost regretted touring the palm-streaked campus with her last fall. I wanted to keep my baby close. Or, at least closer.

As is so often the case, money—not my whining—was the deciding factor. The University of Vermont also offered her a hefty scholarship, but when all was said and done and the numbers got crunched, it ended up being cheaper for our daughter to go to a school clear across the country than to attend one within walking distance from our house.

Seconds after she accepted the offer, Loy hopped onto Claremont Colleges’ social media and began making friends. In preparation for her new clime, she tossed her snow boots down the basement stairs and stocked up on sandals and shorts. She was ready to be a California girl again (she’d lived there until she was six).

The earth tilted and we were all thrown off balance. Not only did Loy and her pals miss out on their senior year prom and pomp and circumstance, now there was a distinct possibility these newly-minted adults wouldn’t be allowed to shed their adolescent down and fly out of their nests. Every day she and her friends would check their emails and schools’ websites to see whether or not a decision had been made by their respective college presidents: Would there be in-person, remote, or hybrid learning? Most importantly: would students be allowed to live on campus?

In late spring the University of Vermont announced their plan to invite all students back, using a hybrid teaching model. More than a dozen of Loy’s friends, including two of her besties Eamon and Cecilia, would be attending UVM. They would be moving out.

“You regret not picking UVM, don’t you?” I asked Loy after she told me the news. “I mean, what if Scripps doesn’t open?”

One of her eyes looked up from her iPhone while the other stayed transfixed (how they are anatomically able to do that constantly amazes me). “I’m really happy for them, but nah; I’m glad I’m going to Scripps.”

While the days grew hotter and the pandemic yet more suffocating, colleges across America were slowly making their final calls. When her friend Sonam announced that she was for sure flying to Ireland in September as part of Northeastern’s N.U. in Program, they celebrated by taking a socially-distanced walk along Lake Champlain. Loy was equally thrilled for her buddy Cenia, who would be heading to Clemson come fall. She gave Emily a virtual high-five when the University of Denver said they were welcoming students back.

On July 8 Scripps College arrived at the following decision:

The Administration and Board of Trustees of the College have determined that our community can best achieve its mission and maintain safety by offering Scripps classes online during the fall 2020 semester and a residential experience in spring 2021.

“I know,” I replied from the other end of the couch. I couldn’t see her face behind her laptop but I knew she was heartbroken. Sad. Frustrated.

What I didn’t know was how angry she was.

“No, you don’t,” she said, slamming the top of the computer down with a force she rarely exhibited. “I’m sick of being here. I miss going out. I miss seeing my friends.”

My daughter’s friends continued to go out

Even though their social scene should have come to a screeching halt in March, most of Loy’s friends held tight to the (now erroneous) belief that teenagers couldn’t get sick from the virus. For months, Loy flung herself onto the couch after dinner and scrolled through her various feeds with a frown on her face as she watched everyone else having fun. As my husband and I cleaned up, she’d swamp us with a running commentary.

“There’s like a hundred people hanging out down at Oak (local speak for Oakledge Park). No one is wearing a mask.”

Or, “Lilly’s throwing a party tonight at her parents’ camp in Colchester. She’s invited, like, everyone.”

As much as I wanted my child to have fun too, I knew she wouldn’t because she was scared she’d expose her older parents to the coronavirus. Additionally, I’d recently been diagnosed with Non-Hodgkin’s B-cell lymphoma, and while I was doing okay post-treatment, Loy was deathly afraid of killing me.

In late July, Loy marched into the kitchen and announced, “There’s no way I’m living at home while I do remote college. We need to figure something out or I’m gonna go crazy.”

Four seconds after my husband and I agreed that, yes, it’d be best for everyone if she rented a place, Loy called Ella (Colorado College), one of her few friends who socially-distanced, didn’t attend parties, and wanted as much as Loy did, to find some freedom.

The girls found a place to live together and learn remotely

Given that both CC and Scripps had tentative plans to fully open in the spring, the girls needed to find a month-to-month and since Burlington already has one of the lowest rental vacancy rates in the country, their options were limited. The four-bedroom house in a quiet neighborhood by the airport they found was perfect: a year’s lease was not required, and it was not within walking distance of either of their parents’ houses. Now all they had to do was find two more roommates.

When they couldn’t find anyone local to fill the two rooms, Loy shared the openings to all five of the Claremont Colleges, figuring it’d be cool to go to college with someone she should have actually been going to college with. With Vermont having the lowest covid rates in the US, there was a lot of interest. After one FaceTime chat, the girls deemed Monty (Pomona) from Chicago a perfect fit. Two days later Monty’s friend Roz (Smith College) became roommate number 4.

And that was how it came to be that my daughter is attending college three miles from where I sit typing, but since she refuses to see us, she may as well be 3000 miles away. Besides the fact that she works part time at a consignment store, she’s become a zealous political activist. Every night she masks up and attends local BLM and police reform protests, chanting into bullhorns; marching through the streets of Burlington; lying down in front of the mayor’s house for a die-in.

“I’m out in public all the time, Mom,” she texts me. “I’m being careful, but I am exposing myself and I don’t want to take the chance of exposing you or Dad.”

I’m glad she’s getting this first taste of adulthood. I applaud her righteous indignation and fervent beliefs. I’m also thrilled that she is doing well in her remote classes, even the boring one.

I just wish I could hug her.

How Does My Family Strike a Balance Between Caution and Risk? 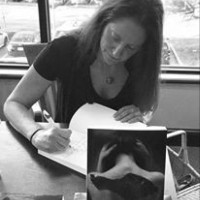 Lisa Kusel is the author of two novels, as well as Rash, A Memoir, her wild tale about her family’s escape from paradise. Find more of her writings on her website. Follow her on Instagram